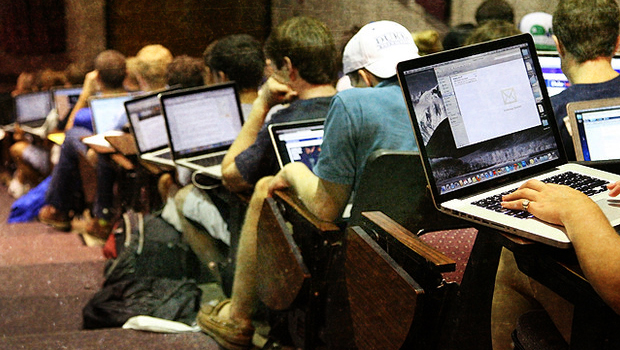 “Could you repeat the question?”

That has become the most common response to questions I pose to my law students at Georgetown University. It is usually asked while the student glances up from the laptop screen that otherwise occupies his or her field of vision. After I repeat the question, the student’s gaze as often as not returns to the computer screen as if the answer might magically appear… Who knows, with instant messaging, maybe it will.

Earlier this month, David Cole, a professor at Georgetown University Law Center, wrote an op-ed piece for the Washington Post about banning laptop computers from his college classroom. As rebelutionaries, his words give us much food for thought.

Brett and I have written a lot about our generation and technology, both here and elsewhere. Many of the themes we’ve highlighted are echoed by Professor Cole:

With the aid of Microsoft and Google, we have effectively put at every seat a library of magazines, a television and the opportunity for real-time side conversations and invited our students to check out whenever they find their attention wandering… As for multitasking, I don’t buy it. Attention diverted is attention diverted.

Another reason for the laptop ban? Note-taking on a laptop encourages students to go into “stenographic mode,” focusing on getting a word-for-word transcript instead of actually listening, thinking and prioritizing the most important themes.

The results of Professor Cole’s experiment were strikingly positive:

About 80 percent reported that they are more engaged in class discussion when they are laptop-free. Seventy percent said that, on balance, they liked the no-laptop policy. 95 percent admitted that they use their laptops in class for “purposes other than taking notes, such as surfing the Web, checking e-mail, instant messaging and the like.”

Brett and I won’t be attending college until Fall 2008, but our day-to-day experience confirms what Professor Cole has observed. We can say we’re “listening” as we work on our laptops, but we know we’re not really listening (or learning) as well as we would if we stopped, turned and gave our undivided attention. More often than not, we’re shooting ourselves in the foot.

This brings us to the question: As rebelutionaries, are we willing to shut down, turn off, and (as my mom always says) “pivot” for the sake of greater competence?

Professor Cole concludes his op-ed piece with these words:

I am sure that the Internet can be a useful pedagogical tool in some settings and for some subjects. But for most classes, it is little more than an attractive nuisance. Technology has outstripped us on this one, and we need to reassess its appropriate and inappropriate role in teaching. The personal computer has revolutionized our lives, in many ways for the better. But it also threatens to take over our lives. At least for some purposes, unplugging may still be the best response.

For our currently college-attending readers: How common are laptops in class at your school? Do you use one? On balance, do you find that a laptop helps you be more engaged in your classes? If not, are you willing to go without it?

Brett and I are interested in hearing everyone’s input on this. Just remember, convenience (by itself) is not an argument here. As young adults, our focus is on preparation. As rebelutionaries, our goal is to travel the path that leads to the greatest level of competence, and that usually means doing hard things.