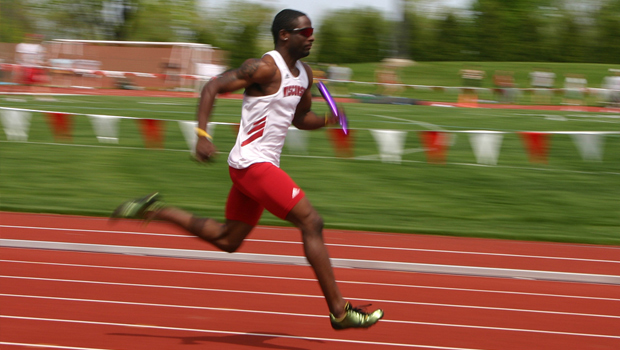 The seconds ticked by. Usain Bolt stared ahead with extreme focus, tuning out the applause and listening closely to the hum of vibration as feet pounded in a steady rhythm against the track. A quick glance behind his shoulder told him that now was the time – HIS time. He sprinted forward and reached behind him. Grasping the baton tightly, he surged forward. The outcome of the race was now up to him. Running with everything in him, he seemed to fly down the last hundred meters. With one final bound he crossed the finish line securing first place for team Jamaica and a world record of 36.84 seconds at the 2012 London Olympics. The crowd roared their approval in thunderous applause.

I remember watching that race on TV with baited breath at each hand-off of the baton. What if somebody dropped the baton? Or what if they actually succeeded in receiving it but later on it slipped out of their hand as momentum, gravity, and sweat assaulted their grip? What if the hand-off wasn’t timed right and they were never able to redeem the precious seconds they lost? So much of the outcome of the race depended on the hand-off.

In Exodus chapters 14 and 15 the Bible records another amazing hand-off. The Children of Israel had just begun their “race” to the Promised Land. By a miracle of God they had managed to put some distance between them and their more skilled competition, the Egyptians. But not for long, nature had ambushed them and placed the Red Sea right in the middle of the track, causing the Children of Israel to slow to a jog in an effort to regroup.

The Egyptians saw their opportunity and dug deep; using their anger and poor-sport-attitudes as fuel, they shot ahead in a surprising burst of speed making a valiant attempt to close the gap between them and their opponents. But little did they know that the years of Israel’s strenuous practice, the leadership of their skilled coach Moses, and the power of their God yielded them an unbeatable team.

The Children of Israel plunged forward in faith putting one foot in front of the other, not even their shoes got wet. Courageously they climbed the last hill and secured the victory. By then Egyptians had fallen hopelessly behind, their lack of faith had led to their demise, and as a result, they would never race again.

The Children of Israel rejoiced in their victory. No longer was the existence of the God of Heaven a debatable tale passed through the generations. God had shown up for them specifically, exactly when they needed Him the most. He had proved that He was there all along, at every practice, every track meet, and now at the most important moment of their career so far—the hand-off. It was the monumental moment in time where the “God of their Fathers” became THEIR God.

This epic event is recorded in Exodus 15:2 where they proclaimed “The LORD is my strength and song, and he is become my salvation: he is my God, and I will prepare him an habitation; my father’s God, and I will exalt him.”

I believe that everyone has a hand-off moment. A moment where the faith of your parent’s becomes your faith, when you embrace the beliefs of the church as your beliefs, and when Jesus Christ becomes your God and personal Savior—for life. It’s what you do with that moment that determines the outcome of your “race”.

I think that I am in the middle of my “moment” right now. After being homeschooled pretty much my entire life I am about to go to college in January even though I’m only 17. As I look at my life I have to wonder, have I used my time at home wisely? Have I trained well? Has the plethora of different trials and obstacles I’ve faced successfully strengthened my faith muscles? Have I listened to the advice and correction of my God-given coaches, whom I’ve affectionately dubbed mom and dad? Am I prepared to give an answer for what I believe and why I believe it? Have I persevered and done hard things? Am I ready for the race of life?

These questions fill my stomach with pre-race butterflies. But I believe that God has mercifully packed some simple answers into the very verse that tells us about the Israelite hand-off so long ago.

I think that this is a blueprint for success when it comes to our hand-off. It’s all about an ongoing relationship with God. This relationship won’t just be confined to the hand-off moment itself, but it will extend before it, through it, and long after it. “Wherefore seeing we also are compassed about with so great a cloud of witnesses, let us lay aside every weight, and the sin which doth so easily beset us, and let us run with patience the race that is set before us…” (Heb. 12:1)

is a 17-year-old who loves sports, hiking, writing, and life in general. She has a passion for bringing others closer to Jesus, and helping them realize that no matter where life finds them, they’re just a prayer away from an exciting reconnection experience with Him.