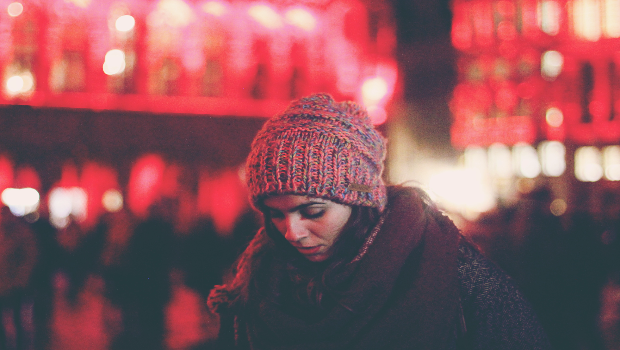 Shame is something many people carry around like a bag of rocks.

Let’s face it, we’ve all done something we regret. It could be that you didn’t say what you needed to before it was too late, or maybe it was something you did say. It could be something you looked at late at night when no one else was around to see the computer screen, or giving into peer pressure.

It might be something I just listed or something completely different, but whatever it is can weigh on a person, making them feel that no matter what they do, nobody (even God) could be able to forgive them.

Are you walking around with a bag of shame?

Is there something that you have done that you don’t want anyone to find out because if they do, they just wouldn’t understand?

1 John 1:8-9 says, “If we claim we have no sin, we are only fooling ourselves and not living in the truth. But if we confess our sins to him, he is faithful and just to forgive us our sins and to cleanse us from all wickedness”

This verse is so powerful because it shows us that everyone sins. When we act like we are perfect and don’t struggle with sin – we are only fooling ourselves.

No one is perfect.

We see many “heroes of the faith” write about struggles in their own lives.

This is coming from Paul after he had been a Christian for a while. He was in the middle of writing an extremely deep theological letter (to the Romans). Even when it seemed like he might have “had it all together,” he didn’t.

You see, God does not use “perfect people” – they literally don’t exist. All throughout the Bible we see very imperfect people doing unbelievably big things for the kingdom of God.

Look at David for example; he was an adulterer and a murderer. He did some pretty bad stuff, but do you know what God said? “‘I have found David son of Jesse, a man after my own heart.’ (Acts 13:22)” What an honor it would be to be called “a man after God’s own heart!”

David wrote many of the Psalms and was open and honest about his struggles. Now, a few thousand years later, people are still reading his words and learning more about God in the process.

You can accept forgiveness.

Many people ask God for forgiveness, but asking for it and accepting it are two different things.

Accepting forgiveness means that you let go of your shame. It means that your life will look dramatically different. You no longer have to pick up that bag of shame every morning – it has disappeared. You can leave your rocks, dirt, and grime at the foot of the cross and never pick them back up.

This is the freedom that Paul talks about in Galatians 5:1.

“It is for freedom that Christ has set us free. Stand firm, then, and do not let yourselves be burdened again by a yoke of slavery.”

Not only can you accept forgiveness from God, but also from people. Now, this can sometimes be difficult because people don’t always act with as much grace as Jesus does, but asking for forgiveness can be a major step on the road to recovery.

Finding an accountability partner, someone you can trust, can be an amazing thing. Be honest and open with one another. Share what’s going on; talk about how God is acting in your life. We were not meant to live this life alone. All throughout the Bible we can see examples of the body of Christ coming together to “do life” with one another. “As iron sharpens iron, so one person sharpens another. (Prov. 27:17”

God wants to use you.

Joseph was this kid in the Old Testament who was a “daddy’s boy.” He let that get to his head and started telling his brothers about some dreams he was having. In these dreams, Joseph’s brothers were bowing down to him.

Well, long story short, Joseph’s brothers sold him as a slave. Eventually he found himself second-in-command over all of Egypt! Joseph ended up saving a lot of people’s lives – including his brothers’.

He told his brothers “You intended to harm me, but God intended it for good to accomplish what is now being done, the saving of many lives. (Gen. 50:20)”

Your life might seem pretty messed up right now – trust me, I know the feeling. But not only can God use you right now, He wants to use you!

is a 17-year-old, homeschooled, farm girl who has a passion for youth ministry and global missions. She enjoys baking, reading, and eating cookie dough. Katelyn loves to hang out with friends and is very involved in the Student Leadership Team at her church. Check out her blog at: www.katelyngraceblog.weebly.com