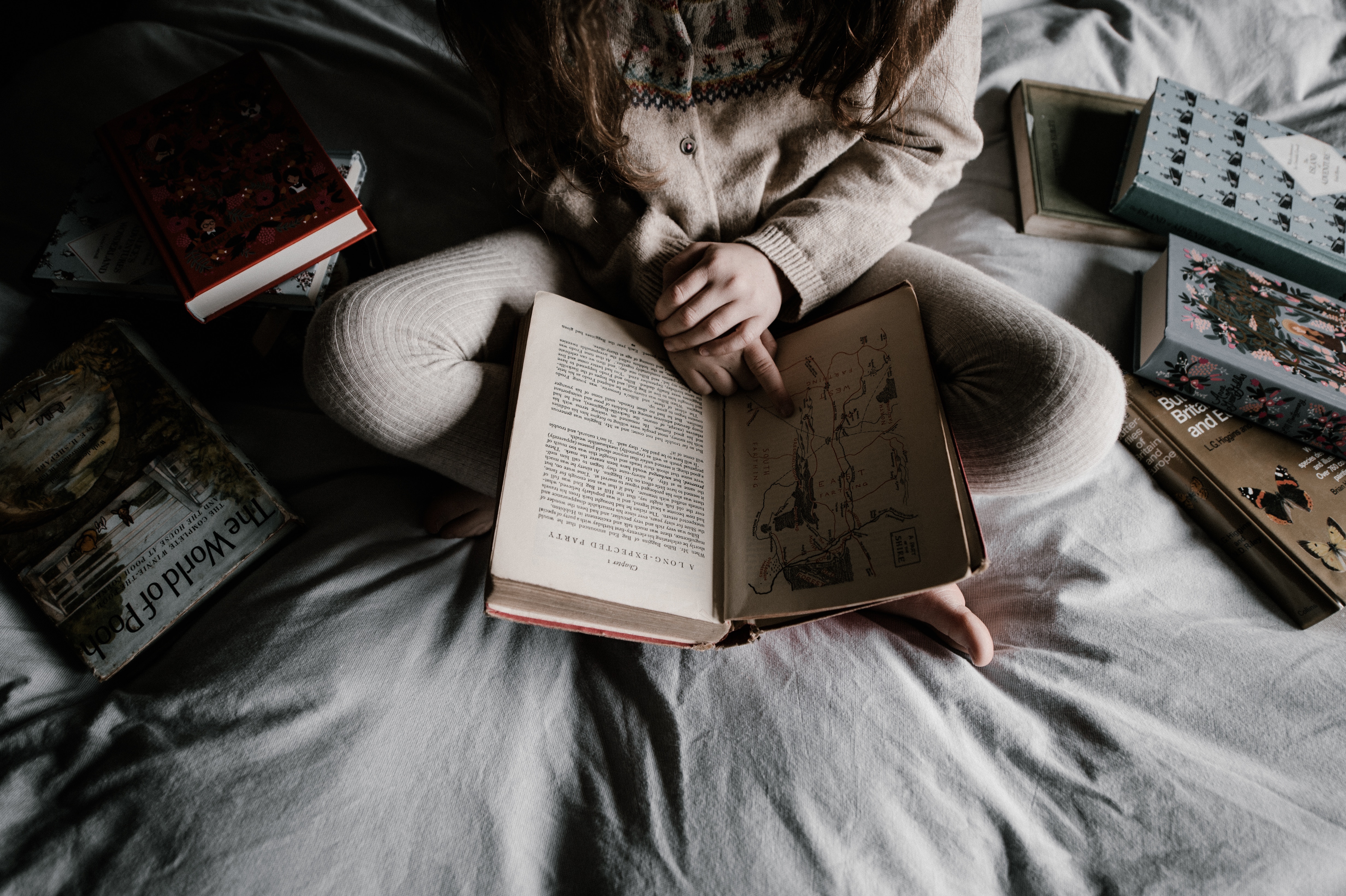 I still remember the delight of sitting on the living room floor and drinking hot chocolate while my mom read The Lord of the Rings aloud to me and my brothers.

I remember how invested I was in each and every character, the excitement of seeing them struggle and overcome, the surprise of each plot point. I remember trying to decide who was my favorite character (pretty much every one of the central characters appeared on that list at some point). I remember bouncing up and down on the floor at the most exciting parts.

Read-aloud books in the evenings were one of the ways I learned to love stories. I don’t know if I would originally have read The Lord of the Rings if my mom hadn’t read it aloud—at least, I doubt I would have been as invested in the story.

My brothers and I used to read voraciously. What free time wasn’t spent outside was spent with a book. We would tear through fantasy, mystery, sci-fi, and historical fiction within days or even hours (we still do sometimes).

But as I grew older, two things happened.

First, high school and college classes happened. Suddenly I had way less time for any reading that wasn’t for a class. When I did pick up a book “for fun,” it was probably something I could read easily and quickly (I still haven’t made it through The Silmarillion, and it’s been a long time since I’ve attempted Dickens).

Second, I discovered the need and joy of reading nonfiction.

I’d always read some nonfiction, of course. Those were the books I had to convince myself to pick up—the ones that weren’t so much fun. But through the example of friends and parents, I became more intentional. I made to-read lists. I read books by Piper, Fitzpatrick, and others. My school curriculum helped, too, as it assigned authors like Augustine of Hippo and Francis Schaeffer.

Many of those books were great encouragements in my spiritual walk. Some completely changed my thinking on a subject, and I can honestly say there were a few that changed my life. Desiring God by John Piper, A Gospel Primer by Milton Vincent, No Ordinary Marriage by Tim Savage, and the works of Francis Schaeffer were a few of the most impactful.

But along the way I bought into a lie—the lie that stories were a sort of second-class literature, and those who read nonfiction were somehow more spiritual. I started to feel just a little bit guilty anytime I read fiction rather than a “teaching book”.

But along the way I bought into a lie—the lie that stories were a sort of second-class literature, and those who read nonfiction were somehow more spiritual. Click To Tweet

But God has given us stories for a reason, and they’re immensely valuable to our spiritual life. What’s more, their value doesn’t lie just in teaching, as though the best books were the ones that merely boiled down to parables. Their value—at least in large part—is in opening our eyes to wonder.

The Way of Wonder

Trevin Wax puts it this way:

The best writers and artists are driven not by the need to show you themselves, as if to invite you into the prison of their minds, but by the desire to open windows so that you get a glimpse of glorious realities that stand outside and above us, enduring truths that do not depend on intellectual fads. They are not content to merely amuse us as we pass our time in a wonder-less era of cultural fatigue. They startle us with truth and goodness and beauty.

The best stories remind us of goodness—and they show us what it looks like. In a very real, personal, visceral way, we get a glimpse of the reality behind words we use so often. Things like beauty, redemption, good, evil, courage, grief, and joy are displayed through the trials and choices of the characters. We get to see and feel the pain of decision, the glory of heroism, the beauty of sacrifice.

I’m currently rereading The Warden and the Wolf King by Andrew Peterson, the fourth and final book in The Wingfeather Saga. This was another read-aloud series for our family a couple years ago. It’s a moving story, and this second time through it’s made me cry more than once. Why? Because it’s so much deeper than just entertainment. Biblical truth about the battle of good and evil, the greatness of God, and the gospel itself flows like a river beneath the story and runs through the plot and the characters. It’s not a parable or allegory, but it’s informed by the author’s deeply Christian worldview.

That’s just one example. From Beowulf to Mansfield Park to The Silmarillion, Christian fiction authors open our eyes to darkness and light. They help us to see the beauty of the good and the ugliness of the evil. They let us see marvel at heroism, sacrifice, and the eventual triumph of the right.

Christian fiction authors open our eyes to darkness and light. They help us to see the beauty of the good and the ugliness of the evil. They let us see marvel at heroism, sacrifice, and the eventual triumph of the right. Click To Tweet

The best stories lead us to wonder. At God’s world, at the gospel, and at Himself.

What about stories by unbelieving authors? That’s a larger discussion for another day, but for now we can say this: don’t these, too, reflect the reality God has made? Even though unintentionally, an atheist author still writes about the clash of good and evil and the triumph of justice one way or another. No one wants to see the bad guys win. Like it or not, even secular books are imbued with echoes of God’s moral code, the grandeur of His creation, and the story He’s writing.

The Importance of Beauty and Truth

It’s tempting to prioritize either fiction or nonfiction in our Christian lives—to think that one teaches and edifies, and the other merely entertains. But the reality is that both have the potential to teach, edify, and build us up.

We need rock-solid truth communicated through meaty sermons and books. We also need that same truth echoed in the beauty of stories, in characters and plots and fictional worlds that move us to wonder.

If you’re a creator—whether a writer (fiction or otherwise!), a musician, an artist, or an engineer—this is important for you. Use the talents God has given you to display His glory to the world. Proclaim the truth in whatever ways God has given you.

And maybe, just maybe, our lives should do the same thing. Just as the truth an author believes will seep into the stories they write, the truth we speak and say we believe should seep into the way we live. Our lives should manifest the “sweet aroma of the knowledge of Him,” like the smell of spring to the watching world. (2 Corinthians 2:14) We should live out the gospel through the beauty of loving, sacrificial words and actions. The truth is to transform every aspect of our lives.

Let’s write and live this way—founded on truth, and formed in beauty.