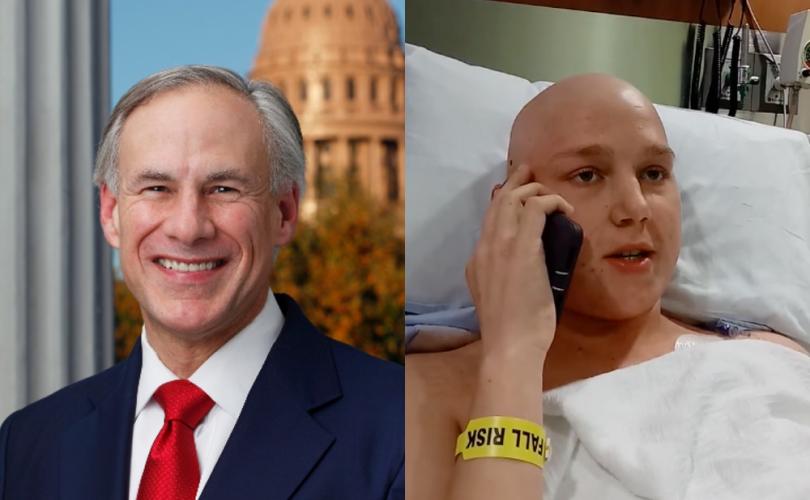 If you were granted one wish, what would it be?

Most teenagers can answer this question without a thought: “To visit my favorite sports player, to meet my favorite band, to embark on a dream get away…”

But what happens when a sixteen-year-old state champion football player finds out that his sports injury was a tumor dangerously close to his heart, and he has aggressive bone cancer resistant to any radiation treatment?

He is rushed to the hospital, told his ability to walk is gone, and yet he says, “Then I’ll just preach from my wheelchair.”

When contacted by the Make a Wish Foundation, an organization that arranges experiences (also known as “wishes”) to children fighting for their lives, anything a teenager could desire was accessible at his reach. But he pushed to side every wish for himself, and requested a wish for thousands:

To abolish abortion in his home state of Texas.

He asked to have a meeting arranged with Governor Gregg Abbott, where he could share his aching heart for the unborn and urge for the end of abortion in Texas.

That’s the story of Jeremiah Thomas, a young man defying low expectations and serving God in his suffering.

The Make a Wish Foundation managed to organize a call with Governor Abbott, and Jeremiah was given the opportunity to speak with him.

Confident in tone, Jeremiah knew what to say, his passion for a pro-life generation evident as he shared about his outreach and dying wish over the phone with Governor Abbott.

“For my wish, I wanted to talk with you and discuss a bill of abolition”, Jeremiah said. “A recent poll showed that 68 percent of Texans want abortion abolished, so Sir, you would be representing the demand of Texas if you passed this bill. In conclusion, with this, I want you to treat abortion like an act of murder and should be punished by law.”

Jeremiah turned on the speaker and held up his phone to the camera taping the call.

“Your wish,” Governor Abbot told Jeremiah, “is on the Republican party platform position and that’s what we’re going to be perusing this next legislative session, to outlaw abortion altogether in the state of Texas. And so your wish is granted.”

Jeremiah beamed with joy. Cancer has thrown traumatic obstacles in his path, stealing his dream to play college football and his ability to walk. Even still, God laid a burden on his doorstep and Jeremiah handled it with wisdom. He wanted to do something that left an imprint of impact—-for other people—-while he still can. And he did. What a day it will be when abortion is put to an end in Texas.

As a Gofundme page explains, “Jeremiah is an all-star, state champion. But it was his love for Jesus and the family ministry to abolish abortion that taught him to fight harder.” The page further describes Jeremiah as a “brave young man,” who has no “anger, self-pity or a woe is me attitude.”

He doesn’t know how long he has on this earth. Yet in the time he has here, he chooses to love selflessly, to walk by faith, to speak for the unspoken and to live in the light of eternity—-challenging you and I to do the same.

Will we take him up on the challenge?

“Yet if anyone suffers as a Christian, let him not be ashamed, but let him glorify God in that name.” (1 Peter 4:16)

“Blessed is the man who remains steadfast under trial, for when he has stood the test he will receive the crown of life, which God has promised to those who love him.” (James 1:12)

For Further Information on Jeremiah Thomas:

Click here to learn more about Jeremiah’s letter to this generation via video.

Click here to learn more about Jeremiah’s letter to this generation via blog.