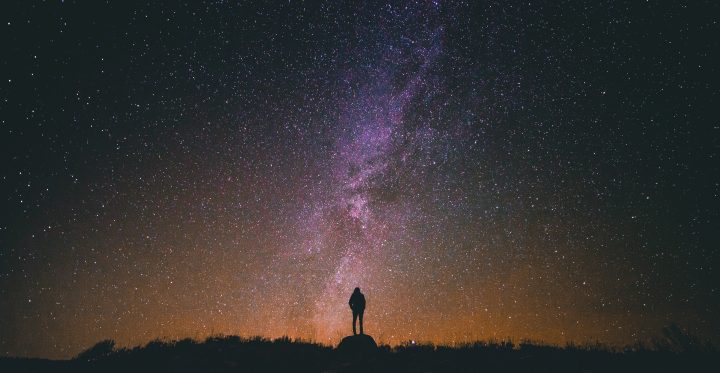 When the light of the sun slips below the horizon, and darkness falls, the stars shine their brightest.

From down on this fallen earth, we see them glistening from afar and wonder. We see them, we imagine them, we dream of them. We gaze upon them unabashedly, for they are unquestionably beautiful, and though we try and count their number, we are left breathless and utterly fascinated by the sight of them.

Perhaps we’re left in such awe because they seem to provide a reprieve from our own trials and tribulations. Maybe we hold them in such high regard because they are brighter than any light this dark planet can hope to furnish us with. Or, very possibly, we admire them because our worries and anxieties simply pale in comparison to their beauty and “bigness.”

In Isaiah 40:26 it is said, “Lift up your eyes on high, and see who has created these stars, the one who leads forth their host by number, He calls them all by name; because of the greatest of His might and the strength of His power, not one of them is missing.”

They may shine, but this downtrodden world is a wormhole for all that is good; full of endless perils, it seeks with all that it has and is to wholly extinguish the little light yet remaining. At times, this life we live can feel so much like a brutal struggle just to stay faithful to who we are called to be and what we believe in. We strive to hold onto hope, fearing that it shall slip from our grasp.

But though hope sometimes seems lost and even bleaker despair may hover ominously, the smallest of lights can still brighten the darkest of nights, and in His great mercy, our Father in heaven has provided a way of escape for those wayward ones. And we, His children––regardless of how we may be faring––have a responsibility and obligation to provide the light that illuminates the lives of others.

The Light We Choose to Give

In painting a vivid picture of Man’s sheer inadequacies and deficiency, the Bible uses analogies and correlations to draw stark contrasts between Light and Darkness. Take John 3:19-21 for instance:

“This is the judgement, that the Light has come into the world, and men loved darkness rather than the Light, for their deeds were evil. For everyone who does evil hates the Light, and does not come to the Light for fear that his deeds will be exposed. But he who practices the truth comes to the Light, so that his deeds may be manifested as having been wrought by God.”

Light in of itself is a profound rendering for kindness, virtue, purity, and most of all, love. In much the same way, Darkness is an acute depiction of sin, in its many forms and guises. With this in mind, we must take time to ask ourselves this very question: If the outpouring of light is a metaphor for kindness and virtue, what then is the light we choose to give?

Now, try and picture this: with the way in which we interact with others in our everyday lives, measuring the brilliance of our light, we can now begin to see something of what this looks like upfront. From our vantage point, we perceive people with great orbs of light, some with small, barely-discernible lights, and others with none at all.

Those with the feeble, barely-seeable lights, are those persons whose thoughts are turned so inward that they consume the light they would emit––a clear illustration of selfishness.

Likewise, those with lustrous spheres of irradiant light, are those who would be deemed altruistic, considerate, and wholly ungrudging in the light they have to give––a characterization of unselfishness.

So are you altruistic? Are you considerate? Will you be wholly ungrudging in the light you have to give? And are you willing to sacrifice your own needs and comforts in order to both literally and figuratively, be the spark the lights the dark?

Who knows? With a kind word, you just might inadvertently avert a horrendous tragedy from occurring and bring hope to a hopeless soul. Take the scenario of a lonely misfit, who has spent his life playing prey to the constant abuse of devaluing and disparaging words. At long last, this rejected, lonesome individual might decide to end it all by taking his rage out on others.

With one kind act, you can straightaway give such an individual hope, where once he had none at all. With very little effort, you will always have the prospective chance to fill the void of his spirit with sudden, renewed luster––thus preventing his soul from being laid waste by the ravaging darkness.

Many lose that hope, and to them, the light that once shone so clearly is now wholly consumed, and they are at last, utterly overwhelmed and devoured by depression and despair.

Just like beacons of unalloyed light shining out over a sea upon which night has fallen, we should aspire to provide the candle to these despairing ones, so that they might at last burn away the black webs of fear, dread, and hopeless foresight that has brought such anguish to their burdened souls.

“Those who have insight will shine brightly like the brightness of the expanse of heaven,” reads Daniel 12:3, “and those who lead the many to righteousness, like the stars forever and ever.”

Those who indeed “shine brightly like the brightness of the expanse of the heavens” just like the stars above, are the embodiment of that selfsame candle once spoken of: the flaring light that illuminates the lives of others and that flickering spark that lights the darkness abounding.

“Do all things without grumbling or disputing,” Philippians 2:14-16 tells us, “so that you will prove yourselves to be blameless and innocent, children of God above reproach in the midst of a crooked and perverse generation, among whom you appear as lights in the world, holding fast the word of life, so that in the day of Christ I will have reason to glory because I did not run in vain nor toil in vain.”

How will your light shine?