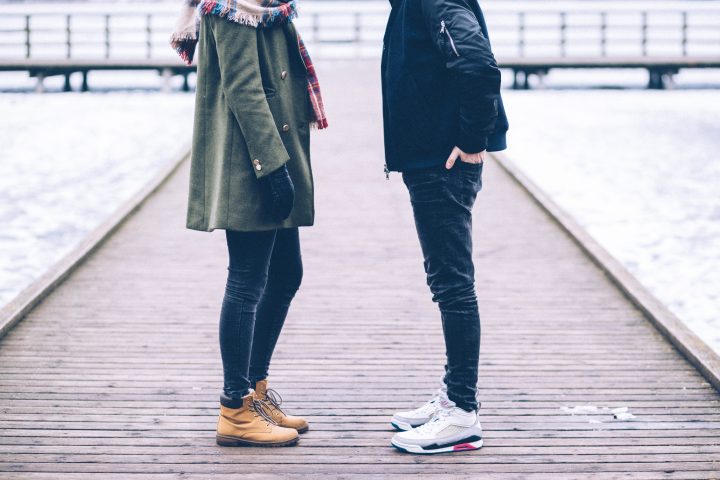 Editor’s Note: We’re thrilled to welcome Gary Thomas to the Reb today! His book The Sacred Search is an excellent resource for Christ-centered relationships and choosing a spouse wisely. We highly recommend it!

When Tom Cruise—playing Jerry Maguire—uttered those now famous words, “You complete me,” he was married to his second wife, Nicole Kidman. Cruise and Kidman divorced five years later, after which Cruise entered a romantic relationship with Penelope Cruz, followed by a third (also unsuccessful) marriage to Katie Holmes.

All of which might lead the cynic to suggest that it actually takes a village to “complete” Tom Cruise.

This notion that we need another person to complete us is, in fact, one of the more misguided myths alive today. If, when you say, you’re looking for the “one” and the “one” isn’t Jesus, you’re setting yourself up for much disappointment in marriage.

“Why” Is Just As Important as “Who”

I wrote The Sacred Search because I noticed that many Christians were getting married for roughly the same reasons that non-Christians get married: romantic feelings, sexual chemistry, and compatibility while dating. In spite of living in a generation surrounded by divorce, young singles continue to follow the same prescription for what supposedly makes a successful matching. It’s what they see celebrated in movies and song. Even though millions of people around them who got married for the same reasons are paying the price with unhappy marriages, they just assume it’s going to be different with them.

This remains true in spite of the fact that when it comes to infatuation, neurologists tell us it can’t be sustained more than twelve to eighteen months. You may get a good roller coaster ride of emotion that will take you from one Christmas to the next, but don’t expect it to get you to the following Fourth of July. Do you really want to get married—or choose not to get married—because that infatuation is or isn’t present?

And when it comes to relational compatibility while dating, all that tells you is that you’d be compatible while on vacation, but most couples only take about two to three weeks of vacation a year. It says nothing about how well you’ll do when facing life challenges such as unemployment, childlessness, catastrophic medical problems, or just the day-to-day challenges of having a job and raising kids.

All of this is why, in The Sacred Search, I ask, “what if being in love with someone isn’t a good enough reason to marry them?”

Most people begin the marital search by seeking the “who”—trying to discover that missing “soul mate.” I want them to begin the search by asking “why”—“why do I even want to be married in the first place?” Click To Tweet

Most people begin the marital search by seeking the “who”—trying to discover that missing “soul mate.” I want them to begin the search by asking “why”—“why do I even want to be married in the first place?”

Marrying for the Right Reasons

It’s not that the “who” isn’t important, it’s just that asking “why” first sets us up to make a better choice about the who.

Jesus suggests that a Christian’s agenda should be to “seek first the Kingdom of God and His righteousness” (Matthew 6:33). If marriage is a mutual pursuit of God’s Kingdom and growth in righteousness, that’s going to have a huge impact on who I choose to marry. Who, indeed, is the best person I can find with whom I can fulfill that call? Will this person inspire me to give my all for God? Will this person help me become the kind of person God wants me to be?

If we want to marry well, we have to begin by extolling the practice of marrying for the right reasons. I believe Matthew 6:33 points us in the best direction, fortifying us against the fog of infatuation.

Zeus and the Myth of the “Soul Mate”

The origins of the “soul mate” (that there’s one person you are “meant” to marry) are found in the writings of Plato, whose character Aristophanes surmises in The Symposium that there was once a “super race” of androgynous humans that made an attempt to overthrow the gods. This super race consisted of “round” people, comprising both male and female in one person, and in that state they were getting too powerful, so Zeus said, “I shall now cut each of them in two . . . and they will be both weaker and more useful to us through the increase in their numbers.”

In Plato’s view, romantic love makes us weaker, not stronger, as well as causing us to live most of life in a desperate attempt to find and then keep our “soul mate.” Many people do, in fact, live this way—a constant hunt to find their other human “half,” and then desperately attempt to keep that half. Do I want to live my life in a relationship born out of desperation and sustained by fear? Is that really the key to happiness?

A scriptural view of human nature couldn’t be more different. Our problem is not that we’ve been sliced apart from an ancient human half, but that we have been separated from God by our sin and need to be reconciled to God through the work of Jesus Christ on the cross. Once we are reconciled to God, He brings us together as humans. Marriage is a glorious reality, but it is secondary to our spiritual identity as children of God and something that won’t even exist in heaven (Matt. 22:30).

Our search for a life mate, then, isn’t one of desperation, but rather one of patiently looking for someone with whom we can share God’s love and live out God’s purpose.

Plato’s “soul mate” philosophy circumvents the concept of applying wisdom and replaces it with trying to mystically discern whether you are “meant to be” with someone. But discerning someone’s character, values, and suitability for marriage is hard work. It takes time, counsel, and a healthy dose of objective self-doubt. Identifying someone as “God’s chosen” is comparatively easy. You “feel” it in your gut. It seems right. You can’t imagine anyone else. You must have found the one!

Our search for a life mate isn’t one of desperation, but rather one of patiently looking for someone with whom we can share God’s love and live out God’s purpose. Click To Tweet

Rather than suggesting there is one “right” choice for marriage, the Bible encourages us to use wisdom, not destiny, as our guide when choosing a marital partner.

Proverbs takes a pragmatic approach: “A wife of noble character who can find?” (31:10). This verse assumes that we are involved in a serious pursuit, actively engaging our minds to make a wise choice based on character. And the top thing a young man should consider is this: “Charm is deceptive, and beauty is fleeting; but a woman who fears the LORD is to be praised.” (Prov. 31:30).

This says absolutely nothing about “feelings.” It even warns against putting too much emphasis on physical attraction. Instead, this verse makes a woman’s faith the defining characteristic of her suitability to be an excellent wife.

You Get to Choose—Choose Well

In 1 Corinthians 7:8–9 Paul leaves the decision whether to get married up to us: “Now to the unmarried and the widows I say: It is good for them to stay unmarried, as I am. But if they cannot control themselves, they should marry . . . ”

Paul was simply modeling the pragmatic approach of Jesus, who spoke matter-of-factly about people who were born eunuchs (that is, able to live a satisfying life without ever becoming sexually active) and others who “choose to live like eunuchs for the sake of the kingdom of heaven” (Matt. 19:12).

Did you get that word choose?

It is not wrong if you want to get married; it is not wrong to want to stay single. We shouldn’t feel forced to marry or feel prohibited from marrying; this is one of those life decisions God leaves up to us. But God does care about why we decide to marry and the kind of person we marry.

In 1 Corinthians 7:39 Paul clearly leaves the choice of marriage up to us in the most explicit of terms: “She is free to marry anyone she wishes, but he must belong to the Lord.”

Since Scripture tells us that it is our choice whether we want to get married and who we want to marry, we shouldn’t demand that He make the decision for us in some sort of mystical way. We get to choose. This isn’t a denial of God’s providence, nor does it preclude God leading two people together in certain cases. Rather, it’s the Bible’s way of saying that while marriage is really important, it’s also something God lets us decide whether we want to be participants in, and who we want to be participants with. God has given you an awesome responsibility, so choose wisely.

If we make too much of marriage, we make too little of our relationship with God. Click To Tweet

So if I were single, I’d look for a person who looks to God to complete her. And I’d run from anyone who might bury me with the expectations that I ever could.

Gary Thomas’ writing and speaking focuses on bringing people closer to Christ and closer to others. He is the author of 18 books that together have sold over a million and a half copies and have been translated into more than a dozen languages. These books include When to Walk Away: Finding Freedom from Toxic People; Sacred Marriage: What if God Designed Marriage to Make Us Holy More Than to Make Us Happy?, The Sacred Search: What If It’s Not About Who You Marry, but Why?, and the Gold Medallion award winner Authentic Faith. Gary is active online through his website, twitter (@garyLthomas) and Facebook.