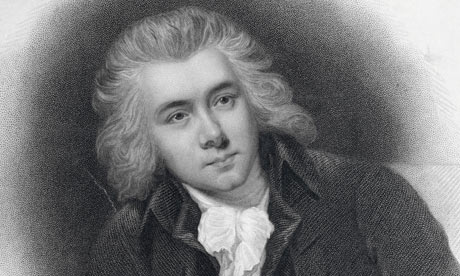 “Greater love has no one than this, that someone lay down his life for his friends” (John 15:13).

William Wilberforce is one of my personal heroes, and I wish more people knew his story. So many people have never heard of him, and if they have, it’s only the “obscure person in a history textbook” kind of heard of him.

His life and work affected culture, politics, society, and Christianity in a tremendous way. He did more for people’s freedom than most people have ever been able to claim.

How did he make a difference? He fought patiently his whole life for the freedom of his fellow men, people who were created in image of God and precious, even when society in general did not recognize that. His beliefs were radical because slavery was accepted as a normal part of society and a necessary part of economics at the time. His work was real and tangible and it made an impact on the world.

He did it by speaking the truth and loving the people that God created enough to lay down his life for them—not by death but by a living sacrifice, like Romans 12:1 describes. He recognized that when one member in the body of Christ suffers, we all suffer together with them. He laid down his reputation and popularity so that other people could live in freedom.

Sometimes I read a biography about someone and am so impressed and inspired by what they allowed God to accomplish through them that I want to find out everything I can about them. It can be easy to say one thing in front of a crowd but to live faithfully when no one is watching is often a different matter. I want to see if they were authentic; I want to see if they were the “real deal.”

The more I read about William Wilberforce, the more I saw that he was who he said he was. He wasn’t perfect, as no one is, but his life is worth learning from. We’re in need of godly examples these days to look up to and I think that there’s a lot that can learned from his life.

Born in Hull, England in 1759, William Wilberforce grew up in a slightly religious home–but his parents didn’t encourage him to have a personal relationship with Jesus Christ. He was exposed to Christianity through his uncle and aunt, who he lived with for a season after his father died, and John Newton, the famous slave trader-turned-pastor, who was close to his uncle and aunt and became a fatherly influence in young William’s life.

When his mother realized that he was being influenced toward the gospel, she removed him from his religious relatives and the seeds that were sown were trampled over and shoved aside, but they weren’t forgotten altogether.

Even though he attended Cambridge, he wasted time and money, neglecting his studies and partying. Yet God was watching over him, and when he traveled through Europe with a friend, his life was changed forever. He was once again exposed to the gospel through his friend and gave his life to the Lord.

After he gave his life to the Lord, with his whole life and perspective changed, he was confused about his future. Did following God mean that he was supposed to resign from his political position and go full time into ministry (at this point he had been elected and occupied a position in Parliament)?

He went to John Newton for advice. The wise, old pastor, who had seen a lot of evil in the world but also experienced the life changing grace of God, encouraged him to stay in politics, knowing that he was needed in this area. William heeded his mentor’s advice and went on to serve God and his fellow brothers and sisters in Christ in a very powerful way in the political realm.

William Wilberforce struggled with a health condition (probably what we now know as ulcerative colitis) from a fairly young age. He had the perfect reason to quit and throw in the towel–but he didn’t let it stop him from what he felt God’s calling on his life was. He almost died from it at age twenty-eight, but after recovering, he pressed on.

It proves that you don’t have to be a healthy, physically strong person to make a difference and have God use you to do great things. In fact, God loves to use those who are weak.

3. Join forces with other people who are working toward the same goal.

William Wilberforce knew that he couldn’t abolish slavery on his own. He first needed the blessing and power of God in his work, and also the help of other likeminded people who were passionate about the same thing.

Sometimes it can be tempting to think we can do it alone but God designed us to work together and use our different gifts to reach towards a common goal.

William Wilberforce valued this kind of community and had many friends, from Olaudah Equiano, a former slave who published a book about his experiences in the hope of bringing awareness to people’s eyes, and many other abolitionists, to many politicians, including ones he didn’t completely see eye-to-eye with, but was able to work together with.

He was able to win people over to his way of thinking by treating other people in a loving way, eloquently stating his points and appealing to their consciences instead of angrily demanding his way. He said:

“We have different forms assigned to us in the school of life, different gifts imparted. All is not attractive that is good. Iron is useful, though it does not sparkle like the diamond. Gold has not the fragrance of a flower. So different persons have various modes of excellence, and we must have an eye to all.”

4. Be a loyal friend, but don’t let that stop You from standing up for what Is right.

William Wilberforce was very close friends with William Pitt who became the prime minister. They supported each other in the political realm and also as friends. Even though they were likeminded on many topics there were times when William Wilberforce had to stand alone even if that meant going against his friend in front of the whole parliament for something he believed was right.

I’m sure it was very difficult and would have been much easier to side with the popular idea, especially if going against it could strain a friendship, but when it’s a matter of the conscience or conviction from the Holy Spirit, Wilberforce realized that God’s ways have to come first.

William Wilberforce was a very busy man, but he didn’t let that completely distract him from spending time with his family and raising up the next generation for the Lord. He loved to invest in people and spent much time corresponding with friends.

His relationship with Jesus Christ was at the center of his life. Echoing the idea in 1 Corinthians 13, He started it this way:

“If there is no passionate love for Christ at the center of everything, we will only jingle and jangle our way across the world, merely making a noise as we go.”

He proposed bill after bill with no forward motion, but he didn’t let that dictate failure to him. As long as he was alive he would keep fighting.

Years later, after much prayer and slowly winning people over to the truth, a bill was passed that stopped the slave trade. It was a step in the right direction.

He didn’t stop there and by this time many other had joined his cause. Three days before he died, at age 73, he heard that a law would be passed that made it illegal to own slaves. His life’s work was finished.

I think it’s so beautiful that God let him live to see what he had given his whole life for, accomplished.

7. Be fully in the world but not like it.

Even today, it’s hard to find a politician who will stand for everything they believe is right, regardless of how it will make them appear. We desperately need more Christians who will stand up for what is right and live out their faith in the workplace and community without fear of the backlash that will come of it. We can’t just leave our identity at the door because we might lose popularity.

You might be thinking, “That’s a nice idea but it doesn’t work in real life. Besides, back in the sixteenth century when William Wilberforce was alive, it was easier to change things.” Some things may have been easier and some harder, but people had the same sinful hearts that they have today.

Slavery was an accepted part of society; it was the norm—not something to be questioned. It wasn’t only legal; people didn’t even think it was wrong.

Wilberforce’s work was also before the Victorian era, where morality and honor became more popular and praised in society. It was actually the opposite; ungodliness was rampant and there were a lot of similarities to today.

I think that William Wilberforce helped to change that and help set in motion some of the standards that the Victorian era was well known for years later. He’s most famous for his work as an abolitionist but he also worked very hard to bring Christian principles to light in society.

So if your heart is burdened and you want to stand up against abortion, or human trafficking, or any injustice that disregards the intrinsic value of God’s children, please don’t be too discouraged. With God’s grace it has been done before. What is impossible with men is possible with God.

I know that we know and believe that, but when it feels impossible, it can be strengthening to our faith to think about when God has done it before. You CAN make a difference. Even John Wesley, the famous evangelist, wrote to William Wilberforce saying, “Unless God has raised you up for this very thing, you will be worn out by the opposition of men and devils. But if God be for you who can be against you?”

Here’s a few more of my favorite quotes that Wilberforce wrote:

“If to be feelingly alive to the sufferings of my fellow-creatures is to be a fanatic, I am one of the most incurable fanatics ever permitted to be at large.”

“I would suggest that faith is everyone’s business. The advance or decline of faith is so intimately connected to the welfare of a society that it should be of particular interest to a politician.”

“It makes no sense to take the name of Christian and not cling to Christ. Jesus is not some magic charm to wear like a piece of jewelry we think will give us good luck. He is the Lord. His name is to be written on our hearts in such a powerful way that it creates within us a profound experience of His peace and a heart that is filled with His praise.”

God has used people like Wilberforce in the past, and He continues to work today. Are we willing to be used by Him?

is a writer and creative in her twenties, living near the west coast of Florida and desiring above all else to live surrendered to the One who reigns in her heart. Having worked as a professional photographer, she was recently inspired to start writing more frequently as she battles with chronic illness. She also loves spending time with family, reading, drawing, and is passionate about children’s and teen’s ministry. She writes at Inheriting the Promises