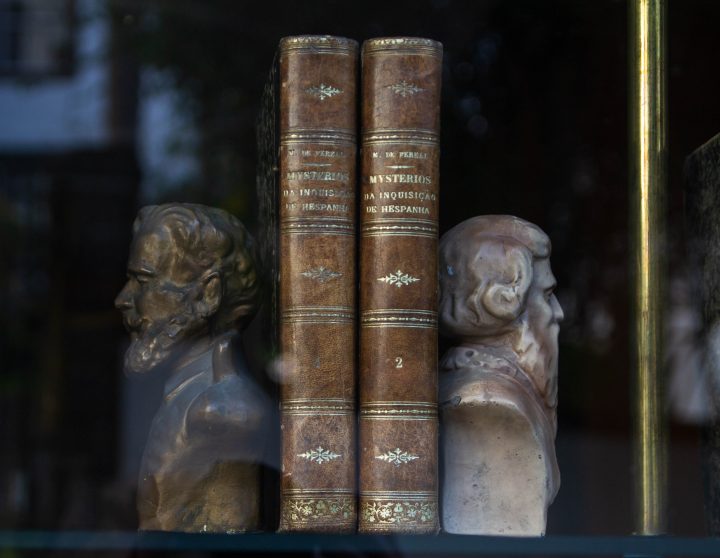 One day, wanting a fun, easy read, I pulled a P.G. Wodehouse book off the shelf. P.G. Wodehouse was a British author who wrote hilarious, clever books, and they always cheer me up when I’m having a rough time.

This particular book was titled Thank You, Jeeves, and was published in the 1930s. It followed two popular characters created by Wodehouse: Bertie Wooster, a rich British chap who’s always getting into scrapes, and Jeeves, his butler who’s always getting him out of scrapes. I’d read, and enjoyed, several Jeeves and Wooster books in the past.

But partway through Thank You, Jeeves, I ran into something that alarmed me: Racism. Bertie Wooster was using horrible racial slurs, and wearing blackface. Coming from such a beloved character, it was like a slap in the face. What was I supposed to make of it?

Reading books from a century ago can feel like stepping into a simpler, idyllic time. The books are often “cleaner” than modern books, making them feel “safe” to read. But unfortunately, life a century ago wasn’t simple and idyllic for everyone. It was common for people to have unkind, racist attitudes towards minorities.

So what should we do when racism shows up in our beloved old books? Should we judge people back then using the standards of today?

Do We Use the Same Standards?

That is a nuanced question that requires a nuanced answer. Sometimes meanings do change over time. Sometimes, when we look at the context, we’ll find that the character isn’t actually as racist as they initially seem. But at the same time, wrong is still wrong, no matter what era you live in. We need to be careful that we don’t start calling “wrong” “right” just because we enjoy the book.

The hardest thing for me to stomach in Thank You, Jeeves, was the fact that Bertie frequently used the N-word. When he did so, he always paired it with the word “minstrels.” Minstrel shows, which were common in that era, were comedic shows that featured black people as buffoonish and stupid. Some of the shows were performed by black people, but most were performed by white people in blackface, which is why blackface is considered racist today.

After googling around a bit, I discovered that in Wooster’s day, white minstrel performers in blackface were typically called by the slur, and black minstrel performers were called “colored,” as a way to differentiate the two types of shows. With this context, Bertie Wooster didn’t seem as racist as he had originally. He seemed to be using the word, not in a derogatory way, but rather to specifically denote what type of show was in his area.

Still, it was hard to read. Maybe Bertie Wooster didn’t think it was a hurtful thing to say, but would the black people of his day have felt the same way? I don’t know.

I was also upset that Wooster wore blackface in the story. Today, blackface is considered offensive because of how it was used in minstrel shows and other media to mock and laugh at black people. However, I noticed that in Thank You, Jeeves, Wooster never participated in the minstrel show. He only painted his face black to escape a sticky situation. Thus, it does not appear that Wooster was being offensive, even though such an action would be considered offensive today.

However, here’s something that’s very important to note: even though Bertie Wooster didn’t use his blackface to make a joke, the author, P.G. Wodehouse, painted the whole scenario as hilarious. When Wooster couldn’t get in the house because the maid had hysterics at the sight of him, it was supposed to be funny. When the police chased him off his own property because they thought he was black, we, as the reader, were supposed to find this humorous. Therefore, while Wooster as a character wasn’t being racist in the book, the author was. It was racist and wrong to make black people the butt of the joke in that way.

The final problematic thing in the book was the way the characters all treated Wooster so horribly when they thought he was black. This didn’t reflect badly on the character or the author so much as British society at large. It had seemed so idyllic and charming in other Wodehouse books, and it was disheartening to realize how cruel these people could be to someone with a different skin color.

Unfortunately, every culture and era has “blind spots.” These are areas of sin that don’t seem sinful to the people who live in that culture and era, even if it’s clearly spelled out in the Bible. For instance, if you read about the kings of Israel and Judah, you’ll see that over and over, even the good kings didn’t bother to tear down the high places where people went to worship idols. This was clearly wrong according to the Ten Commandments, but it was a cultural blind spot that didn’t seem so terrible at the time.

We, of course, also have blind spots. It’s important to critically think about people’s blind spots in the past so that we can learn to identify and avoid the blind spots of our present era.

Why We Should Think About It

Now, critically thinking through racism in old books is tough. How do we know if this stuff is worth getting worked up over? What if it doesn’t seem like that big of a deal?

It’s important to remember that we don’t get to decide whether or not something is hurtful to someone else. If a specific ethnic group or community tells us that a word or idea is hurtful, that’s for them to decide, and for us to respect.

Because of this, our own judgement isn’t always reliable. It’s a good idea to read book reviews written by black, native, or asian people. Even if they’re not reviewing the exact book that you just read, you’ll get a feel for how words and themes in old books affect them, and it will help you make judgements about your own books.

The most important thing is that we learn from the racism in old books. We can’t have a proper context for why racial issues today are the way that they are unless we understand how racial issues were in the past. We need to read and learn, even if it’s hard. Even if it means some of our favorite authors and characters did racist, problematic things.

Sometimes, if your favorite book has a little racism in it, you might still keep it. Since people aren’t perfect, sin issues of all types will crop up in books. At times we just need to “chew the meat and spit out the bones” as it were. Just make sure to warn people who want to borrow it, as you would with any other problematic content.

But sometimes you just need to pitch a book, and that’s what I ultimately did with Thank You, Jeeves. Even knowing the full context, it was hard to read all those racial slurs. Also, I didn’t like the fact that the humor of the book was based on laughing at black pain, and Wooster showed no growth or empathy after experiencing what it was like to be black.

Despite this, I still plan to read and enjoy other books by P.G. Wodehouse. It saddens me to know that Wodehouse, who seemed like such a wonderful author, wrote something so problematic. But because of the nature of our fallen world, sometimes we’ll find that good things were created by problematic people.

There aren’t any easy answers to this. You may choose to keep books I’d toss, and toss books I’d keep. But remember, this isn’t about “canceling” any old books or authors. Instead, this is about learning. It’s about calling sin sin, even if the character/author sinned unintentionally. But at the same time, it’s about extending grace. It’s about viewing things with nuance.