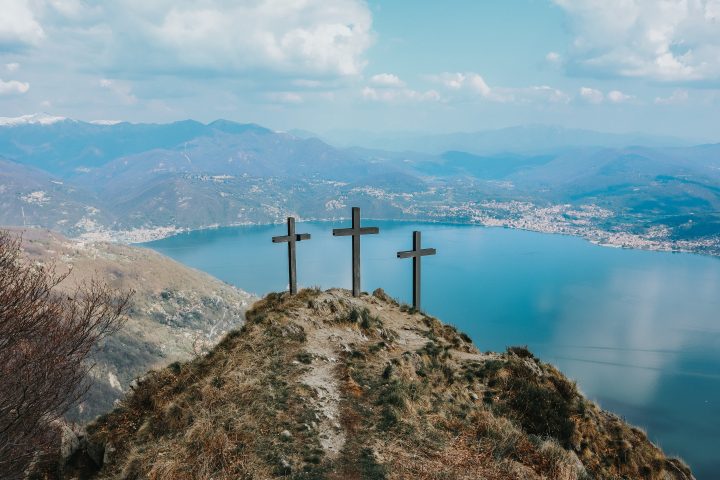 A group of Chinese rebels began to persecute Christians and foreigners. One day, they surrounded a mission station with nearly 100 students inside and blocked all the exits except one. Laying a cross flat on the ground outside that exit, they spread the word that anyone who trampled the cross would go free.

Slowly, terribly frightened, the first few students came out of the building and trampled the cross. As promised, they walked away free.

Then a girl came out. She knelt beside the cross and prayed for strength, then stood and carefully walked around it—toward the firing squad.

Encouraged and strengthened by her example, each of the other ninety-two students walked around the cross and were consequently killed.

I first heard this story during a recent sermon at church. As I listened closely, it made me think…what am I willing to give up for Christ? Am I willing to sacrifice my very life?

But now that I’m older, I can see more clearly the evil of the world and how much it despises Christians. We’ve already taken God out of schools, and we’ve seen multiple examples of the Ten Commandments being removed because people were “offended” by them. This world hates anything to do with God, and they’re trying to get rid of Him as much as they can! (See Psalm 2.)

We are the next generation, friends. We are those emerging into society, and we will either stand up for the truth of Christ or kneel in submission to the devil’s schemes.

We are the next generation, and we will either stand up for the truth of Christ or kneel in submission to the devil’s schemes. Click To Tweet

So, we have to ask ourselves… Is the cost of following Christ worth the sacrifice?

Ultimately, the question is this: Is He worth dying to our own wants, desires, and comforts in order that we might fully live for Him?

In Matthew 16:24-26, Jesus said, “If anyone would come after Me, let him deny himself [say no to himself] and take up his cross and follow Me. For whoever would save his life will lose it, but whoever loses his life for My sake will find it. For what will it profit a man if he gains the whole world and forfeits his soul?”

You Are Not Alone

When that girl walked out of the mission station, I’m sure she was scared! She had just seen people she knew trample the cross of her Lord and be set free by the Boxers.

Now she had a choice to make, and it was literally a choice of life or death. She had to ask herself, “Is Christ worth it?”

I’m sure her heart was pounding hard in her chest as she faced this decision. But do you remember what she did? She prayed. She prayed to her Lord—the very same Lord who had died on the cross she was being commanded to trample—for strength to walk around it and go to her death.

The Lord granted her strength, and she walked around that cross. Yes, she was killed for her audacity, but the shot that killed her ushered her straight to heaven, where she met her Lord Jesus face-to-face at last!

Whenever you are faced with the difficult decision to follow Christ—whether it’s life-threatening or not—pray for strength to make the right decision. You might be the only one standing up for what’s right, but remember that if you have been born again, you have God’s Holy Spirit living inside of you! You are never alone.

You might be the only one standing up for what’s right, but remember that if you have been born again, you have God’s Holy Spirit living inside of you! You are never alone. Click To Tweet

“For the Spirit God gave us does not make us timid, but gives us power, love and self-discipline.” (2 Timothy 1:7 NIV).

“Do you not know that you are God’s temple and that God’s Spirit dwells in you?” (1 Corinthians 3:16 ESV)

“In Him you also, when you heard the word of truth, the gospel of your salvation, and believed in Him, were sealed with the promised Holy Spirit, who is the guarantee of our inheritance until we acquire possession of it, to the praise of His glory.” (Ephesians 1:13-14).

Christ’s Sacrifice for Us

We just finished celebrating Christmas—the birth of our Savior, which would ultimately lead to His death on the cross. I’m sure we’ve all heard the story of Christ’s crucifixion, but do we really understand what He went through in order to save us?

In the first century A.D., the Romans were experts in torture and cruelty. They scourged Christ with whips that most likely contained metal and bone to rip and tear His flesh. They drove spikes through our Lord’s hands and feet, which pierced and shredded His nerves, causing unending pain to radiate through His arms and legs. On top of all this, He bore the weight of all our sin.

Jesus went through all that suffering for us. Isn’t that incredible? I am in awe of my Savior whenever I think of the sacrifice He made for me.

And He did it because He loves us so much. John 15:13 says, “Greater love has no one than this, that someone lay down his life for his friends.”

Is Christ Worth Everything to You?

Are we willing to lay down our lives for Christ, if God calls us to do so? Is Christ worth everything to us that we would be willing to sacrifice our very lives for Him?

Then start by living for Him today, using every moment for His glory.

As Elisabeth Elliot said, “There is nothing worth living for, unless it is worth dying for.”

“There is nothing worth living for, unless it is worth dying for.” - Elisabeth Elliot Click To Tweet