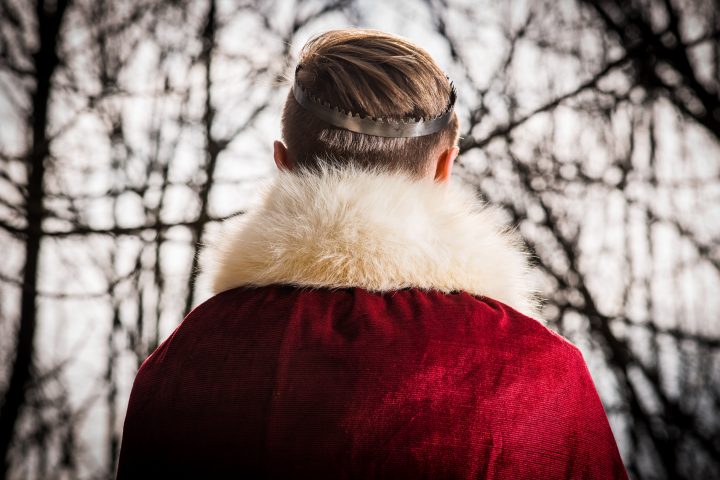 I remember spending countless hours in my backyard as a young boy, imagining myself as a brave knight conquering foes, rescuing damsels in distress, and saving the day. A stick I had carved with my pocketknife served as my sword and my gray sweatshirt with the hood pulled up was my armor. And while I’m sure it was a funny sight to behold — a nine-year-old swinging a stick wildly through the air — something important was taking place, deep in my young soul.

Right there, in my backyard, I was practicing seeing myself as a hero, doing courageous things, and living into a great story, the kind that God had designed me live out.

I’m grown up now, and the days of swinging sticks outside seem so far away. My life is filled with grown-up responsibilities, distractions, and activities that seem a far cry from the story I envisioned myself living out as a kid.

We live in a modern age, complete with social media, smart phones, and self-driving electric cars. We have almost everything we could want in this shiny new age — almost.

But there seems to be something missing, especially in the hearts of men.

While we technically have more than we could ever need or want, it seems there’s something that lies deep in the souls of men today that isn’t being fulfilled by the thrills and novelty of modernity.

One of the best ways to gauge the hearts and desires of a culture is to look at their art; the arts give us insight into every generation’s deepest-held desires and felt needs. And in the entertainment, movies, and video games of today, something interesting stands out — something that could speak to who and what we were created to be and to want.

In the past half of a decade, as the world has careened towards an age of technology, we see that one of the most popular, beloved, and obsessed-over genres for men has very little to do with smartphones and self-driving cars.

Instead, it’s filled with swords, quests, armor, and kings.

Books like The Chronicles of Narnia and The Lord of The Rings are some of the bestselling books of all time. TV shows like The Witcher, and Game of Thrones are some of the most watched TV shows ever. Video games like Warcraft, Skyrim, and the recent Elder Rings have captured the imaginations of tens of millions. And movies like The Lord of The Rings, Thor, and even Star Wars, which is a melding of modern and ancient fantasy elements (sabers of light, Jedi “knights”, temples), have become cultural staples inspiring religious-like followings.

While there are lots of opinions on each of these pieces of art and media (I’m not necessarily endorsing any of them), they each have something in common that can serve as evidence to the longings of men’s hearts. Aside from their striking absence of any of our modern wonders, all of them are filled with stories of heroes, in fantastic lands with ancient worlds that need saving. There’s nary a computer to be found, but around every corner lies adventure.

Some might say these books, movies, shows, and games are nothing more than frivolous stories, but I think if we look closer, we just might find that the driving force behind men’s obsession with epic stories of heroes taking place in far off lands or in the distant past is because of two reasons:

1. Men were designed by God to be heroes — to fight evil, stand for goodness, live with purpose, and rule over the domains He’s entrusted us with honor.

2. Men feel that it isn’t possible to live grand stories in the world we currently live in.

Men were designed by God to be heroes — to fight evil, stand for goodness, live with purpose, and rule over the domains He’s entrusted us with honor. Click To Tweet

So often today men are fed the message that they are toxic. And in many ways, we can be, but I wonder — perhaps if we believed it was possible to live out a grand story as heroes and kings, not on screens or pages, but right now, right here today, men would begin to walk away from the toxic traits modern culture has diagnosed us with and into a healthy, beautiful, and epic life.

The kind God designed, from the beginning of time, for us to live out.

It’s a hard age for us men right now, especially the ones seeking to be good men. Modern culture is filled with addictive sedatives like pornography, cheap sex, love of money, and obsession with fame, leaving us weak, defeated, distracted, and destructive — ultimately making living out a grand story feel like a “fantasy.”

But, what if there’s hope?

A Call to Accept Your Role as Royalty

In my book, The Way of Kings, I explore the ancient wisdom found in Scripture and how it can help us live lives of epic purpose today in our modern world.

The dragons we fight today in our current world might not look like scaly monsters, but instead come in the form of depression, addiction, laziness, trauma, and loneliness.

The rewards we find might not look like treasure or castles, but instead purpose-filled days, strong friendships, healthy marriages, and whole minds.

The dragons we fight today might instead come in the form of depression, addiction, laziness, trauma, and loneliness. The treasure or castles, may instead be purpose-filled days, strong friendships, healthy marriages, and whole minds. Click To Tweet

What are ways that right now, today, you can begin to accept the role of royalty and the character of Kingship in your life? How can you begin to see your life as one filled with purpose and calling, and act in the direction of ruling well the domain God has given you?

Perhaps it’s stepping out of your comfort zone and applying for that job or school that’s been on your heart. Maybe it’s striking up a conversation with someone that could be a lifelong friend or seeking out a mentor. It could look like making a reading list, getting a gym membership to better your health, or maybe it’s as simple as deciding to begin praying, speaking with your Creator again. Whatever it might be, I both challenge and exhort you to take that first step.

God created us to be heroes and kings, to live out great and epic stories — not in fantasy, but right here, right now, today. Will you join me?

is an TV and film actor, bestselling author, indie filmmaker, and a lover of stories. He is an armchair philosopher on the podcast The Overthinkers. Even though he had OCD, ODD, ADHD, and other learning disabilities, Nathan was able to turn his “disorders” into “superpowers.” He lives between the streets of New York City and the wilds of Colorado. You can find him on his website: nathanclarkson.me