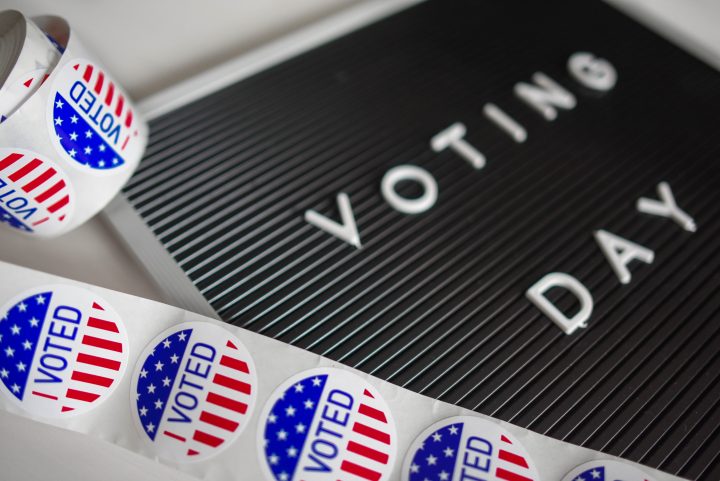 Today we vote. Today we “decide the fate of the Republic.” Today, those of us in America, exercise our “God-given rights” as a Democracy to decide who we will be: What laws we will follow and what leaders we want to guide those decisions.

I don’t know about you, but this season can be a little overwhelming.

Everyone’s emphasizing the importance of this election, even though we emphasize that every election cycle. Granted, this one may be especially important, but then who are we going to listen to?

Everyone on both sides of the aisle and in-between claim the fate of the republic may be at stake.

Democrats are afraid our country will continue following down the racist path toward xeno- and homo- phobia. Republicans are afraid we’ll devolve into a border-less chaos of lawlessness.

Obviously, I’m generalizing and minimizing each side’s concerns, but it reflects the shouting match going on in our country right now. And it’s even within the church.

There are Bible-believing, God-seeking, submitted believers on both sides of the conversations and everywhere in-between.

Some are deeply concerned about the the message and actions of President Trump and his brand of Republicans. For them, it has been a matter of deep thought and soulful wrestling. They feel the little good he may be doing does not justify the evil he has promoted and thus they must push against him and his constituency if they are to obey their conscience.

And some are caught in the middle, trying to figure it out, trying to take all sides into consideration and end up hated by everyone.

Amidst it all, many are pointing across the church aisle saying, “See, their support for [insert party or person] proves they’re not really ‘Bible-believing’ or ‘Jesus following.’”

I know many of you will be able to identify with the frustration, confusion, and potential fear that surrounds this season and I want to provide some clarity, hope, and maybe even some encouragement for any young Christian teens reading this now.

As Christians, I believe it is essential that we remember several things.

1. We are going to be okay, not because “the Republic” is secure, but because the Kingdom of God is.

I don’t offer this as permission for Christians to throw up their hands and run away from hard problems. We must give our sweat, blood, and tears to fighting for truth and justice. (If you keep reading, you’ll see passivity is not my approach at all.)

But I say this first because it is essential we remember where our allegiance lies. As children of God, we have been transferred from the kingdom of darkness to the kingdom of light. We are citizens of the Kingdom of God and that kingdom is secure.

The Bible calls those who follow God in faith “strangers and exiles” on earth (Hebrews 11:13; 1 Peter 2:11). In other words, we won’t fit well into any political or cultural system.

This is going to be incredibly threatening to the political and cultural systems we enter and they will hate us and “kick us out.” Thus, we have to have a clear understanding of which kingdom we are identified with: America’s? The Democrat’s? The Republican’s? Or Christ’s?

Which leads me to the next thought…

2. Christianity is intrinsically a political system.

All throughout the New Testament, Jesus and the Apostles use political terms to describe the Church.

Jesus started it by calling himself King and it got him crucified by the Romans. He was also the Messiah, a very political term to any first century Jew or Roman. Furthermore, not only is he a king and a messiah, but he’s the King and Messiah. Jesus Christ is preeminent above all thrones, dominions, rulers, or authorities, visible or invisible, spiritual or earthly (Colossians 1:15-20).

Jesus is king, which means he has a nation made up of citizens and even a military. Paul refers to us as “citizens of heaven” (Philippians 3:20-21). And several times–though merely metaphor–Paul uses military terms such as “soldier” to describe the Christian walk, showing he’s not afraid to equate the Christian walk with the gravity of earthly warfare. Not only are we citizens and soldiers, but we’re also God’s ambassadors (2 Corinthians 5:20).

All this to say, Christianity isn’t merely something we identify with spiritually and then keep out of the rest of our lives.

No, it’s a political alternative to the physical kingdoms we set up on earth. It’s not a “I’m a Christian first and an American second.”

Rather, it’s an allegiance with Jesus that puts me at odds with any philosophy, party, or law set up against Christ. We really are exiles wandering about in a land we don’t quite belong in, waiting for the return of our King.

Therefore, there is no Democrat or Republican, American or Mexican Christian. There is only the Christian–the little Christ follower. The one following the King who was crucified for treason.

Christianity is an allegiance with Jesus that puts me at odds with any philosophy, party, or law set up against Christ. We really are exiles wandering about in a land we don’t quite belong in, waiting for the return of our King. Click To Tweet

3. We are called to seek first the kingdom of God.

This “seek first the kingdom of God” phrase comes from Matthew 6, which I think is worth reading if you have the time.

In it, Jesus is talking about being anxious over clothing or food. In essence, he’s saying, “Don’t worry about your security tomorrow. Seek first the kingdom of God and all these things will be taken care of.”

So what does it mean to seek first the kingdom of God?

Whole books could be written on this verse alone, but I think one clue comes from the prayer Jesus taught his disciples. He told them to pray “Your kingdom come, your will be done, on earth as it is in heaven.”

As Christians, we are to seek and do God’s will on earth as it is in Heaven.

When it comes to politics, we should not ask ourselves “What is best for America?” but “What is God’s will?” And then we should do exactly that, whether or not it puts us at odds with culture, political parties, or our government.

When it comes to politics, we should not ask ourselves “What is best for America?” but “What is God’s will?” And then we should do exactly that, whether or not it puts us at odds with culture, political parties, or our government. Click To Tweet

4. There is no virtue in rebellion.

What I am not saying, in suggesting that being a Christian puts us at odds with earthly governments or that Jesus “died for treason,” is that rebelling against the state is somehow virtuous.

It’s not. In fact, the Bible has very strong words against rebellion. It’s not something I want to be a part of at all.

Following Jesus is virtuous. If following King Jesus puts us at odds with the government, then we follow Jesus. But we should never dress up rebellion and our own proclivity for lawlessness as righteous by saying “Well, Jesus died for treason.”

Jesus is not only King over Caesar, but he’s also the Prince of Peace. That doesn’t mean he just gives us a peaceful night of rest or a happy Christmas or that he never ruffles feathers. No, the title “Prince of Peace” is an indicator of how he actually governs his kingdom.

He governs through peace, not violence; through love, not hate; through humility, not pride; through calmness, not chaos.

The blood Jesus shed to set up his kingdom was his own blood, not that of his enemies and he calls us to do the same.

The blood Jesus shed to set up his kingdom was his own blood, not that of his enemies and he calls us to do the same. Click To Tweet

The warfare Jesus calls us to fight is not a war of Democrats versus Republicans or Americans versus Muslims “but against principalities, against powers, against the rulers of the darkness of this age, against spiritual hosts of wickedness in the heavenly places” (Ephesians 6:12).

And our weapons are not swords and guns or votes and protests, “but [of] divine power to destroy strongholds” (2 Corinthians 10:3-6).

Here’s how Paul put it “We destroy arguments and every lofty opinion raised against the knowledge of God, and take every thought captive to obey Christ, being ready to punish every disobedience, when your obedience is complete” (verses 5-6, emphasis mine).

So, yes, Christ’s kingdom is intrinsically political but it isn’t set up and maintained the same way the kingdoms of this earth are.

It might surprise you, but this is an incredibly hopeful and comforting statement for me. It reminds me my hope and security do not lie in an earthly kingdom which could fall at any given moment. Rather, my hope is in the King who shed his own blood for the saving of many to make a new race and set up a new kingdom.

Although, I love America and want to see it succeed in much the same way I want to see Bolivia or Thailand (two places I’ve spent time in) succeed, I do not see it as a “shining city on a hill” that must be defended and protected (or torn down) at all costs.

Because that specific description was meant for someone else…

You are the shining city on a hill (Matthew 5:14-16). The kingdom of God is a kingdom of hearts, not borders or ethnicities or political ideologies.

God, in his sovereignty, does not technically need any of us. But I absolutely believe he’s chosen to use us as his ambassadors for bringing the Kingdom of God to the hearts of men. If we give up or run away or hold anything back, the specific part of his will we are made to do won’t get done.

In the same way that it’s comforting to know God’s will is not dependent on the success of America, it’s a bit chastising to remember it is, a little bit, dependent on me.

God said his will is for his people to “…seek justice, love mercy, and walk humbly…” (Micah 6:8). He created us to do good works (Ephesians 2:10). And the evidence of his work in our lives is whether or not we have love, joy, peace, patience, kindness, goodness, faithfulness, gentleness, and self-control (Galatians 5:22-23).

In other words, do God’s will at all times. Use politics only when necessary.

What a travesty if we go to vote in the polls or protest with our picket signs or gather signatures for our petitions all in the name of doing the will of God, but we fail to bring the kingdom of God to our own hearts and those of our neighbors?

So today, I encourage you to follow Christ’s example and instead of praying “Help so-and-so win at the polls and get into office” pray “Thy kingdom come, thy will be done on earth [and in America] as it is in heaven.”

And then go: Be the hands and feet of Jesus and bring the Kingdom of God to your family, friends, and neighbors.