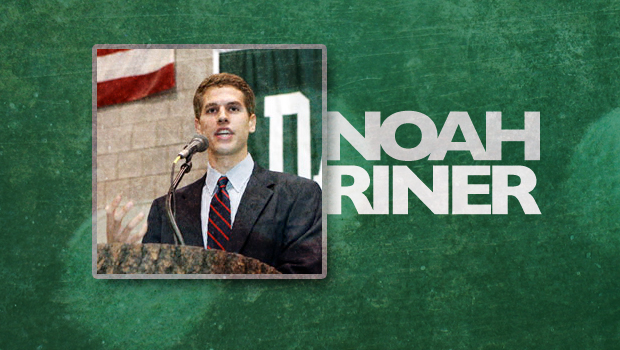 Noah Riner, 21 — homeschooled son of a Baptist preacher, and now student body president at Dartmouth College — sparked national controversy with his September 20th convocation speech to incoming freshmen. In what is traditionally an immemorable speech, Riner maintained that character, not just intelligence and talent, must be the goal for true education.

Dartmouth, Riner told his peers, has turned out a lot of very talented, very intelligent individuals. “But if all we get from this place is knowledge, we’ve missed something,” he reasoned — citing examples, both historic and recent, of Dartmouth alums whose credentials were impeccable, but whose character was proven to be greatly corrupt. Turning to raise the issue of New Orleans — the looting, violence, and rape in the aftermath of Hurricane Katrina — Riner clarified, “My purpose… isn’t to condemn just [the citizens of New Orleans], rather it’s to condemn all of us.”

“The real problem in this world,” Riner argued, “is not lack of education [but] lack of character.”

“[C]haracter,” he held, “is what you do when no one is looking, but I’m afraid to say all the things I’ve done when no one was looking.” He challenged his fellow students to be honest with themselves and with one another. “We have the same flaws as the individuals who pillaged New Orleans,” he said, affirming the truth of the universal sin nature. “Ours haven’t been given such free range, but they exist and are part of us all the same.”

However, it is still very likely that — had Riner stopped at this point — there would have been little uproar. Vice president of the Student Assembly, Kaelin Goulet, would not have resigned in protest, calling Riner’s speech “reprehensible and an abuse of power.” The story would not have swept across the blogosphere like wildfire, nor been featured in magazines and newspapers across the country.

“Jesus’ message of redemption is simple,” Riner said. “People are imperfect, and there are consequences for our actions. He gave His life for our sin so that we wouldn’t have to bear the penalty of the law; so we could see love. The problem is me; the solution is God’s love: Jesus on the cross, for us.”

“You want the best undergraduate education in the world, and you’ve come to the right place to get that. But there’s more to college than achievement. With Martin Luther King, we must dream of a nation – and a college – where people are not judged by the superficial, ‘but by the content of their character.'”

WORLD magazine summarizes the fallout of Riner’s speech in this week’s issue:

Editorials, guest columns, and letters to the editor filled the pages of the Dartmouth student newspaper. Senior Brian Martin wrote that he was “appalled and disappointed,” adding that “Jesus would not have wanted to make new students feel unwelcome.”

An editorial cartoon depicted Mr. Riner as an overzealous fanatic out to vanquish infidels, with Jesus as a foul-mouthed, pot-smoking hippie advising him to chill out.

Others wrote passionately in Mr. Riner’s defense: “He stood up against political correctness, and it is about time,” opined senior Stacey Kourlis: “No one has been hurt or denied their rights. If anything, Riner has just created the chance for everyone to argue about a controversial topic.” Freshman Brian Chao suggested that “had Riner instead espoused the virtues of Muhammad, Buddha, or any other religious figure, he would be applauded.”

That people disagreed with his ideas did not surprise the senior, a history and government double major, but the frequent unwillingness to engage those ideas surprised and disappointed him. “I wish people would wrestle more with the issues raised in my speech rather than with the propriety of the speech,” he told WORLD, insisting he had not intended to generate a discussion of free-speech rights. “As a Christian, I can’t talk about character without talking about Jesus.”

As would be expected, Riner’s inbox was flooded with emails in the days following his speech. In a gesture that impressed me even more than his speech itself, Riner not only read each message carefully — many of which viciously attacked him and his beliefs — but also took the time to personally meet with each detractor.

Mr. Riner, The Rebelution applauds you. Your message of character — character that cannot be divorced from Christ — is one that our culture desperately needs. May God bless and strengthen you as you stand for truth — truth towards which the world is hostile.