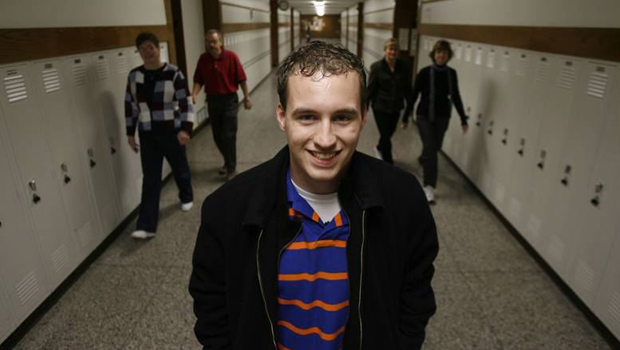 Two weeks ago The Rebelution covered the impressive “rise of Michael Sessions” into the national spotlight following his apparent victory in the Hillsdale, MI mayor’s race. However, we updated that post with the news that Michael’s victory was pending a recount.

Today we would ask all of you to join The Rebelution as we congratulate 18-year-old Michael Sessions on his successful and official election as mayor of Hillsdale.

Two months ago, Michael was not old enough to vote. But on Monday night, in a City Council chamber packed with reporters from as far away as Japan and Russia, he was sworn in as mayor of Hillsdale.

In his only speech of the night, Michael thanked his family and friends. “I’m honored to have the opportunity to serve as mayor of Hillsdale. I am prepared to serve for each and every one of you,” he said.

“I wish Mayor-elect Sessions good luck and much success and offer my support in every way that I can,” Mr. Ingles said.

Michael who turned 18 in September, was too young to get his name on the ballot, and had to run for mayor as a write-in candidate — meaning voters had to remember his name and add it to the ballot by hand in order to support him. Young Mr. Sessions launched his campaign, just one month before the election, with the $700 he made from his summer job. That’s only slightly less than the $67 million Mayor Bloomberg spent to be reelected in New York City.

Michael Owes Everything To His Parents:

And we don’t even mean that in the traditional, “raised-me, fed-me, bore-me,” sense. Rather we’re referring to a very interesting point Keith Olbermann, Anchor for MSNBC’s “Countdown,” brought up in a November 10th interview:

OLBERMANN: So, now, obviously, 670 is a lot of people in a town of 8,200. But do you think of those two votes that put you over the top as the ones your mother and father cast for you?

SESSIONS: Most definitely. It had to have been.

There you have it. Anyone want to argue that point?

Michael isn’t the only young adult who deserves The Rebelution’s attention. On the night of the swearing-in ceremony, Brandon Thomas, the mayor’s 17-year-old campaign manager, demonstrated a knack for good politics as he explained a downtown clean-up campaign he and Michael organized on Sunday.

“His appearance on Letterman and everyplace else reinforced the stereotype that he’s just in high school and not taking this seriously. [Mike] wants the people of Hillsdale to know that he is taking it seriously. He’s going to bring more energy to the city,” Brandon said.

Michael had appeared on the “Late Show with David Letterman” to read the Top Ten list titled “Good Things About Being an 18-year-old Mayor.”

Another young adult involved was Meghan Scholl, 17, who helped Michael hand out signs and write campaign speeches. It has become evident that Michael’s campaign, as witnessed by these few examples, was largely driven by young people and that its message is clearly for young people.

“My parents thought he was joking around,” Meghan said, “We didn’t think he would win, but then he started talking and he really knows what he’s talking about.”

Meghan explained to reporters that Michael began studying how similar communities pay for economic development and funding models for fire and police departments when he started campaigning.

Steven Brower, a government and economics teacher at Hillsdale High School, shared that “there are too many kids today who laugh at government,” but said Michael, by carefully researching issues before taking a position, will serve responsibly in his four-year post.

“He was a real go-getter during his campaign,” said Mr. Brower, “he acted like he was running for president.”

At one point, five days before election day, Michael spent so long out on the streets knocking on the doors, ignoring his mother’s pleas for him to wear a coat, that he ended up in a hospital emergency room with bronchitis but, by then, his momentum had become unstoppable.

Some of Michael’s friends said he began talking about running for mayor a few years ago.

Jeff Maxfield, a Hillsdale High School classmate who helped him campaign for mayor, said he remembers that Sessions wanted to become mayor before he could drive.

“When he was sophomore, he said that he could run for mayor when he was a senior,” said Jeff, one of many supporters in the audience at Monday night’s council meeting. Jeff wore a campaign T-shirt that said “Need Experience? Get Some … Get Involved” on the back.

“Age has nothing to do with ability,” said Valerie G. Van Opynen, a 49-year-old artist. “He’s done more good for this city in his first 15 minutes than the (last) administration ever did. This is the most excited I’ve seen this town in the five years I’ve been here.”

“Age has nothing to do with ability.”

Thank you, Mr. Sessions, for making that powerful point.

A Message From The Rebelution:

The Rebelution is extremely excited for you for many reasons. But primarily because you are one more example of how our culture doesn’t quite know what to do with young people who take initiative and “Do Hard Things.”

The media blitz that you’ve faced has granted us small glimpses into the mind of a young man who wasn’t about to run a half-hearted or half-way campaign. And we are sure that your faithfulness in smaller areas prepared you for the larger task as Hillsdale’s new mayor.

We applaud you Mr. Sessions, but we would also like to offer you the following counsel:

Disclaimer: The Rebelution applauds Michael Sessions for his competence and character, as evidenced by his initiative and drive during his campaign. However, at this time, our readers must understand that — to our knowledge — Michael has made no reference to God, in gratitude or otherwise, and his political leanings are largely unknown. Because of that we encourage our readers to use discretion by only admiring, as we do, the positive, known characteristics of Michael Sessions. Please keep him in your prayers.