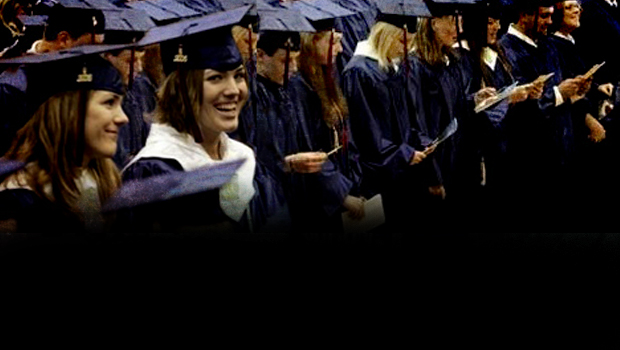 For some reason Alex and I have a certain penchant for stories about twins doing hard things — so we were very excited this past week when we heard the story of Megan and Mandy Chapman, twin sisters from Russel County, Kentucky. They provide a wonderful example of what it looks like to “take a stand” for Christ.

A Federal Lawsuit Filed by the ACLU

Megan and Mandy were graduating high school on Friday. Megan had been selected to conduct a prayer during the ceremony. Friday morning a federal judge issued an order barring Russell County High School and Megan (she was cited in the order by name) from conducting prayer during commencement.

With graduation just around the corner and her entire life ahead of her, Megan faced a difficult choice. Can you imagine how it would feel to read your name in a federal lawsuit filed by the ACLU? As Megan wrestled with her decision, Mandy began to formulate a plan of her own.

Liberty Counsel and The Lord’s Prayer

At 4:00 PM, only three hours before the graduation ceremony, Megan received a phone call from Liberty Counsel, an organization devoted to protecting religious freedom.

Liberty Counsel founder and chairman, Mat Staver, told Megan they’d be behind her every step of the way and counseled her that God can turn apparent adversity into great opportunity when we’re willing to trust and obey Him.

Only a few hours later more than 3,000 people packed into the Russell County High gymnasium to watch 200 seniors graduate. As the principal finished his opening remarks the senior class suddenly stood as one body and began to recite The Lord’s Prayer!

Before they could finish the audience erupted into thunderous applause. Some students were too overcome with emotion to finish. But the statement had been made. They would not bow down to the ACLU.

A Secular Poem or Her Testimony?

Then, Megan came to the podium prepared to deliver a secular poem, The Road Less Traveled. But when she looked out at the large audience, and at the hundreds of seniors who had just completed The Lord’s Prayer, she asked God to give her a message. You did not put me here to recite a poem, Lord.

Putting aside what she prepared, Megan spoke from her heart. She shared how God had led her since she was a child. She spoke of the peace that comes from giving your life to Jesus. And she wished her classmates the same peace through a relationship with Jesus Christ.

Again and again the speech was interrupted with applause and punctuated by several standing ovations.The Louisville Courier-Journal reporter covering the event described the evening as having a “revival-like atmosphere,” to the complete dismay of the ACLU! In trying to silence a prayer they had sparked a revival!

The following morning, Megan received a call from Fox News, and that night shared the story of her personal salvation through Jesus Christ — with millions of viewers!

That same afternoon, Mat Staver spoke with Dr. Jerry Falwell, Founder and then Chancellor of Liberty University, and was authorized to offer Megan full scholarship to join the 2006 freshman class. Upon hearing the good news, Megan was overcome with tearful amazement.

“Are you kidding?” she asked. “I’ve been praying for several years to be able to attend Liberty University, but I simply could not afford it.” But to Mr. Staver’s bewilderment, Megan did not immediately accept the offer. He was puzzled.

Mr. Staver called her a few days later and voice that sounded just like Megan answered the phone. “Megan?” he asked.

“No, this is Mandy, her twin sister,” the voice replied.

Mandy, he found out, was the one who orchestrated the recitation of The Lord’s Prayer — distributing bookmarks with a copy of the prayer on it in case anyone forgot the words (see the bookmarks in this post’s header).

Dr. Falwell paused briefly, and offered Mandy a full scholarship as well! The twin sisters, who had been planning to attend University of the Cumberlands together, now had an open door to their first choice — Liberty University!

From Liberty Counsel’s May 2008 Newsletter

“Almost two years later, Megan and Mandy have completed their sophomore year. Since arriving at Liberty, Megan has been volunteering in the Liberty Counsel office. She now wants to enter law school and eventually work with Liberty Counsel defending our religious freedoms against the ACLU bullies!

But there’s even more to the story. When CNN Headline News called wanting to feature Liberty Counsel in their series “God’s Warriors,” we introduced CNN correspondent Christiane Amenpour to the twins. The story of Megan and Mandy and their faith has now been shown several times around the world in the two hour documentary called “God’s Christian Warriors.” Megan and Mandy have received emails and notes of appreciation from all over the world!

God loves irony. Megan had a choice — buckle to the pressure of the ACLU or stand up for Christ. Had she buckled, her graduation would have been silent and her life would have taken a different direction. But she stood for Christ, and her witness was heard around the world. She is now at Liberty University and may soon go head-to-head in court with the ACLU as a practicing attorney. She did the right thing, and God honored her.”

Of course, taking a stand for Christ doesn’t always involved the ACLU — and it doesn’t often result in CNN documentaries, and full scholarships to your favorite college. The audience won’t always give you a standing ovation.

So what can we learn from Megan and Mandy? Well, I see a God who is in complete control. He brought Megan and Mandy an unwelcome test (via the ACLU), rewarded their obedience almost immediately (via Liberty University), and gave them a platform to spread the Gospel (via Fox News and CNN).

We can look at that story and say, “Wow, God is amazing! We obey Him and He gives us scholarships and fame!” But what if Megan had been booed? What if the ACLU had won? What if Megan and Mandy were made “media-martyrs” for standing up for Christ? Would God be less amazing?

I love stories like Megan and Mandy’s because I can see what God was up to. And at those times when it’s not so easy to see, I can say, “God, I know that you are in complete control. And even though I don’t understand what you are doing, I trust you, because I’ve seen you work before.”

I hope that Megan and Mandy’s story will inspire you to take radical stands for Christ, trusting firmly in God’s goodness, whatever the outcome might be. My prayer is that our generation would count the cost and stand anyway. That we would be able to stand firm and say with Shadrach, Meshach, and Abednego:

“If we are thrown into the blazing furnace, the God we serve is able to save us from it, and He will rescue us from your hand, O king. But even if He does not, we want you to know, O king, that we will not serve your gods or worship the image of gold you have set up.” (Daniel 3:17-18)