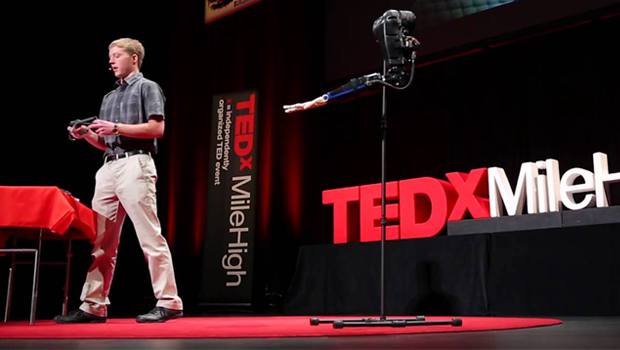 3D printing is revolutionizing a number of industries, but more than that it’s changing the way people think about inventing. Since he was 14, Easton LaChappelle has been interested in robotics. Back in 2010 Easton created a robotic hand from LEGO, fishing line and a few servos. This early model won the teen 3rd prize at the Colorado Science Fair, but more importantly, while at the fair LaChappelle met a little girl that was born without an arm. During the conversation LaChappelle learned that the girl’s prosthetic cost $80,000, and he knew right then he could build his own arm for much less.

While creating the second iteration of his prosthetic, LaChappelle became acquainted with 3D printing, and his idea took off. His original prosthetic, which was only a hand, quickly turned into a fully articulated arm. Borrowing open source components from across the internet, LaChappele cobbled together a sophisticated prosthetic that evolved into his third-gen model, the “Arduino Robotic Arm”.

Easton’s newest prosthetic arm is a marvel. Powered by an arduino chip, the robotic prosthetic cosst around $250 and has the same functionality as a human arm. When connected to a brainwave headset, a wearer can focus on an object and have accurate control over their 3D printed hand.

Because of his ingenuity, LaChappelle has earned himself an internship with NASA. In the video above you can listen to LaChappelle describe his invention and how 3D printing aided his design process.