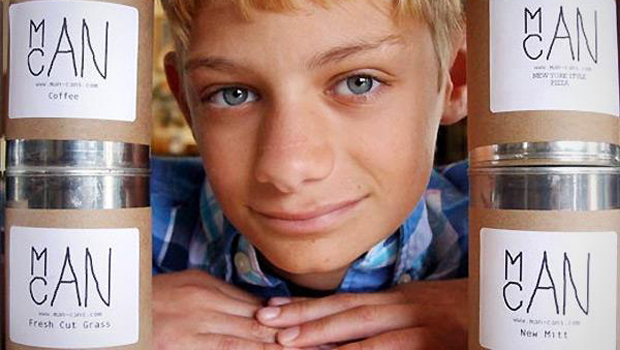 (Brass Magazine) — The American Dream–the success of the everyman — is getting knocked around a bit lately. But it can’t be counted out if high school kid from an industrial slash farming town in central Ohio needs to rent warehouse space to contain his rapidly expanding manscented candle business.

ManCans’ headquarters is 1,000 square feet of concrete-floored, no-frills workspace sharing walls with two automotive shops in a nondescript business park on the outskirts of Marysville, Ohio. Hart Main — the 15-year-old founder — is sitting at a desk in one corner. You could call it his office, but that would imply it had walls. He’s working on details of a new website order while checking the latest sports headlines.

Sandy Dejarnette, one of Hart’s part-time employees, is labeling freshly made candles while listening to top-40 country radio. The refrains of Carrie Underwood, Blake Shelton, Taylor Swift and Jason Aldean are periodically punctuated by the “pFFDDTT, pFFDDTT, yeeeeen, yeeeen” of pneumatic tools next door. Hart’s father Craig (Man-Cans part-time chief operating officer, when he’s not working his other job as an IT director) is cleaning a pallet of old soup cans, one at a time.

This is the salt-of-the-earth, small-town, bootstrap, small business you always hear the politicians waxing poetic about in their stump speeches.

Outside in America’s heartland, it’s corn fields, leafy trees, and river bottoms for as far as the eye can see in Ohio’s humid air. It smells like earth. Rich, dark loam first laid down by ancient glacial melt and replenished by sediment from Big Darby Creek, the Scioto River, and numerous other tributaries flowing south to the Ohio River, which Thomas Jefferson once described as “the most beautiful river on earth.”

Dirt. Hart first unveiled the scent on the now-off-air TBS late-night show Lopez Tonight in June 2011, seven months after starting the business. “Our dirt scent’s a very strong smell — like fresh topsoil,” Hart says. It’s not his favorite scent (that distinction belongs to Fresh Cut Grass), but it sums up his business idea perfectly: “We figured, what’s more outdoorsy and manly than dirt?”

Two years ago, Hart’s sister Camryn wanted to sell candles for a school fundraiser. Like a good older brother, he busted her chops for not selling any candles with scents that men (like him) would like. It might have been nothing more than sibling banter, but Hart’s parents overheard. “My parents kind of encouraged me, saying that you should try this, that is not a bad idea that you had,” Hart says. “I didn’t take it seriously because I was just trying to be funny and sarcastic.”

Word got around though, and other family friends told Hart he’d opened mouth and inserted good idea. So he decided to give it a whirl.

There’s the perception that starting a business is something that only the select few who’ve been nerding out writing business plans since they were in elementary school, joining startup networking groups, and reading autobiographies of famous entrepreneurs can do. Turns out, it’s not always that complicated.