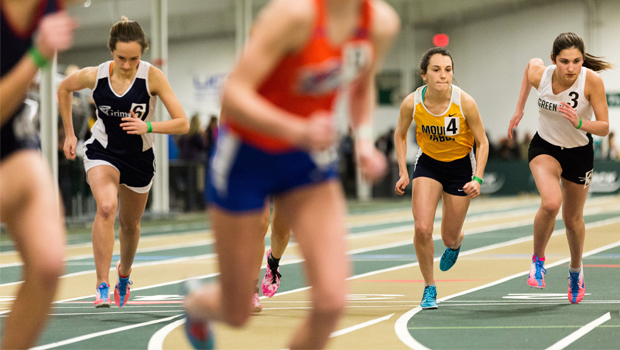 (New York Times) — When a pack of whip-thin girls zipped across the finish of the 1,600-meter race at a recent track meet here, the smallest runner’s legs wobbled like rubber, and she flopped into her waiting coach’s arms. She collapses every time she races.

Kayla Montgomery, 18, was found to have multiple sclerosis three years ago. Defying most logic, she has gone on to become one of the fastest young distance runners in the country — one who cannot stay on her feet after crossing the finish line.

Because M.S. blocks nerve signals from Montgomery’s legs to her brain, particularly as her body temperature increases, she can move at steady speeds that cause other runners pain she cannot sense, creating the peculiar circumstance in which the symptoms of a disease might confer an athletic advantage.

But intense exercise can also trigger weakness and instability; as Montgomery goes numb in races, she can continue moving forward as if on autopilot, but any disruption, like stopping, makes her lose control.

“When I finish, it feels like there’s nothing underneath me,” Montgomery said. “I start out feeling normal and then my legs gradually go numb. I’ve trained myself to think about other things while I race, to get through. But when I break the motion, I can’t control them and I fall.”

At the finish of every race, she staggers and crumples. Before momentum sends her flying to the ground, her coach braces to catch her, carrying her aside as her competitors finish and her parents swoop in to ice her legs. Minutes later, sensation returns and she rises, ready for another chance at forestalling a disease that one day may force her to trade the track for a wheelchair. M.S. has no cure.

Last month, Montgomery, a senior at Mount Tabor High School, won the North Carolina state title in the 3,200 meters. Her time of 10 minutes 43 seconds ranks her 21st in the country. Her next major competition is the 5,000 meters at the national indoor track championships in New York on March 14, when she hopes to break 17 minutes.

Her trajectory as a distance runner has been unusually ascendant.

“When she was diagnosed, she said to me, ‘Coach, I don’t know how much time I have left, so I want to run fast — don’t hold back,’ ” said Patrick Cromwell, Montgomery’s coach. “That’s when I said, ‘Wow, who are you?’”

Photos courtesy of Jeremy M. Lange for The New York Times and Lauren Carroll for The Winston-Salem Journal.