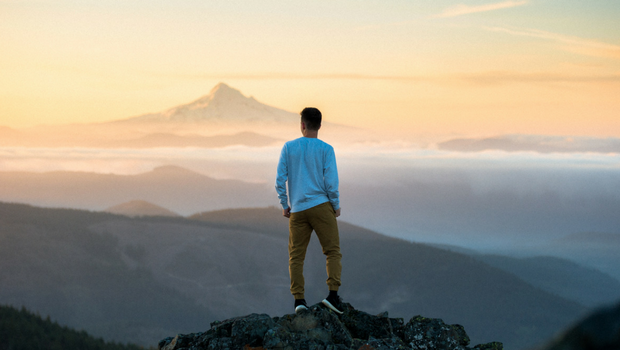 On February 6th, 1943, the students of Amsterdam were forced to make a life-altering decision: sign a declaration of loyalty to the Nazi regime, or be subjected to forced labor for the glory and advancement of the Third Reich.

Hans Poley—teenager, student, Rebelutionary—was one of the few to stand strong.

Those were his words. This is his story.

December 1942 marked the beginning of his journey. Previously exempt from conscription due to his age, the now eighteen-year-old Hans was in danger of being forced to fight for the Reich. With the Gestapo continually harassing students, he stayed on the move, going from place to place in an attempt at evasion. Then, the fatal announcement, a forced choice of loyalties. Hans said,

“The battle against national socialism was not just a battle with arms; it was ideological, a religious battle, and I could not sign the declaration.”

By May 1943, Hans Poley was an outlaw. His refusal to declare his loyalties caused the threat of Nazi arrest to hover over him, and his parents.

For over a year he went into hiding, staying with the now-famous ten Boom family in their little watch shop on the BeJe.

Unable to leave the shelter and relative safety of the BeJe, the weeks and months crawled by. He passed some time by typing resistance literature for the underground pamphlet network. He remembers, “More and more underground newsletters and bulletins served as duty calls to those who too long had complied with — even accommodated — Nazi oppression. Each carbon copy meant one more appeal to resist the enemy. ‘Multiply and pass on’ was the password.”

But soon, Hans felt the pull of resistance work even more keenly. The lack of justice toward God’s chosen people affected him strongly, and he knew God was calling him to take a more active stand, though doing so could cost him his life.

After underground workers obtained him a certificate of exemption, and a new identity card, forging a different birth year and declaring him a Dutch assistant minister, he was finally free to walk the streets without danger of arrest.

Hans quickly began whatever resistance work he could. Delivering messages, warning others of expected Gestapo raids, logging the activities of feared Gestapo agents, delivering smuggled ration cards to desperate families in hiding… each act pulled him deeper into danger and risk of discovery, but he trusted that, as Corrie ten Boom often reminded him, “God’s angels surrounded them.”

One cold February morning, after an underground mission, Hans was discovered and arrested. The Gestapo took him to the Haarlem police station for harsh interrogation. He later described this as,

“The darkest hours of my life… I had come to the end of my possibilities. The shadow of death fell over me. Everything that had been my life was fading before my eyes and heart: my love, my family, my future. Only one unshakable certainty remained: the promise of my Father in Heaven that even in the valley of the shadow of death, He would be with me.”

After weeks of prison, he was transferred to the Amersfoort concentration camp, where he spent six months suffering greatly for being obedient to God’s call. He was released on August 16, 1944, and again went into hiding, until the occupying German army in Holland unconditionally surrendered.

Was all the pain and hardship worth it to follow the call of obedience? To Hans, yes. He said afterward that, “The continuing presence of my Father in Heaven sustained me. That inner peace made me invulnerable to the constant abuse by the forces of evil.”

Hans’s story is incredible. It challenged and convicted me, inspired and stirred my heart to radical faith. These few paragraphs aren’t enough to contain his extraordinary testimony. He embodied, in my opinion, the very definition of the word, “Rebelutionary.”

But one question burns bright in my heart.

We may never rebel against an evil and oppressive government, join a resistance movement, save hundreds of lives, or serve time in a concentration camp for taking a stand for justice. (Though to be honest, our future is always uncertain.) Even so, we do have opportunities.

We are the voice of the future. Within our generation live future national, state, and local leaders. The next pastors, missionaries, and evangelists. Upcoming writers and speakers, doctors, lawyers, teachers.

And not only are we future leaders. We are present ones as well. Even if you don’t realize it, you are a leader.

We each have a sphere of influence. Great or small, you help contribute to what your tiny part of the world looks like.

For Hans, and ultimately for us as well, it comes down to these questions.

Are we living like our lives matter? Are we making the most of the time, energy, and influence that God has given us? And the most important question of all: are we willing to pay whatever price to follow Jesus?

If we, the students, would answer these questions, and dare to live boldly and sold out for Christ, it would transform the “will” of our homes, schools, communities, and yes, nation.

I desire to live as Hans did. To, in whatever circumstance, follow Christ wholeheartedly. It’s a life of boldness, risk, reliance in the One who holds our future. But the rewards far surpass any cost. As Eusi, one of Hans’s dearest friends, wrote, “The righteous of the nations will be part of the world to come.”

Indeed. May it be said of us.