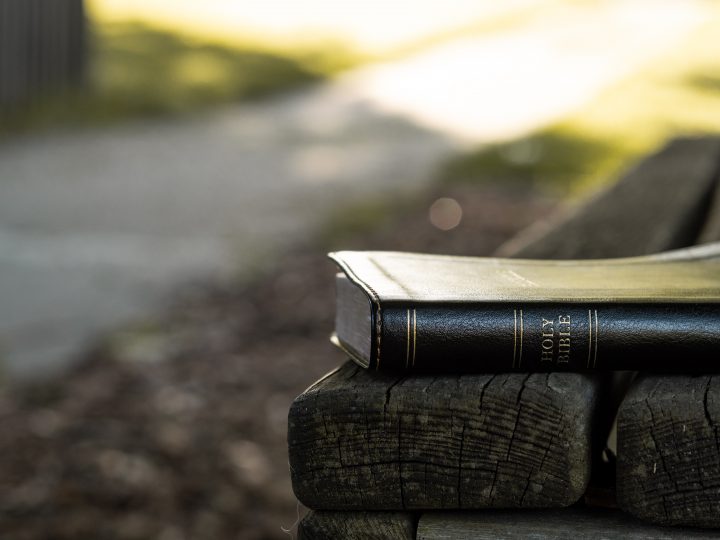 “This book is illegal in 53 countries.”

That line is printed in bold letters across the front of my Bible case. I’m reminded of it every morning when I read my Bible. Reminded of the fact that I have three complete Bibles and a bilingual New Testament to read, not to mention an endless selection of languages, versions, plans, and devotionals online.

This book is illegal in 53 countries.

Above that line is brushed a simple red cross. Red—for sacrifice. For Jesus’ blood. The cross that bought our freedom, that they burn off churches and mock Christian prisoners with in some of those 53 countries. The reason this book is illegal: the cross.

This book is illegal in 53 countries.

And we sit in our safe climate-controlled houses and try to decide which copy we want to read from this morning. If we take the time to read it at all.

Unless we live in one of those 53 countries.

Then maybe, if we have it at all, we only have one book of the Bible. Maybe only a section of a Bible that was split up among the entire church. Maybe only enough to hide safely, typed out on printer paper and hidden on a top shelf.

Or maybe we have an entire Bible, a complete copy for our family. Locked in a drawer, hidden in a mattress. Taken out after dark and read together.

It isn’t always safe to read it, but we make the most out of every chance we get. It’s risky enough to own it. Miss an opportunity to read it, and we might have missed our last one.

If you’re like me, you may know that the Bible is illegal in 53 countries. You give it a passing thought and go on to choose which copy you’ll read from that morning.

And you hold in your hands one of your complete copies of a book that is illegal in 53 countries.

And you sit in front of an open window and you read it, and it never crosses your mind that someone out there is dying to do just that. That isn’t a figure of speech. They’re literally dying.

One of the most convicting lines I’ve ever heard went something like this: “If a teenager in Afghanistan was given the same blessings as you, imagine what they would be able to do for God.”

Three complete copies of the Scriptures. That doesn’t count those belonging to the rest of the family or the extras we have stacked on a bookshelf. If it did, that number would easily reach 15.

A teenager in Afghanistan with 15 Bibles.

Would they give their own pastor the one thing he needed—an actual Bible—a treasure trove reaching far beyond the verses he knew by heart?

What if they weren’t already a Christian? Would they read that Bible? Let it change their life? Would that baby Christian start their own congregation, reach out and learn they weren’t alone?

Would a believer who had only ever heard of one passage of Scripture finally understand the glorious depths of what they believed in?

If a teenager in Afghanistan was given the same blessings you have been, imagine what they would be able to do for God.

But most of us with 15 Bibles aren’t doing half as much.

Personally, I believe it’s because we’re used to having 15 Bibles. We’re used to choosing which copy we want to use.

And we’re used to knowing it’s illegal in 53 countries.

Have you ever heard reports from Christians in restricted countries, saying they’re praying for American Christians?

Remember that when you’re tempted not to care about those 53 countries.

Remember that when you’re tempted not to take the time to read your Bible.

If a teenager in Afghanistan was given the same blessings you have been, imagine what they could do for God.

Remember that when you’re tempted to give him less than your best.

is a twenty-something kid at heart writing randomness between learning how to patch up traumatic injuries. She likes singing a little too loud, pretending she hates running, and procrastinating assignments to watch The Winter Soldier again.