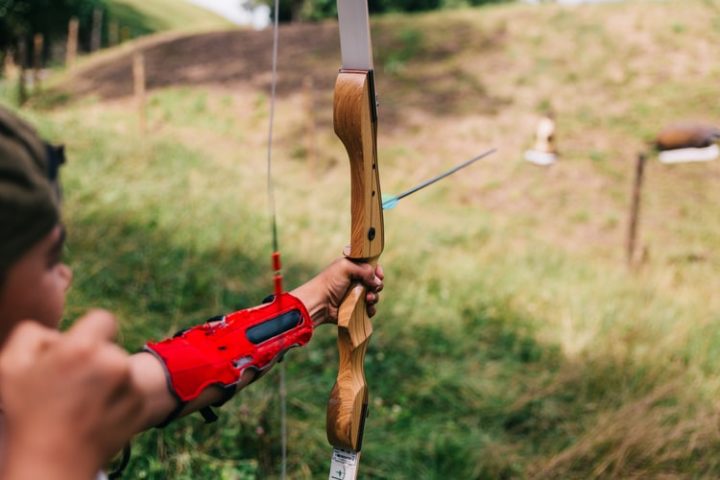 Fitting an arrow to the string, the crown prince took aim and released. The arrow flew through the air, landing a great distance away. A small boy–his servant–hurried to pick it up and bring it back to him. “Is not the arrow beyond you?” he called after the boy.

As he said those words, he remembered his excellent education, his training with a sword and bow, his preparation to be a leader. He had been raised to be the next king, but here he was laying that down. He had a choice to make. He could either seek his own kingdom or the kingdom of another.

With that simple question, “Isn’t the arrow beyond you?” he had laid down his right to the throne and endorsed the kingship of another.

When his servant came back, Jonathan sent him home. It was then that David stepped out of hiding. Jonathan and David embraced and wept. Then David left, fleeing for his life.

Jonathan was the prince. He was next in line for the throne after his father, Saul. He had a choice to make. In supporting David as the true king, he had to relinquish his own right to the throne.

When he called to his servant, “Is not the arrow beyond you?” it was a signal. Jonathan was telling David that Saul was intent on his death. But why tell David that? Why not allow David to die and become king himself after his father’s death? Jonathan supported David even though doing so meant losing his kingdom.

If you had been in Jonathan’s shoes what would you have done? It would have been all too easy to fight for your own kingdom and go against what God was doing.

You Have a Choice to Make

You and I have a very similar decision to make. We too have to decide whether we will fight for our own “kingdom” or for the kingdom of the true and rightful King. Jesus Christ is the rightful King but most of this world has not yet recognized him as such.

We live in a world that constantly tells us to turn inward, to fight for our own rights and desires, and to seek comfort and pleasure. These messages are attractive but they are the antithesis of our calling. Like Jonathan, we must forsake our own interests in order to fight for the kingdom of another.

What Are You Going to Sacrifice?

Are you seeking fame or wealth today or are you seeking Jesus alone? It breaks my heart to see so many people risking life and limb to become rich or famous, but so few willing to risk anything to advance the Kingdom of God.

CT Studd, missionary to interior Africa once wrote, “Last June at the mouth of the Congo there awaited a thousand prospectors, traders, merchants and gold seekers, waiting to rush into these regions as soon as the government opened the door to them, for rumor declared that there is an abundance of gold. If such men hear so loudly the call of gold and obey it, can it be that the ears of Christ’s soldiers are deaf to the call of God? Are gamblers for gold so many, and gamblers for God so few?”

Are we willing to become gamblers for God, laying aside comforts and pleasures in order to see His Kingdom advanced? Are we, like Jonathan, willing to lay aside our own interests in order to fight for the interests of our King?