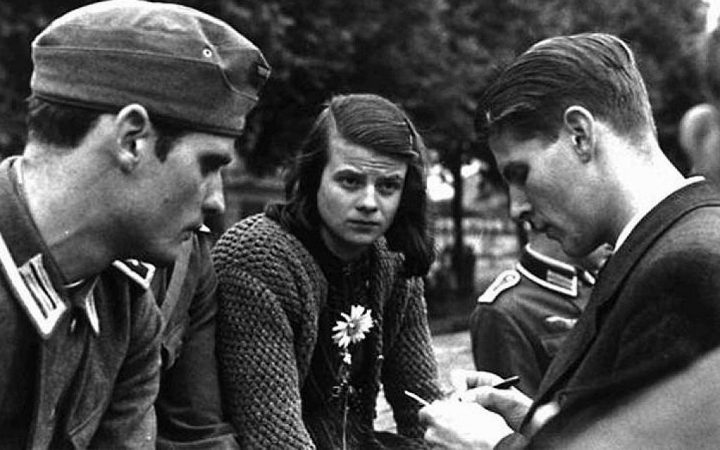 “Somebody, after all, had to make a start.”

On February 22, 1943, Sophie Scholl stood in a courtroom and spoke these words to the presiding judge. Looking at Sophie, one would never label her a hero, a revolutionary, or a resistant. She had an ordinary face, her features often framed by a quizzical frown that wrinkled her brow when she was deep in thought. She was a biology and philosophy student at the University of Munich and loved nature, books, drawing, and skiing. She had four siblings, one of whom faced sentencing alongside her, and was engaged to a young captain in the Wehrmacht.

Four hours after the judge read the verdict, pronouncing her guilty of high treason, Sophie was led, handcuffed, to a shed in the back of a Munich prison and executed by guillotine.

Growing Up in Nazi Germany

How did a twenty-one-year-old college student come to undertake resistance that ended in a death sentence at the hands of the Nazi regime? What path led this seemingly ordinary young woman to the events of February 22, 1943?

Less than ten years prior, Sophie and her older brother, Hans, had proudly joined the Young Girls League and Hitler Youth. But unlike most parents in the 1930’s, their father wasn’t elated by his children’s participation in the Nazi youth organizations. From the beginning of Hitler’s rise to power, he warned his children, “The Nazis are wolves, wild beasts; they misuse the German people terribly.” Though Hans and Sophie continued their Nazi youth activities, seeds of doubt began to grow. As a teenager, Sophie wondered why she was allowed to remain in the League of German Girls, while her Jewish friend was excluded.

In 1935, Hans was chosen out of all the boys in his unit to be the flag bearer at the Nuremburg Rally, a massive weeklong event designed to inspire attendees with the greatness of Hitler’s Reich. Hans and thousands of Hitler Youth paraded past the Führer and listened to speeches meant to spur them on to deeper loyalty.

But instead of returning home elated, Hans was disillusioned. The mind-numbing conformity he’d witnessed at Nuremburg made him want to rise up in challenge, not fall in step.

Hans became involved in the d.j.1.11, an underground youth group that encouraged individualism. In 1937, Hans was arrested for his involvement in the d.j.1.11 and spent weeks in prison before being released.

By now, the Scholls’ conformity to the regime was only outward. Their father illegally listened to BBC broadcasts, the only reliable source of news, and when Mrs. Scholl heard about the mass murder carried out by the Reich euthanasia program, the family was deeply grieved. “What has our country become,” they asked themselves.

In accordance with government requirements, Hans completed a term of compulsory military service before being granted permission to study at the University of Munich as a part-time student, part-time soldier/medic. After graduating high school, Sophie’s dream was to attend college with her brother. But first she had to perform requisite labor service, which dragged out into two years of grueling work before she was able to join her brother at the university.

Sophie arrived in Munich in May 1942. There, Hans introduced her to his friends—Alex Schmorell, an easy-going and artistic medical student who cherished a deep love for his Russian heritage, and Christoph Probst, a young man with a gentle nature and wide grin, who adored his wife and two little boys.

Unbeknownst to Sophie, Hans and Alex had determined to resist the regime and were making plans to print and distribute anti-Nazi leaflets. When Sophie discovered their secret, she immediately insisted on taking part. Using a Remington typewriter and a secondhand duplicating machine, the students wrote and printed a hundred copies of the first leaflet of the White Rose, depositing them in mailboxes across the city.

The leaflet began by stating that “Nothing is more unworthy of a civilized nation than to let itself be “governed” without opposition by an irresponsible clique that has yielded to dark instincts. It is certain that every honest German is ashamed of his government.”

Three more leaflets followed between June and July 1942. Each proclaimed the evils of the dictatorial regime, boldly stated the crimes committed by the Nazis, including the murder of the Jews, and urged readers to take action.

In July 1942, the young men were sent to Russia to serve as medics, while Sophie fulfilled compulsory service at an armaments factory. When the men returned in the autumn of 1943, the group reassembled, determined to continue their resistance. Aided by another student, Willi Graf, as well as others who worked on the fringes of the group, the students wrote a fifth leaflet, this time distributing thousands of copies. Again and again, they hazarded discovery, boarding late-night trains to cities in Germany and Austria, where they hurried through blacked-out streets to mail the leaflets in the hopes that varying postmarks would give the impression of a vast resistance network.

With newfound contacts in the wider German resistance movement and the assistance of their philosophy professor, Kurt Huber, the students sped forward with bigger and bolder plans. Thousands of leaflets poured from their rickety duplicating machine as the students labored to broaden the reach of their message.

On February 18, 1943, Hans and Sophie carried a suitcase and satchel stuffed with 1,700 leaflets to the university. While morning classes were in session, they flitted through the halls of the university, scattering copies of their sixth leaflet. Seconds before the bell rang, Sophie pushed a stack of leaflets off a third-floor balustrade, sending them cascading into the atrium below. A janitor spotted them. Hans and Sophie were taken into custody and brought to Gestapo headquarters. Their friend Christoph Probst was also arrested soon after.

For 17 hours, Sophie and Hans were interrogated. Finally, confronted with undeniable evidence after their apartment was searched, Hans and Sophie confessed. Brother and sister sought to shoulder full responsibility and spare their comrades.

Sophie’s calm demeanor and unwavering belief in her convictions made an impression on her interrogator and he offered her a chance to lessen her own sentence if she retracted her actions and placed all guilt upon her brother.

Fully aware of the fate awaiting her, Sophie refused.

Four days after their arrest, Sophie, Hans, and Christoph faced trial by Roland Freisler, the notorious People’s Court judge. During the trial, while Freisler raged against the students for their “treason against the Reich,” Sophie spoke up, “Somebody, after all, had to make a start. What we wrote and said is also believed by many others. They just don’t dare express themselves as we did.”

It mattered little to Freisler that the students had committed no actual crime, nor did he show mercy because one was the father of two small boys and an infant daughter, the other a medical student who’d tended the wounded in Russia, and the third a girl of twenty-one.

He sentenced all three to death.

Sophie, Hans, and Christoph met death courageous in their convictions and steadfast in their faith in God. Hans died as he had lived, shouting a proclamation of truth seconds before the blade fell—Long live freedom!

In the months to come, others involved in the group served prison sentences, including the Scholl parents and their two daughters. Alex, Willi, and Professor Huber were executed. “I leave this life with the knowledge that I have served my deepest convictions of the truth,” Alex wrote in his last letter to his family.

The White Rose: A Lasting Legacy

But the message of the White Rose would live on. In the summer of 1943, a member of the resistance smuggled a copy of the sixth leaflet out of Germany. Millions of copies were reprinted and dropped over German cities by the RAF. Today, hundreds of streets and schools are named after the members of the White Rose and their story has been the subject of books, plays, and an Academy Award nominated film. The lasting imprint of their legacy continues to inspire both young and old to speak out in the face of evil.

In a letter to a friend, Hans Scholl wrote, “Should one go off and build a little house with flowers outside the windows and a garden outside the door and extol and thank God and turn one’s back on the world and its filth? Isn’t seclusion a form of treachery, of desertion? I’m weak and puny, but I want to do what is right.” In another letter, he went a step further, “It’s high time that Christians made up their minds to do something. . . What are we going to show in the way of resistance . . . when all this terror is over? We will be standing empty-handed. We will have no answer when we are asked: What did you do about it?”

Perhaps the boldest statement of all came from Sophie when she said, “So many are dying in support of this regime. It’s high time someone died opposing it.”

While we may never be required to lay down our lives for our convictions, we are called to open our eyes to injustice and take action. Yet so often we choose the path of “seclusion,” content with the even tenor of our world and afraid of what speaking out may cost us. As teenagers, it’s easy to relegate doing hard things for later, when we’re older, better equipped, or have more time.

Sophie, Hans, Alex, and their comrades could have used any of these excuses. Likely, no one would have blamed them for keeping their heads down and focusing on surviving the war, as many of their peers did.

Instead, they “tore off the mantle of indifference” and “cast their decision before it is too late”—both quotes from their leaflets. They choose action because they believed in the truth of their convictions enough to risk arrest, imprisonment, and losing their very lives.

What action might you take? What sacrifice might you make? Whether raising awareness about racism, human trafficking, or anti-Semitism, using your time and resources on behalf of organizations that aid persecuted Christians or support the pro-life movement, or working at your local food pantry or homeless shelter, there are as many options as there are areas of need. Cultivate friendships with like-minded individuals and find ways to work together for the causes you share a passion for. Don’t devalue the impact your voice can have.

The fourth leaflet ended with a declaration that sums up the aim of the White Rose. To those who wrote them, the words were a battle cry. A refrain. A legacy.

“We will not keep silent. We are your guilty conscience. The White Rose will not leave you in peace.”

May our lives echo the words of these brave men and women. May we, in all seasons and times, add our chorus to theirs.

“We will not keep silent.”