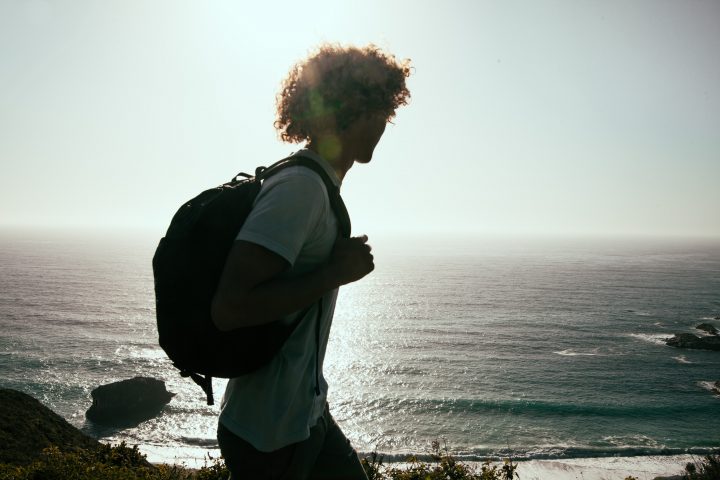 Have you ever experienced a huge life change?

I’m sure you have. You might think of the time you moved to a new city, changed jobs, or made a huge life decision. Some might think of when they got married, had a baby, or made a new friend that changed their life. Maybe on the other end of the spectrum, someone died, got sick, or walked out of your life.

One way or another, we’re all familiar with the feeling of looking back and not being able to see our life before this event happened. Sometimes it feels good to have something new come your way. Sometimes it rocks you to the core.

Whatever it is, I’m sure it changed you from top to bottom.

Last evening, I was reading in the 2nd book of Corinthians where Paul talks about the enormous life change we as believers undergo in the name of Jesus. As a good friend says, “You can’t wholeheartedly love Christ and stay the same.”

It’s true. Not only do we have the examples of Scripture to prove it, but the words of those whose lives have been turned upside down by radical grace. Grace has been defined as “Unmerited favor.” In other words, something that we will never be able to earn. It blows our minds and turns our lives into a total warzone. The things we used to do, we no longer find pleasure in. God’s blueprints call for a total renovation.

Have you ever walked into your room and seen an absolute disaster? If you’re anything like me, you can only let it get so bad before you have to do something about it. The problem is, I live in a room with a few others who aren’t as interested in keeping it as clean as I would like. So as a result, it can be easy for me to give up and give in to just leaving it a disaster. Bedsheets ruffled and crumpled in a ball in the corner of my bed, clothes piled like Mt. Ararat on my bureau and shoes placed strategically in positions so as to trip you up every single time. I walked in late one night several years ago and tried to make it to my bed in the dark only to wind up tripping over someone’s open drawer and smacked my head on the bureau. Suddenly the need to be as quiet as possible wasn’t as necessary anymore. Yeah, I’m human.

Paul says in 2 Corinthians that upon beholding the glory of the Lord, we are being changed into the glory we are beholding. This takes the pressure off of us, because we are being changed by something bigger than us. It’s not about being an image of perfection, it’s about reflecting the image of perfection! Which means that in order to correctly reflect him, we gotta live like him, the way he wants. Grace doesn’t give us license to do what we want, rather it radicalizes our lives to be what He wants.

Ambassadors of Another Kingdom

In times past, when a king wanted to make a treaty with another king, he would send an envoy or ambassador to represent his kingdom and make his desires known to the other king. Now, in this position, the king would expect the person he sent to represent himself and his kingdom in a manner that was pleasing to him. The ambassador could not act however he wanted or do whatever he wanted while in the king’s service. He had to be respectful and careful with his actions.

Grace doesn't give us license to do what we want, rather it radicalizes our lives to be what He wants. Click To Tweet

It’s the same with us. We are ambassadors of God’s kingdom, which means we have to live, walk and act in a manner pleasing to our king. No questions asked. Sorry to all you people who thought that grace was a free ticket to live however you wanted.

As Paul prays for the Colossian believers, he says these words: “That ye might walk worthy of the Lord unto all pleasing, being fruitful in every good work, and increasing in the knowledge of God;” This leaves absolutely no room for us to do whatever we like. Paul says that the walk of a believer is one that brings pleasure to God first, not ourselves. It brings forth fruit in our good works as we increase in the knowledge of God. I don’t know about you, but to me, it sounds like this is nothing like the way we used to be.

We are ambassadors of God's kingdom, which means we have to live, walk and act in a manner pleasing to our king. No questions asked. Click To Tweet

My favorite verse in the passage is where Paul uses a story found in the Old Testament where Moses had been spending so much time in the glory of God that when he came back down from God’s holy mountain, his face shone so brilliantly that the people of Israel could not look at him. Moses had to put a veil over his face. Paul says that the same veil was put over their hearts so that they could not see that the Old Covenant has been done away with by Christ.

But we are not blinded by that veil because we have seen Christ! The veil has been removed and in the spirit of God we have liberty! Which brings us to verse 18 which says: “And we all, with unveiled face, beholding the glory of the Lord, are being transformed into the same image from one degree of glory to another. For this comes from the Lord who is the Spirit.”

There it is. The changing of a life through the spirit of God. The veil is lifted from our eyes, we can see the power of Christ and what he has done. And we’ll never be the same.

Remember the dirty room example at the beginning of the article? Well, in order to live for God, we do have to take action.

Sometimes we need to get down into the dirty and start cleaning things up. Just because Jesus is the one who helps us, doesn’t mean we leave it all up to him. When he prompts us to move, we’d better move.

Start folding those clothes and putting them where they belong. Make your bed and put your dirty clothes in the hamper. And pick those shoes up so that neither you or other people trip over them. And if you have messy roommates who aren’t interested in either helping you or taking care of their own messes, maybe it’s time you found new roommates. I’m not saying you can’t still be around them but you should definitely consider limiting your contact with them and spend time with people who will encourage you in the word and Godliness.

Be open to the moving of the Holy Spirit when he calls you to action. That’s what he’s there for! Never dull out his voice.

Excuse me, I need to go straighten up my room…

Originally published on Words of Life.

is a 20 year old writer from the Old Dominion state where he is a contractor by day, writer by night. His desire is to live a life sold out for Christ and leave a legacy worthy of His name. His motto: To know and be known of God. A huge music connoisseur, you will likely find him in his free time buried in a new writing project while listening to a new album. He writes as a staff writer for The Rebelution in Theology and Christian Living and on his personal blog Words of Life.