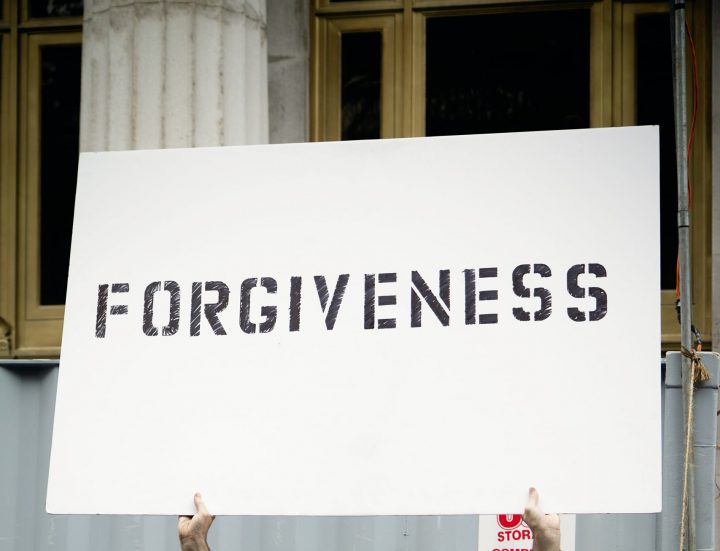 When someone apologizes to you, do you respond with the obligatory “it’s ok,” or take it a step further and tell that person you forgive them for the offense? A few weeks ago, I was in a disagreement with a friend. When she apologized, I sent her a text back that said that I forgave her. It feels strange when you’ve been conditioned to say “it’s ok” and just move on.

Forgiveness is weird. It’s outside of logic. It is incredibly hard. It’s not a part of our culture. But it’s so amazing.

Jesus spent his entire life loving those who hurt him. Not once did he say our sin is ok. Not once did he push it under the rug or downplay it. Jesus was completely realistic about the ways we have hurt him through sin.

When wounded, we feel as if we deserve to be angry against the one doing the wounding. That would be fair punishment, right? But looking to Christ, we see a better way. Forgiveness is a countercultural and surprising response to pain.

God’s forgiveness isn’t just a demonstration of His love for us. It is a great display of justice. If a bill is paid on your behalf, it would be unfair to still be charged for it. A great debt has been paid on our behalf. Every wrong thing we’ve ever done against God has been paid for by the perfect life of Jesus Christ.

His sacrifice on the cross took care of our debt. To hold our sins against us would be unjust on God’s part. If we have been forgiven of every offense, then it is unjust to hold someone’s sin against them.

Practice justice by forgiving others, by giving up the anger you think you deserve to cling to.

Setting Down the Bookbag

Before I got my driver’s license, I depended on my neighbor to drive me to school. One day she was going on a college visit, and my parents weren’t able to drop me off, so I walked to school.

I thought carrying a heavy bookbag a mile on foot would be difficult, but I soon got used to it. By the time I got to class, I had gotten used to the weight. It didn’t feel heavy until I dropped it and realized what I had been carrying.

Letting go of anger and taking a step towards forgiveness feels like taking off a heavy bookbag. You might have been carrying it for a week or even a month or year, but it started to feel like part of who you were.

The anger, bitterness, and resentment that you first thought you deserved? You don’t notice it anymore. Those become a part of life. That weight on your shoulder? That’s just how it is.

You don’t notice the extra weight after a while. But take off the bookbag and see how you can then run. There is no experience quite as liberating.

Colossians 3:13 says “Bearing with one another and, if one has a complaint against another, forgiving each other; as the Lord has forgiven you, so you also must forgive.” The way we are loved can affect the way we love others. In the same way, the forgiveness we experience from Christ should shape the way we forgive others. Ultimately, the way we forgive should point to a greater forgiveness that can only be found in Jesus.

Somehow forgiveness has gone out of style. It’s not a trend. It’s not normal or expected.

Let’s do something hard. Let’s bring back forgiveness.

is a 18-year-old Christian from North Carolina. She loves Jesus, spending time with people, books, writing, playing the piano, and running. Sadie is passionate about helping other people understand Christianity and the beauty of a life with Christ. She writes to reach others with the truth of the gospel.