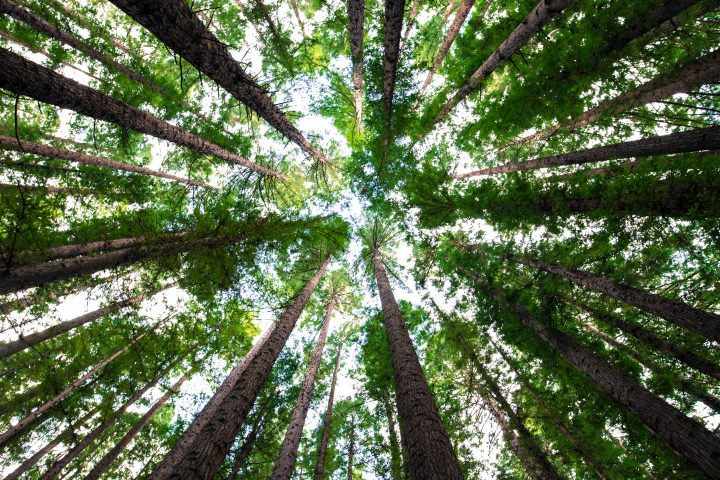 To say my dad likes the outdoors might be an understatement. He has bookshelves full of books on birds, trees, and mushrooms. His major in college is wildlife conservation. Not a day goes by when he is not counting the birds somewhere around Shelby County. One could say he loves nature.

But my dad is not a tree hugger –not by a long shot. He avidly watches baseball, takes our mom on regular date nights, and watches family movies on Friday nights. But most importantly, my dad is a strong Christian. And he’s a conservationist.

Some people, both believers and nonbelievers, argue that Christianity and nature conservation can’t mesh. There are those who link conservation and being an overzealous, liberal-minded hippie. But I think there can be a middle ground. Nature is a gift from God. And I think we can all agree that God’s gifts need our care.

In short, I believe that Christians have a responsibility to tend to the earth. Here’s why.

God Provided for His Creation

God takes care of His creation. This is obvious to us as Christians since we know and can sometimes sense God’s hand at work in our lives.

So why does it come as such a shock to some that God cares for the earth He created as well?

In Matthew 6, Jesus teaches us that God provides for the birds: “Look at the birds of the air: they neither sow nor reap nor gather into barns, and yet your heavenly Father feeds them. Are you not of more value than they?” (Matthew 6:26).

In Matthew 10, birds are mentioned again as Jesus tells His disciples that God will care for them: “Are not two sparrows sold for a penny? And not one of them will fall to the ground apart from your Father” (Matthew 10:29).

Back in Matthew 6, Jesus also noted that God cares for the grass: “But if God so clothes the grass of the field, which today is alive and tomorrow is thrown into the oven, will He not much more clothe you, O you of little faith?” (Matthew 6:28).

If the Almighty God cares for something as seemingly insignificant as grass, why shouldn’t we follow His example?

God Commanded Us to Be Stewards

On two separate occasions, humans were instructed to “have dominion over the earth”.

In Genesis 1:27-31, God gives the earth and its inhabitants to Adam and Eve to care for. They are told to have dominion over the earth (Genesis 1:28).

After the Fall, God sent a Flood on the earth, wiping out everyone and everything, except for Noah, his family, and the animals on the ark. After the flood, God blessed Noah and his sons. He also gave them the responsibility of tending to His creatures saying, “Into your hand they are delivered” (Genesis 9:2).

As the descendants of Adam, Eve, and Noah, don’t we have a responsibility to obey the charge God gave His people to care for the earth He made?

Newsflash: we are all human. This inevitably means, as sinners, we do not always give God the glory He deserves. But even in a broken world, God’s creation still shows the world who He is, and what He has done. Where people may fail to give God the praise He deserves, the earth is still a testament to His glory.

David recognized this and wrote about it extensively. In Psalm 8, he praises God, “Oh Lord, our Lord, how majestic is Your name in all the earth!” (Psalm 8:1,9).

David is obviously in awe of nature as he writes: “When I look at Your heavens, the work of Your fingers, the moon and the stars, which You have set in place, what is man that You are mindful of him, and the son of man that You care for him?” (Psalm 8:3-4).

David also notes that God has given man the responsibility to take care of the earth and its inhabitants. He says, “You have given him dominion over the works of Your hands; You have put all things under his feet, all sheep and oxen, and also the beasts of the field, the birds of the heavens, and the fish of the sea, whatever passes along the paths of the seas” (Psalm 8:7-8). David makes it very clear that God gave us dominion over all living creatures.

And this isn’t the only time David mentions God’s glory shining through nature. In Psalm 19, he notes that “the heavens declare the glory of God” (Psalm 19:1a). He goes into more detail in Psalm 24: “The earth is the Lord’s and the fullness thereof, the world and those who dwell therein, for He has founded it upon the seas and established it upon the rivers” (Psalm 24:1-2).

David saw God’s glory shown through His creation; shouldn’t we keep letting the light of God shine through the earth He made?

We Serve Others by Conserving Nature

As Christians, it shouldn’t come as a surprise that we’ve been called to serve other people. But how does that extend to aiding in conservation? By preserving nature, we are helping others who love nature in many ways. We’re helping people continue nature-oriented hobbies (hiking, birdwatching, etc.). We’re helping people keep their jobs working for both national and local parks and forests.

Paul instructs us to help others in Galatians: “Do not use your freedom as an opportunity for the flesh, but through love serve one another” (Galatians 5:13).

Later in Philippians 2:4, we are told to “look not only to your own interests but also to the interests of others”. If a way to help people (and bring glory to God) is to take care of nature, why don’t we jump at the chance?

Where Do We Go from Here?

It doesn’t take much to take care of the environment. You don’t even have to spend long hours cleaning out the acre of land near your house (although if you want to, who’s to stop you?).

Being aware of the products you use in your everyday life and how they affect nature is a big step in conserving wildlife and plants. Taking time to recycle is another significant way to help. Any way you look at it, these are two pretty easy ways to care for God’s creation.

When we take time to care for a gift God has granted us, we’re showing the world God’s glory through His creation.

is an 18-year-old college student from Memphis, Tennessee. When Cate is not indulgently reading young adult novels or passionately playing her guitar, she might be studying for school, writing songs for her friends and family, and writing stories of her own. Her favorite music genre is rock and her favorite book of the Bible is Romans. Cate's mission in life is to give glory to God in whatever ways she can.