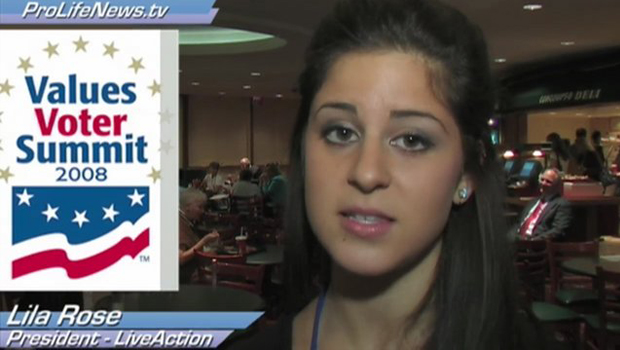 Lila Rose, 18, is a sophomore at UCLA and the founder of Live Action, a pro-life organization on campus. In March, she visited a Planned Parenthood clinic in Los Angeles armed with a hidden camera, posing as a 15-year-old who had been impregnated by her 23-year-old boyfriend.

Though California law requires abortion providers to report all cases of statutory rape to the police, a staff member at Planned Parenthood instructed Lila to lie about her age so she could protect her boyfriend and go through with an abortion.

Planned Parenthood: If you’re 15, we have to report it. If you’re not, if you’re older than that, then we don’t need to… So we still have to call the police, and they still have to talk to you, but we aren’t going to force you do anything, basically.

Planned Parenthood: You could say 16.

Planned Parenthood: Well, just figure out a birth date that works. And I don’t know anything.

The spring quarter edition of Live Action’s student magazine The Advocate broke the story last Tuesday, including a link to access the hidden camera footage on YouTube. On Monday, Lila received a letter from Planned Parenthood threatening legal action if she didn’t stop her undercover investigations, remove her videos from YouTube, and turn the original tapes and all copies over to Planned Parenthood.

“If you do not agree to take these three steps, [Planned Parenthood] will seek all legal remedies with no further warning to you,” the letter warned.

Lila has been forced to take the clips off YouTube, but CNSNews.com offers two versions of the video that were obtained before YouTube clips were deleted. To download them, click here (clip) or here (extended).

UPDATE: Third parties have loaded the clips back on YouTube, now with improved subtitles and audio. See them and related videos below:

“Nothing changes the truth of what’s contained in those videotapes,” David French, Lila’s legal adviser, told CNS. “Planned Parenthood was advocating that a patient lie, advocating a way around mandatory reporting requirements for statutory rape, and … trying to bully her regarding the tapes themselves [cannot] change those facts.”

Meanwhile, Lila has been making a number of media appearances to continue to stand up and speak out for truth and the lives of the unborn. Tonight she will be appearing on the national news show The O’Reilly Factor at 5:00 PM (PST).

IMPORTANT UPDATE: The Advocate has just reported that Lila’s appearance on The O’Reilly Factor has been rescheduled for tomorrow evening. That’s Thursday at 5:00 PM (PST) and again at 8:00 PM (PST) on Fox News.

Lila is an old acquaintance of Brett’s and mine through NCFCA speech and debate and we applaud the work she is doing at UCLA to advance a culture of life. Please join us in supporting and praying for her in the days and weeks ahead.

+ Visit The Advocate Online for Updates +