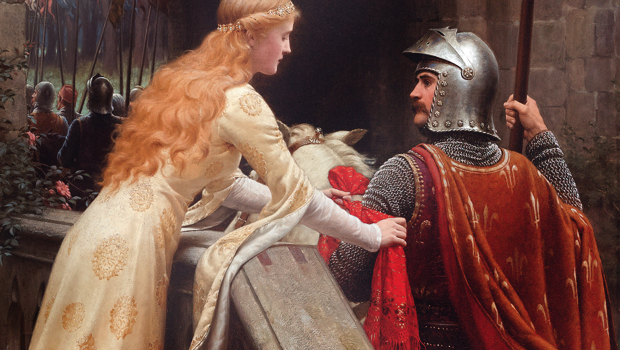 I love those old fairy tales. You know, the ones where the valiant knight saves the princess? The ones where chivalry and honor are boldly demonstrated and called for? Those ones.

It always makes me sad when I’m out grocery shopping and I don’t see men opening doors for women anymore, or helping them carry the groceries. Or even when I look at relationships where either the man is mistreating his girl, or the girl won’t let her guy be a man.

Don’t you see something wrong with this picture? How far society has strayed from the knights and ladies of old? Even simple etiquette is not as valued today as it once was. Women were graceful. Men were noble. Women weren’t feministic. Men were … well … men. And I’m not saying mankind was perfect then (certainly not!). But they at least valued good character.

Hilary Clinton promises to further women’s rights. Men are supposed to kick back and watch as women take charge of the world.

True manhood does not compromise a woman’s purity, but heroically protects it. How many times do we see in our culture the exact opposite of this?

Knights and princes protected women in those days … not hurt them. Did you know that one out of every three women will be abused at some point in her life? And that about 4,000 women die each year due to domestic violence? On average, more than three women are murdered by their husbands or partners in this country every day. Every day. What does that say about our country?

Also, you see in this generation how our young men aren’t getting up off the couch to work. To be honest, they’re lazy. You don’t see very many of them these days rising against the norm of video-gaming and actually doing hard things. Our young men truly have the potential to conquer some amazing — maybe even crazy — adventures God has in store for them.

I love this quote by Raising Real Men by Hal and Melonie Young, “Manliness is much more than brute force, it’s a heart attitude of confidence and boldness to accomplish the mission given by God.”

And also, all those knights had a code that they followed, that should still be applied today, called the “code of chivalry”. If you’ve read books like The Song of Roland or Sir Gawain and the Green Knight, you probably know what I’m talking about.

This is what a typical knight was to follow. And shouldn’t this be what Christian men should follow?

It’s amazing how the femininity of the women of old has been lost amongst the petitions for women’s rights, and articles about women being the “better” gender, and so on.

Young ladies, what happened? Why act offended when a guy offers to open the door for you, or help you carry that huge load of books? That’s what they’re supposed to do. By not letting them show you respect and honor, you’re not letting them be men. I think that if more young women rose and acted like ladies, more young men would stand up and act like men.

Remember the days when women would wear dresses? Now, I am not saying that women should wear skirts and dresses and not wear pants. My point is: what happened to dressing ourselves so we respect others around us, and carrying ourselves with grace?

It seems like, now, we dress to show as much skin as we can. Yes, it will give us attention. But, really, is that the kind of attention we want? Modesty and grace are beautiful, and I’m sure most (respectable) guys would agree.

In conclusion, I find myself looking back to the knights and princesses and nobles and ladies, and longing to see the chivalry and grace abound in our culture once again.

But I can’t do that all by myself.

Will you join me and take a stand, rise up against the low expectations, the jeering from friends, the lack of Christian morals in our country, and grow into true men and true women?