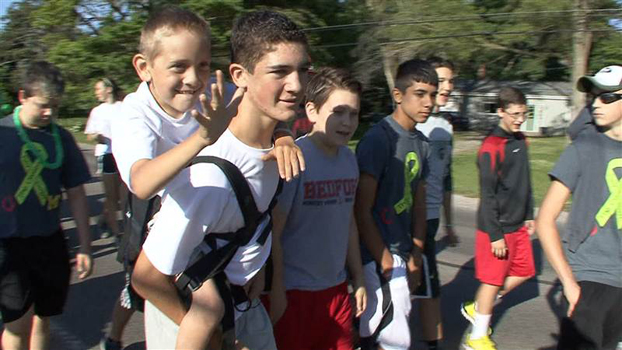 (AP) — A Michigan teenager who wanted to raise awareness about cerebral palsy by walking 40 miles with his younger brother strapped to his back battled heat, rain, fatigue and more to finish the trek Sunday.

Hunter Gandee, 14, had been planning for weeks to pull off the walk, hoping to put a face on the muscular disorder that prevents his 7-year-old sibling, Braden, from being able to walk without help. But all his organizing couldn’t prepare him for the conditions he faced as he packed the 50-pound boy over two days.

He even thought about giving up along the way.

“Honestly, yes, there was a point that we did consider stopping,” Hunter said. “Braden’s legs — the chafing was getting pretty bad. We did have to consider stopping. It was at about the 30-mile point.”

A phone call changed all that.

Hunter reached out to a friend, who said a prayer for the brothers. That, combined with some rest and a change in how Braden was positioned on his brother’s back, helped the boys make it the final 10 miles. It may have taken a bit longer than they anticipated, but the Gandees and more than a dozen of their family members and friends strolled up a winding road Sunday toward the University of Michigan’s wrestling center.

At the top of the hill, Hunter lifted up Braden so he could touch a “Go Blue” banner erected for them near the walk’s endpoint. The move was met with thunderous applause and cheers from those who had gathered to see the boys finish the trek.

Photos courtesy of NBC News and Mike Householder of the Associated Press.