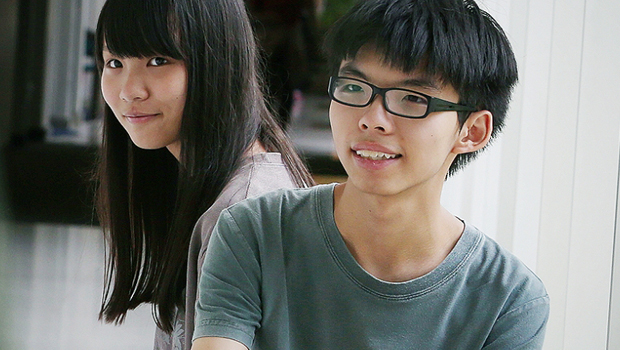 HONG KONG (The New York Times) — The slight teenager with heavy rectangular glasses and a bowl cut stood above the ocean of protesters who had engulfed downtown Hong Kong. His deep voice was drowned out by cheers, but the crowd did not mind: They knew him and his message. It was Joshua Wong, a 17-year-old student activist who has been at the center of the democracy movement that has rattled the Chinese government’s hold on this city.

“When I heard the national anthem starting to play, I certainly did not feel moved so much as angry,” Mr. Wong said a few hours later, after a protest at a flag-raising ceremony on Wednesday morning to mark the Chinese National Day holiday. “When it tells you, ‘Arise! All those who refuse to be slaves!’ — why is our treatment today any different from the slaves?” Mr. Wong emerged as a figure in Hong Kong’s activist circles two years ago, when he rallied students against a government plan to introduce “patriotic education” in schools, attacking it as a means of Chinese Communist Party indoctrination. He played a pivotal role in setting off the demonstrations of the past week, leading a surprise charge on a government building that resulted in his arrest and prompted thousands to take to the streets ahead of schedule. Local newspapers with close ties to Beijing have sought to smear him as a tool of the United States.

In reality, Mr. Wong is troubling confirmation for the authorities that the first generation in Hong Kong to grow up under Chinese rule is by many measures also the one most alienated from Beijing’s influence. He was born less than nine months before this former British colony’s handover to China in 1997, and raised here at a time when the party has tried mightily to win over the people and shape them into patriotic Chinese citizens.

His prominence in the protest movement also embodies a shift in politics here — youth anger amplified over the Internet, beyond the orbit of traditional political parties — that has confounded the local government and infuriated its Communist supervisors in the mainland.

That shift has made something of a political star of Mr. Wong, who comes across as a hybrid of a solemn politician and a bashful teenage sensation. These days, if he is not surrounded by admiring supporters, he is usually mobbed by television cameras and reporters. Even before the most recent round of protests, strangers would sometimes approach him to shake hands or offer a pat on his shoulders and ask about his exam scores and schoolwork.

Mr. Wong is keenly aware of the influence that he and his classmates wield. As early as July, well before Beijing proposed the election rules that are the target of the current demonstrations, Mr. Wong told The New York Times in an interview, “Electoral reform is a generational war.”

Chen Yun-chung, an associate professor of cultural studies at Lingnan University in Hong Kong, said Mr. Wong and his generation of high school activists, combining idealism and organizational skills, had outflanked both the government and the older, more cautious generations of democrats in Hong Kong.

“Their mentality is very different from the older generation, so I call them mutants, in a good sense, like the X-Men,” he said. “There is always a danger of an even harsher crackdown that will scare the hell out of Hong Kong people. But at the same time, I don’t think these mutant leaders are just daydreamers. They know that they might not get what they want, but most of them are prepared to fight on.”

Mr. Wong represents a “culture of resistance that is idealistic and very persistent among the high school students,” he added. But few expected Mr. Wong to have such a critical impact on events this past week. The democracy movement had appeared to be flagging, and students who had been boycotting classes were planning to mark the end of their campaign quietly on Friday night with a showing of video messages of support from Taiwanese activists.

As the video ended, Mr. Wong, speaking on the stage beside the screen, took many in the audience by surprise by urging them to seize “Civic Square,” the name that activists use for a forecourt to the Hong Kong government headquarters. Moments later, about 200 protesters eluded guards and took the square to loud cheers. But Mr. Wong was arrested before he made it and was dragged away in handcuffs.

News and images of Mr. Wong’s arrest spread quickly on social media, and the occupation of the forecourt became the nucleus of a protest that attracted tens of thousands of supporters. The police tried to break up the demonstration on Sunday with arrests, pepper spray and tear gas, provoking more public anger and bringing even larger crowds onto the streets, which have been occupied since.

The authorities held Mr. Wong for two nights before a judge granted a habeas corpus petition for his release.

Lee Cheuk-yan, the chairman of the pro-democracy Labor Party, said he was both stunned and heartened by the outpouring of youthful protest in the streets in the following days.

“You look at the faces here, and they are very young,” Mr. Lee, 57, said Tuesday night as he stood on a platform where he had been speaking to a vast crowd. “The old men will die, but the young will live on. They will beat them.”

He then resumed speaking to the young crowd through a loudspeaker, and repeated his comment to a roar of approval.

Mr. Wong, who is just shy of his 18th birthday, when he will gain the right to drink alcohol, is a veteran of theatrical protest politics. While in high school, at age 14, he and a classmate formed a youth group, Scholarism, to fight the “patriotic education” plan proposed by Beijing’s handpicked leader in Hong Kong, Leung Chun-ying.

At first, their Internet-based movement was seen by many residents as quaintly naïve, but as more students joined, it became a potent force in the campaign against the curriculum changes. After big street protests in 2012, the Hong Kong government shelved the plan. Since then, Scholarism has been a major force in promoting demands for democratic elections that would allow voters to nominate candidates for the city leader, and it promoted a student boycott of classes last week.

“If you told people five years ago that high school students would get involved in politics, they wouldn’t have believed you,” he told The Times in July. “For students, what we have is persistence in our principles and stubbornness in our ideals,” he said, adding, “If students don’t stand in the front line, who will?” Hong Kong’s news media has treated him with some of the intensity that it usually devotes to film and pop idols. In July, interest was so high in Mr. Wong’s university entrance exam score that he held a news conference. (Mr. Wong’s score turned out to be middling by Hong Kong’s rigorous standards, and he has enrolled in a local university that specializes in distance learning.)

Mr. Wong has said that he acquired his passion for politics from his parents, Grace and Roger Wong, Protestants who kindled a concern for social injustice and have said they are proud of their son but otherwise stay out of the spotlight.

Mr. Wong and the wave of youthful protest he has helped inspire are much less open to compromise than the traditional democracy camp in Hong Kong — a rift that may widen if the Chinese government offers only mild concessions and the protests continue. He did not respond to repeated calls and messages seeking an interview.

In an interview earlier this year with a Hong Kong publication, Mr. Wong argued that “compromising before you even begin fighting is illogical.”

“I have no problems with negotiating,” he added. “But before doing that, you better have some bargaining chips. If you don’t have that, how do you fight a war?”