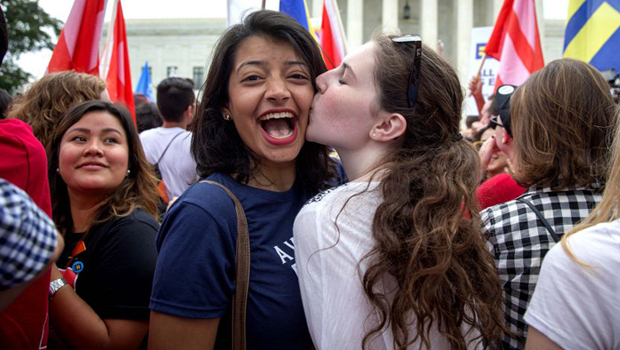 We live in turbulent times.

This is a world where black and white have been blurred to gray and institutions entrenched in the very fabric of society are now open to debate.

On Friday, June 26, the Supreme Court of the United States (SCOTUS) legalized the recognition of same-sex marriage in all 50 states.

As faithful Christians, we want to give thoughtful consideration to so serious and essential an issue. We must not be hateful, but we are called to stand upon God’s Word and be unswerving in our commitment to truth.

In that line, we’ve chosen a few resources that we think will adequately and appropriately educate and equip Rebelutionaries about what this decision means and how to respond in a way that glorifies God and extends love to those around you.

Explainer: What You Should Know About the Supreme Court’s Same-Sex Marriage Ruling

What was the same-sex marriage case that was decided by the Supreme Court?

The Supreme Court issued its ruling on the case of of Obergefell v. Hodges, which is consolidated with three other cases—Tanco v. Haslam (Tennessee); DeBoer v. Snyder (Michigan); Bourke v. Beshear (Kentucky). These cases challenged two issues concerning whether the Fourteenth Amendment must guarantee the right for same-sex couples to marry.

The Challenge of Same-Sex Unions

We are facing a true moral inversion — a system of moral understandings turned upside down. Where homosexuality was even recently condemned by the society, now it is considered a sin to believe that homosexuality is wrong in any way. A new sexual morality has replaced the old, and those who hold to the old morality are considered morally deficient. The new moral authorities have one central demand for the church: get with the new program.

This puts the true church, committed to the authority of God’s Word, in a very difficult cultural position. Put simply, we cannot join the larger culture in normalizing homosexuality and restructuring society to match this new morality. Recognizing same-sex unions and legalizing same-sex marriage is central to this project.

My sense is that we do not realize what a calamity is happening around us. The new thing — new for America, and new for history — is not homosexuality. That brokenness has been here since we were all broken in the fall of man. (And there is a great distinction between the orientation and the act — just like there is a great difference between my orientation to pride and the act of boasting.)

What’s new is not even the celebration and approval of homosexual sin. Homosexual behavior has been exploited, and reveled in, and celebrated in art, for millennia. What’s new is normalization and institutionalization. This is the new calamity.

The Church and Homosexuality: 10 Commitments

We will treat all Christians as new creations in Christ, reminding each other that our true identity is not based on sexuality or self-expression but on our union with Christ.

We will extend God’s forgiveness to all those who come in brokenhearted repentance, everyone from homosexual sinners to heterosexual sinners, from the proud to the greedy, from the people pleaser to the self-righteous.

Photo courtesy of Doug Mills and The New York Times.