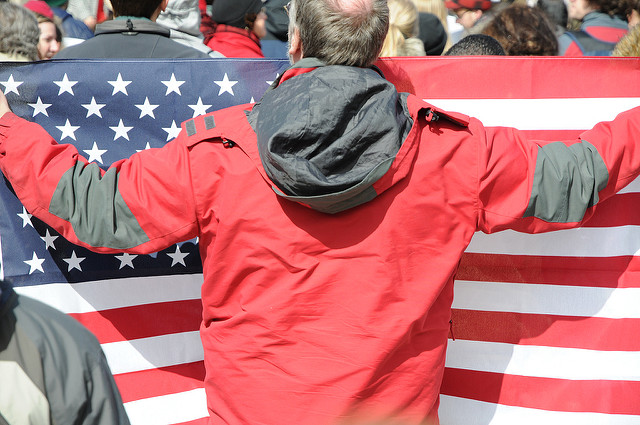 I am a citizen of the United States of America.

Section 1 of the Fourteenth Amendment of the United States Constitution affirms this.

I am also a citizen of heaven.

The apostle Paul affirms this in Philippians 3: “But our citizenship is in heaven. And we eagerly await a Savior from there, the Lord Jesus Christ, who, by the power that enables him to bring everything under his control, will transform our lowly bodies so that they will be like his glorious body” (20-21).

Being a citizen of the United States affords me certain benefits, chief among which is the ability to vote in federal and state elections.

Truth be told, I have scant interest exercising this freedom in what can arguably be described as the most contentious and divisive presidential election in history.

I have zero doubt that teenagers in other countries are shaking their heads in disbelief too.

In the midst of this tension, I find myself pondering the here and now and the hereafter. I’m pondering the brevity of this life on earth and the permanence of the next life in heaven. Doing this quickly right-sizes my priorities and my perspective.

Speaking of priorities, politics are low on this list, maybe at the bottom.

I like to think of myself as a well-informed person on the subject of politics, though. I frequently watch the news and listen intently to anchors, pundits, and local, state, and federal leaders. I internalize their perspectives and sift out the wheat from the chaff.

Still, politics are a low priority for me. I don’t talk about them with others either.

I am a citizen of heaven.

The love that I have for the United States is robust. I remember the sense of patriotism that developed in grade school as I placed my right hand across the heart and recited the pledge to Old Glory.

I do the same when the national anthem is performed prior to a ball game or a foot race somewhere in the nation. And I still get misty eyed on July 4th as the fireworks light up the sky and inspiring tunes blare out of the amphitheater speakers.

What’s behind this tendency to weep in moments like this?

I suppose it’s independence. Freedom. Opportunity. Every citizen of the U.S. has the chance to pursue their dream. Be it a teacher, professor, attorney, doctor, accountant, police officer, therapist, actor, fire fighter, athlete, or even a politician, the professions are plentiful.

We are free to live free.

I know this seems obvious, but I was taken aback as this truth became clearer in the following days. Permit me a moment to clarify this epiphany.

City Upon a Hill

Have a look at Matthew 5:14: “You are the light of the world. A city set on a hill cannot be hidden.”

The charge of these words from Jesus is straightforward. Be a light. Or in the words of theologian John Wesley,

“The very design of God in giving you this light was that it might shine.”

In short, we usually recognize this verse from the Bible first, but the phrase “city upon a hill” happens to be in another well-known text. John Winthrop, the future governor of the Massachusetts Bay Colony, wrote and delivered A Modell of Christian Charity in 1630 on board the ship Arbella to a devoted group of Puritans who were traveling from Great Britain to North America.

They were on a divine mission.

The optimistic Puritans intended to set up a New England town structured as a community of faith, a community underscored by virtues like kindness, sharing, and selflessness. The people intended to live out Matthew 5:14 – without fail.

Incidentally, this “city upon a hill” imagery has carried forth from the time of Winthrop and the Puritans. The phrase has become a political talking point by U.S. Presidents in the last fifty years or so. John F. Kennedy invoked it in a 1961 speech; Ronald Reagan referenced it before his election and prior to departing the White House; and in a 2006 speech, Senator Obama noted Winthrop’s formidable “American experiment.”

Senator Obama used a striking term in his commencement speech at the University of Massachusetts at Boston. American experiment. John Winthrop’s experiment was noble and bold for sure, but he apparently felt compelled to include the pressure that he felt from a watching world in his 1630 sermon.

Would he and the other Puritans succeed? His message closes with this warning (edited from the original 1630 text for spelling):

The eyes of all people are upon us. So that if we shall deal falsely with our God in this work we have undertaken, and so cause him to withdraw his present help from us, we shall be made a story and a by-word through the world. We shall shame the faces of many of God’s worthy servants, and cause their prayers to be turned into curses upon us till we be consumed out of the good land whither we are a going.

Keys to the Kingdom

Fast forward to 2016 – 386 years have elapsed since Winthrop delivered his sermon to a group of arduous Puritans with high hopes. Has this “American experiment” succeeded or failed? Is America still a city set upon a hill?

Some may say it is, while others may diverge and say no. As followers of Jesus, a more appropriate question should be at the forefront of our minds.

Where is our home?

Which citizenship matters more? My residence is in the state of Georgia, but this isn’t my home, much like the fact that my flesh and bone is a temporary holding place for my spirit. My soul longs to be with God, and wherever that is, I call it home. Rest. Refuge. Peace.

The book of Revelation describes the scene that’s coming one day: “And I heard a loud voice from the throne saying, ‘Look! God’s dwelling place is now among the people, and he will dwell with them. They will be his people, and God himself will be with them and be their God’” (21:3).

In the following verse, John goes on to say that the “old order of things has passed away.” I can only speculate what John, the author of Revelation, means by “old order.”

But in light of the city upon a hill illustration, the 2016 presidential election, and the spiritual angst swelling inside me, I can only conclude that followers of Jesus in America, Canada, Great Britain, France, Haiti, Australia, Mexico, and across the earth are the city set on a hill.

We are the salt and light of the world (Matthew 5).

We transcend geographical borders, but we are united under a single king – the King of Kings (Revelation 19:16).

We are the kingdom of God who stand together under the banner of our one true King.

As it stands in America right now, sinful, flawed people are going to elect a flawed man or flawed woman as our next President. So it is in other countries and their respective elections. The ramifications of voting for elected officials anywhere seem staggering, and they understandably put us in a state of unease.

Jesus isn’t a Democrat, Republican, or Libertarian – nor is his Father – our great God.

He didn’t come to take a side. He came to take charge.