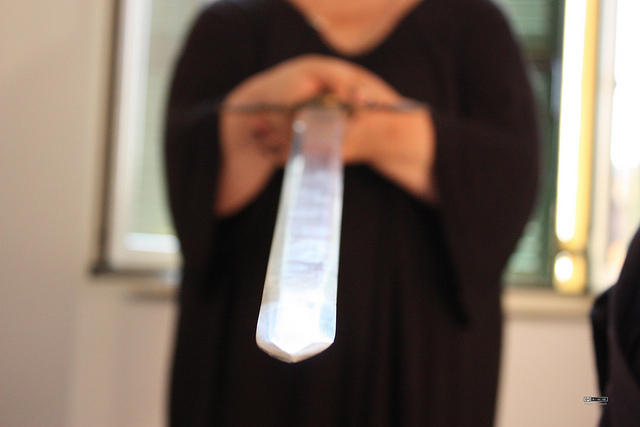 I got a sword recently.

Ok, not a real one, but one of those heavy-duty training swords, because that’s the kind of nerdy present that I love. It’s amazing, and cool, and wonderful, and — terrifying.

Because it’s heavy. It’s weighted. It is made to be used as a sword. It’s not a toy, like those little light sabe– *cough*, excuse me, “star swords” — that sat beside it under the tree. Those I can twirl and spin around and accidentally hit myself with multiple times, with little harm to anything except my pride.

But not this. This is made to be used, as a sword.

So I train myself.

Flailing this sword around isn’t an option. So I’ll  go and learn the correct stance (hooray for those random You-tube videos that teach these things!). I’ll learn the moves and what they’re called.  I’ll practice with my brother, slowly and carefully, every move choreographed and communicated to the other person. And I’ll work to show myself an adept swordsman, in good control of both my weapon and my body.

But as Christians, we have another sword. And sometimes I wonder if we fear it enough.

Because a healthy fear of your weapon is required for proper use. That’s why guns have safeties, that’s why you always double-check that it’s unloaded. Because when you’re irresponsible with your weapon, you are responsible for the damage.

But sometimes we’re most negligent with our most powerful weapon. A weapon that can pierce any, that divides between the bone and the marrow itself. The Word of God.

Because the Bible is powerful. The Scripture is potent. And the Gospel is dangerous. Not in the sense that it will hurt you — or rather, it will, since it tells you to kill the flesh — but because it will not let you be the same. As precise as a scalpel, it pierces between the joints and marrow. It slices open and lays bare the thoughts and intents of the heart. Its skill reaches even to the dividing asunder of soul and spirit, distinguishing between those invisible things that have puzzled philosophy of old. (Heb 4:12) The Word of God will lay you bare. Those webs of deceit and walls of self-righteousness don’t stand a chance.

But even the weakest thread will stand forever, if nothing is ever used to cut it.

Because so often we don’t treat the Scripture as a weapon. It has some nice morals, some good stories. I’m feeling down, so I’ll go look at pretty verses to make me feel all fluffy. And you know, none of those are completely wrong. There are fantastic guides about right and wrong in there, some very comforting verses, and have you read about Gideon? Now there’s a story!

But that’s not what it’s really for.

Its purpose is the Gospel.

I could use my sword for many things. It’s heavy; it could make a good (albeit long) doorstop. If I mount it on my wall, I could hang some jackets on it too. But those are missing the sword’s purpose, its ultimate reason for existing. A sword is made to fight with.

And we are in a war. And our sword is given to us for our rescue mission.

Because, really, that’s why we’re here. The Gospel. The sword of the Word is a sword of freedom, striking off the chains of sin, and calling to the captives “Come!”

None of this matters without the Gospel. If Christ is not risen, if sin is not paid for, if we have not been reconciled to God, our preaching is in vain, our faith is in vain, and we are of all men most miserable. (1 Cor 15: 19)

If the cross didn’t matter, then why would we think anything else in life does?

But if the cross does matter, if it does make a difference, if suddenly the door is opened and light comes rushing in — why, why would we not shout, beg, tell, proclaim this good news to everyone we know?

O Grave where is your victory? O Death where is your sting? The strength of sin has been removed, and the song of the Lamb we sing.

And this is amazing, and awe-inspiring, and wonderful, and — terrifying. Because this is a heavy responsibility. Because this is my mission. Our mission. This grand gift, this ultimate story, the very thing that all of history has worked towards until He comes back — is in my hands? I’m more than likely to let it slip and fall on the ground! God has given me, has given us all, this responsibility? I’m not worthy, I can’t do this. Go talk to Billy Graham, or maybe Paul Washer or Voddie Baucham if you want someone younger. But not me.

And so we train. We prepare.  We learn from those who have trained longer with the Sword of the Spirit, and we train with it ourselves, searching out the meanings, the cross-references, and even pulling out the giant weight of Strong’s Concordance to investigate that Greek.

We study to shew ourselves approved, a workman that needeth not be ashamed, rightly dividing the word of truth. (2 Tim 2:15)

The Word of God is not a toy. But it is powerfully real. And it’s never the make-believe, mess-around things that mold us, that make us who we are. Only the real, the true, does that.

Don’t give up your sword. Let neither the grip of the enemy nor the fingers of laziness and ineptitude pry it away from you. No, but rather let this healthy fear, let this weight of the responsibility urge you on to master it. Let it become one with you in every sense, in your heart, in your mind, and in your tongue.

Let the high praises of God be in their mouth, and a two-edged sword in their hand. (Psalm 149:6) May that be said of us. May our mouths ever be full of the glory of our God, and may our hands be full of the Bible, to know Him more.

For whom shall we fear when we have the very Word and Sword of the Almighty on our side?

He that overcometh shall inherit all things; and I will be his God, and he shall be my son.(Rev 21:7)