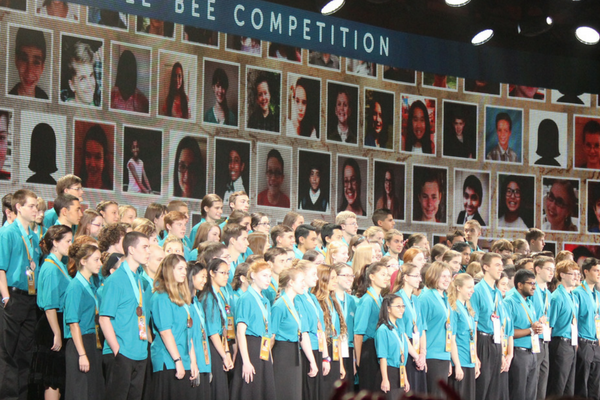 The first time I heard about The Rebelution was in 2009, at a hotel in Washington, D.C.

Alex and Brett Harris were speaking in the hotel’s main ballroom. They talked about low expectations, doing hard things, and Alex’s ability to recite supercalifragilisticexpialidocious backwards in Japanese.

But what exactly was this event? Why were three hundred kids and teenagers sitting in a hotel auditorium in the capital of the United States?

Because this was the first ever National Bible Bee competition, and we’d studied for months to get there.

Every summer, thousands of young people participate in the Bible Bee at the local level. They study a passage of the Bible and memorize a set of verses, and take an online test at the end of the summer. The top scorers go on to the national competition.

For Nationals, you memorize many more verses and study another book or passage of the Bible. At the national competition you’ll take another online test and recite in front of judges – and if you score highly enough, you might even compete in the onstage Semis and finals.

By God’s grace I’ve competed every year since that eventful first one, and 2016 was my sixth time at Nationals.

God’s used this competition to teach me so many things. Here are just a few of them.

1. God’s Word Will Change Your Life

That night in Washington, Brett said something that spoke directly to me – even at ten years old. “Some of you just want to walk out of here with a check.”

Then and there, I realized that was me. Although I’d been saved since I was five, I didn’t care (at least not much) about the towering eternal value of the words I was putting into my brain.

Nevertheless, I kept competing over the next few years. I kept learning and internalizing these vast portions of Scripture, although not always with the best motives.

But here’s the crazy thing – although I didn’t realize it at the time, over those summers and autumns, the Scripture was slowly but surely changing my heart.

I wanted to love God and His word with the same passion I saw in others, but couldn’t seem to find it. But through God’s word, I saw more and more clearly who He is. And slowly – very slowly – I started to love Him more and more.

We talk, sometimes, about losing the wonder we felt when we first believed. But I’d grown up surrounded by these truths, and they were as normal to me as breathing. I had to find the wonder first.

2013 was my third year at Nationals. I hoped for Semi-Finals. I dreamed of Finals. I definitely didn’t expect a first place trophy.

But the trophy was only – as my dad would say – the icing on the cake of that exciting, amazing year. 2013 was more of a beginning than an end.

You see, this was the first year where I clearly saw the fruits of that study in my life. Oh, they’d been there before; but this year I found myself actually enjoying and loving my study in a way I hadn’t. It was a turning point in my walk with Christ.

The trophy gathers dust on a makeshift shelf in my closet. The money will be long gone once I’m out of college. But the truth of God’s word will last through the expiration of my final breath and into eternity. (2 Corinthians 4:18)

In January, I participated in the National Bible Bee Game Show; in November, I went to Nationals again.

I’d made Semis in 2015, and I almost desperately wanted to again – both in the Game Show, and at Nationals.

Twice, I came in with high hopes and no good reason to fail.

Both times it was because of a stupid mistake that I would never have expected to make. But in God’s grace, both times He allowed me to see so clearly that it was His will. It was for His glory.

And both times, He was so faithful. We call it tough love sometimes – this killing of pride (which needed to happen for me!), this showing us that He is worth more than any ranking or prize.

The LORD’S lovingkindnesses indeed never cease, For His compassions never fail. They are new every morning; Great is Your faithfulness. (Lamentations 3:22-23)

These disappointments were never something I would have chosen. I had worked so hard, for so long, and for it all to fall apart because of one verse!

But God was faithful to use my life for His glory, and to draw me closer to Himself.

4. The Best Fellowship is Around God’s Word

One of my absolute favorite things about the Bible Bee is the many friends I’ve made through it.

Through the summer and fall we share study materials and insights over the internet. At Nationals, there are countless times of spontaneous prayer before rounds, impromptu singing while waiting in line, and deep conversations in crowded lobbies or outside hotel rooms. These people are some of the best friends I have.

Why? Because the foundation of our relationships is a shared pursuit of God’s truth.

If our relationships are rooted in a shared love of the gospel, then we really have something to talk about! It should become normal for us to ask each other how we’re doing spiritually, or what we’ve been reading in our Bibles lately. I’ll never forget the older teens from my church who took time to pour into my life and build me up in the gospel – those relationships impacted me like few others. (1 John 1:3)

5. Take On Challenges You Don’t Think You Can Accomplish

That very first year, memorizing all those hundreds of verses seemed unthinkable.

I looked at some of the older teenagers (or even other ten-year-olds!) and thought, How do they do that?

But now it’s possible for me to memorize 900 verses, and have them all word-perfect by the time Nationals comes around.

That didn’t happen over a few months. It took years of practice, a lot of failures, and a decent amount of frustration.

It also took a power greater than mine. I could never have done a thing like that on my own; it had to be a result of God’s grace and might. (2 Peter 1:3)

He alone gives the grace to do His will. Whatever your calling, whether it’s starting a ministry or going overseas or loving a pesky sibling, it it is possible – but only through God’s power.