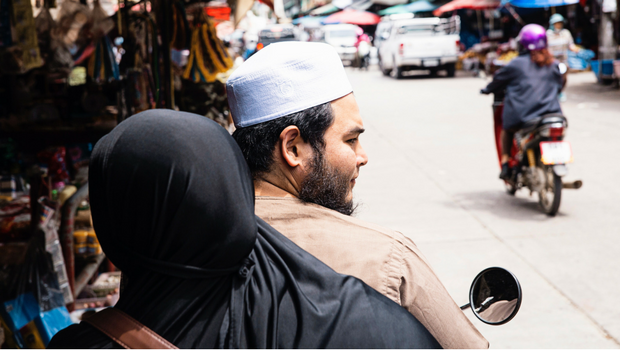 In the summer of 2015, I was on my second mission trip to Uganda.

We were on our way back to the U.S., and our first flight was from Uganda to Nairobi, Kenya. I remember getting on the small plane and noticing that my sister and I had seats farther away from the family we were traveling with.

But that wasn’t the part that scared me the most.

As we boarded, we realized that every one of the passengers that surrounded us was Muslim.

And I was terrified. I can’t remember being more scared in my life.

About two hours later, we were walking around in the Nairobi airport, and we walked past a group of Muslim men praying. They had their prayer rugs spread out, they were facing Mecca, and they were reciting their prayer.

When I witnessed this moment, I thought I was going to be sick to my stomach.

I did not feel sick from disgust, but because I realized they had never experienced the grace and forgiveness of Jesus that I have experienced. They had never been overwhelmed by God’s love. They didn’t have a secure future after death.

That’s what made me sick. My heart hurt for them.

It hit me like a ton of bricks, and instantly I was ashamed of the fear I’d felt just a few hours earlier.

My mindset of Muslims changed from fear to compassion and love. And I knew that I would never be the same.

Getting Rid of Stereotypes

Before this experience, I had my own stereotypes of Muslims. I soon learned that the thoughts I had towards Muslims were untrue and that other people also have the same mindset about Muslims that I once did.

God used that moment to teach me quite a few lessons about Muslims — and about myself — that I will never forget.

Even after a year and a half since the mission trip to Uganda, the experience in the Nairobi airport still haunted me.

I wanted to know more about Islam.

I wanted to understand the Muslim people.

I began reading books, researching and asking people who had worked with Muslims questions. Since then, I have learned a lot about the Muslim faith and those of the faith. God has brought a lot of misconceptions I had of Muslims to light, and I want to share these lessons with you.

We Are Not That Different

One of the first things that I learned about Muslim people is that they are not that different from us.

They are human beings. They have a heart that beats, eyes that see, and ears that hear. They inhale and exhale just like everyone else.

They have passions, dreams, fears, strengths, and weaknesses. They have a need for community and love just like we do. They have their sins and wrongdoings, just like the rest of us. And they need God and His mercy just as much as I do.

They are not foreigners who are better or worse than us. Their sins are not worse than ours, because all sin is deadly and destructive.

They are people just like you and me. They want to be successful, a fulfilling life, and a purpose. They are imperfect people, just like we are.

They Are Not All Terrorists

We all have heard the stories. We have seen the news. Stories and broadcasts of acts of terrorism all over the world. Ones like 9/11 and the attacks in England that happened a few months ago. These acts of terrorism were, or are believed to be done, by Muslims.

One of the main misunderstandings people have of Muslims is that all Muslims are terrorists.

Nothing could be further from the truth. Not all Muslims are terrorists.

I will be the first to admit that this is what I believed about Muslims. I had heard the stories of terrorist attacks, and I allowed myself to believe that all Muslims were out to destroy non-Muslims. But over time, I have seen that not all Muslims are like that.

Some, if not most, of the Muslims around the world today live pretty regular lifestyles. They have jobs and they take care of their families. They try to honor Allah with their lives.

What Christian Teens Can Do

You might be reading this article and thinking, “Great, but what am I supposed to do now?”

The first thing you can do is pray. There is nothing more powerful than prayer. I once heard that prayer is the rail on which God’s train travels. That prayer is what unlocks the spiritual into the physical.

Never underestimate prayer. Pray for Muslims, that God would work and that they will come to Christ.

The second action you can take is to simply love.

If you are ever around Muslims, be a light. Show God’s love to them. Love them the way God loves, fully and fearlessly. It is impossible to introduce and represent God without love.

First Corinthians 13:1 says, “If I could speak all the languages of earth and of angels, but didn’t love others, I would only be a noisy gong or a clanging cymbal.”

There are many ways to reach Muslims; it just depends on your personality is and what gifts God gave you.

There are Christians who teach/reach out to Muslims through social media, long-term personal relationships, street outreaches, debates, arguments, writing, testimonies, and so much more.

As I said before, the way that you could minister to Muslims depends on your personality, the way you love others, and what you are good at.

Lastly, learn more about the Muslim culture. Research, read books, listen to stories, ask questions. By doing this, you are making an effort to understand Islam, the people, and their way of life.

God is working, and He is inviting us, the Church, to be a part of it. My challenge for you, Church, is this:

Keep on praying and keep on loving. Don’t stop.