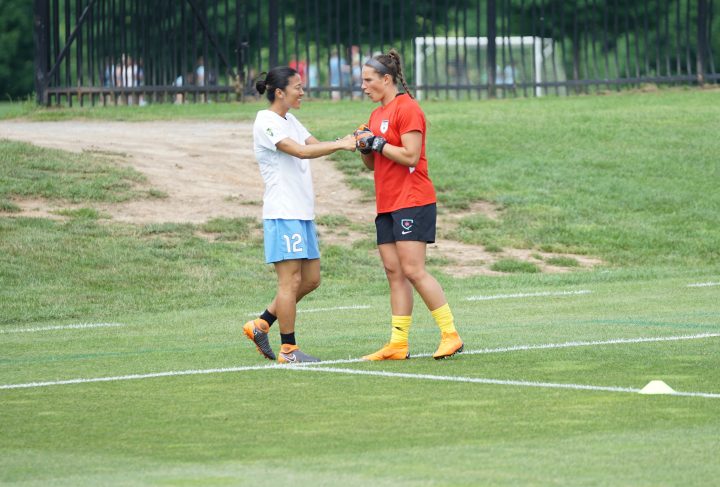 How can I share my faith while engaging in extracurricular activities?

For the majority of my life, I have been blessed to participate in several extracurricular activities. Lately, I’ve been thinking about something: How can I show people the light of Christ while engaging in these activities?

This is a question that should be at the forefront of every Christian’s mind. It’s so easy to get caught up in extracurricular activities that we don’t even think about the importance of showing the light of Christ in everything we do.

Here are four ways I’ve discovered to show my love for Christ during extracurricular activities.

1. Don’t be afraid to stand up for what you believe

I began to take dance lessons when I was three years old. Ever since that young age, I’ve enjoyed the fine art of dance, such as ballet, tap, and jazz.

The dance studio I attended five years ago used to be a Christian studio. A couple of years ago, however, a new owner took over and deliberately removed the word “Christian” from the studio’s name, presumably to attract a larger and more diverse group of girls.

This change certainly had the desired effect. Class sizes rapidly grew as girls flooded into the studio. While larger classes were fun and exciting, I soon noticed that other changes had taken place as well. Before, our small classes were composed mostly of girls who professed to be Christians, and behaved accordingly. Now, however, I was surrounded by girls who didn’t hesitate to use God’s name in vain.

I also began to see a change in values about what music was chosen to accompany the dance.

One evening, a substitute teacher came to teach the class. At the beginning of class, she cued up a song in order to lead us through a warm up. Before she played the song, however, she warned us there was going to be some profane language, and she would “bleep” it out.

The statement made me pause…was she really going to play a song she knew had bad language in it?

The song began, and we started to go through the warm ups. Sure enough, thirty seconds later, I heard the teacher say, “Oops, bleep!” Then she went on with the class as though nothing had happened. The other students laughed and didn’t mind at all.

I didn’t even hear the word, but I felt so uncomfortable being around the substitute teacher and my classmates that I ran upstairs crying. My younger sister was reading, but she looked up when I came in and asked what was wrong. Through my tears, I told her what had happened.

“They’re playing a bad song down there,” I said. “I can’t dance to it!” She was about to go downstairs and tell the teacher, but I stopped her. I didn’t want to make a big deal out of it. I didn’t want everyone to know I was crying. “I’ll be fine,” I told her, trying to calm myself down.

A minute or so later, the teacher came up. Concerned, she asked me what was wrong. My sister told her, “We’re Christians, and we can’t listen to that kind of music.”

The teacher felt really bad and apologized to me more than once. I said I was fine, and she soon went back downstairs. Eventually, I dried my eyes and went downstairs to continue the class.

As this incident reminded me, we live in a secular culture, and we won’t always be around people who hold the same beliefs we do. However, while we live in this world, Christ calls us to be a light to those around us (Matthew 5:16).

I’m glad my sister and I stood up for what we believed. Who knows? Maybe the teacher will remember that experience and think more seriously about the music she listens to and plays for students in the studio.

For the past five years, I have had the opportunity to play volleyball with a Christian team whose focus is to glorify God in all we do, even when we are playing sports. Our coach has impressed on us how our attitude while we play can either add to or detract from our witness.

A few years ago, we were playing a volleyball game and had just won the point, when a girl from the other team slammed the ball on the ground in frustration. This outburst was such a blatant display of unsportmanslike behavior that the referee called her off the court to reprimand her for her conduct.

This experience reminded me how important it is to have a good attitude, even during a disappointing game, and how bad sportsmanship reflects on our Christian witness as players.

Maintaining a positive attitude is so important in sports. It not only changes the way we play, but it also shows our teammates that we’re different. It can even lead to conversations about spiritual topics.

After my friend went to one of our games, she told me she noticed a difference between our team and our opponents. It was so encouraging because that is our goal—to shine and stand out so that other people notice the difference in our team. We want people to notice him in us.

If you’re not part of a team with that common goal, you can still be a light to those on your own team. You can be the one who is different. People notice those who stand out from the crowd. You could plant a seed in your teammate’s heart, and maybe one day it will grow. Pray for them. Pray that they will see the light and come to know Jesus as their personal Lord and Savior.

3. Pray with with the people around you

One time, we played a volleyball game at a public school. Afterward, we asked the coach if he and his team would like to pray with us. The coach hesitated, then agreed.

It was so neat to see players from a public school, where God is frowned upon, agree to pray with us!

I love it every time I grasp the hands of the other team’s girls while we pray to our Lord. Whether we win or lose, we like to ask the other coach and his or her team if they’d like to pray with us. We alternate players so each of us are holding hands with the other team. Since we’re the ones who invited the team to pray with us, usually a member of my team will pray aloud. Then we part with a hearty “Good game!” or “Great job!”

This might sound intimidating, and it might mean stepping out of your comfort zone to pray with the people around you. But think how it could change their lives! If you could show one person the love of Christ, wouldn’t it be worth it? Maybe God is calling you to help that person and shine his light.

This might sound intimidating, and it might mean stepping out of your comfort zone to pray with the people around you. But think how it could change their lives! If you could show one person the love of Christ, wouldn’t it be worth… Click To Tweet

Actually, we are called to do this (Matthew 5:16). We are called to be different and shine the light of Jesus, even if that means stepping out of our comfort zones. Let God use you in your extracurricular activities as a witness for him.

Our recent state volleyball tournament looked almost hopeless for my team. Yes, we had made it to the championship game, but the other team was so good!

The game was coming to a close, and we desperately wanted to win the game for which we had fought so hard. However, we decided to trust God with the outcome. Whether we won or lost, we would praise him who had brought us this far. In the end, my team won the state volleyball championship for junior varsity.

It’s so easy to forget that God is the one who gives us victory over our opponents. After every game my team wins, I’m really excited and proud of how hard we played. However, no matter how hard we push, it is God who allows us to win. We didn’t—and couldn’t—have won the state championship on our own if God had not allowed it.

It’s so easy to forget that God is the one who gives us victory over our opponents. However, no matter how hard we push, it is God who allows us to win. Click To Tweet

Remember to remain humble and to always give the glory to God, for he is the one who deserves it.

So what about you? How will you share your love for Christ during your activities this year? How will you choose to be different?