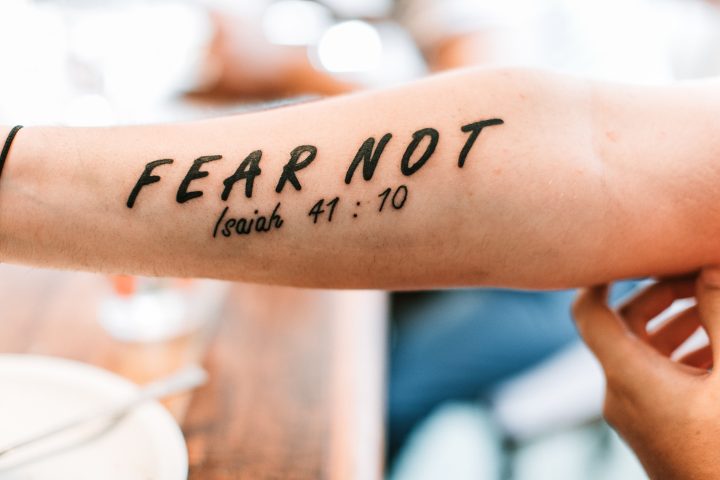 It’s that time of year again, time for the low-grade heresies. They appear everywhere: in your mailbox, in your inbox, and even underneath that Instagram picture box. They’re unavoidable. If you are a teen, have a friend who has teens, or even are on the internet, you’ve seen them. Now perhaps I’m not quite being fair, perhaps heresy is too strong a word, but nonetheless, these things still don’t really listen to what God’s Word really says.

What am I talking about? The graduation announcements that go out, or more truly—the verses that go on top of them.

Of course, there’s nothing wrong with announcing your graduation, and much less with wanting Scripture to have a place in it, and to show the importance of God in your life. Speaking Scripture and placing it center stage in our life is something we should all try to do more often.

Yet despite all their swirling fonts, smiling faces, and best intentions, these graduation-verses can often end up accidentally ignoring what the Bible really says. The simple fact that these cards include God’s Word isn’t wrong. It’s how they use it

Jeremiah 29:11 and The Promises We Claim

Consider the most common of these verses, Jeremiah 29:11. “For I know the plans I have for you, declares the LORD, plans for peace, and not for evil, to give you a future and a hope.” It’s the proof-text verse for every graduation announcement. You’ll get a dozen copies of it from cards in the mail, and see it again another dozen times as well-meaning grandmothers comment this verse on your cap-throwing pictures on Facebook.

And this verse seems to be a perfect fit for us. After all, we all want this promise. We want God to guide our lives, and to be assured that he has good plans for us, plans for our welfare and peace. This verse tells us that if we’re following God, he has a plan for our life that is good. And that seems right. After all, God is the one speaking. He’s the one promising it. And he’s promising it to us.

But what if I told you that this promise isn’t for you?

At least, not directly.

Not All of God’s Promises are For You

The Bible does have many promises for us, yes. It shows us how to live and what God has declared and how we should respond to him. The Bible does have a lot for us specifically. But not all of it. You see, the Bible isn’t our to-do list, or personalized life manual, or custom-tailored instructions. There’s no NIV—New Isabelle’s Version, nor an abbreviation that fits your name.

The Bible is one big story, but it’s not about us. It’s about God. It’s about God, and how he has progressively revealed himself throughout time to different people to accomplish his ultimate purpose. So sometimes there are things in there that don’t specifically have to do with us.

It’s about God, and how he has progressively revealed himself throughout time to different people to accomplish his ultimate purpose. Click To Tweet

Jeremiah 29:11 And The Promise Actually Made

If we read all of Jeremiah 29, we see that it a letter to the Israelites who are in exile in Babylon. The nation had repeatedly disobeyed and flaunted God, and so as an act of his judgment, the Babylonians had destroyed Jerusalem and carried many people far away. In this chapter, God tells the Israelites to build houses and pray for the peace of the land they are now in–because they’ll be there for a while.

In verse 10 God encourages them that he has not forgotten, and gives a time limit for their exile. In 70 years, they will return to the Promise Land. Jeremiah 29:11 is truly a continuing part of that promise, the promise that God plans to bring them back into the land of Israel. They won’t be destroyed or assimilated as so many other nations would be. God would keep his promise. Exile hadn’t nullified it; captivity hadn’t ruined it. Israel may have been in “time out” for their sin, but God doesn’t want them to think that he has forgotten his word or cast them off completely.

This promise of Jeremiah 29:11 doesn’t specifically apply to us. It has nothing to do with graduation. It has to do with God reminding his exiled people that He has a plan to maintain them to maintain his Word to their fathers.

ANYONE ORDER A PROMISE?

So how do we know which is which? When do promises apply to us, or to someone else? Do any of the promises in the Bible apply to us? After all, Jesus is never directly speaking to us—we weren’t even born. There are two things to remember. First, that context is key, and to consider what has changed. When we look at Jeremiah 29:11, we see how in its context, this is God speaking to a specific people with a time-specific promise. He has promised these people that the land of Israel will be theirs, and that a descendent of David will sit on the throne, and now he’s promising them that he will work that out.

Does that promise apply to us? Not really, because we don’t have much similar to them. We’re not literally in exile from the land that God has directly promised us. We’re (most likely) not of the Israelite people, we’re not the receptors of nor under that covenant promise, and we’re not of the original audience.

But what about verse like Matthew 28:20, where Jesus tells his disciples that he is “with you always”? The context here shows that Jesus is sending his disciples out into all the world, and promising his presence. Does this promise have any bearing on us? Yes, because it is a more general promise, and we are similar. We’re followers of Jesus. His command to go disciple all the world is for us too. So his promise of presence applies as well. The same Jesus that loved the Twelve enough to be with them loves us that much too.

The Promise Might Not Be For You, But the Principle Is

Yes, Jeremiah 29:11 doesn’t directly apply to graduates. We can’t claim that promise specifically for our lives. But the principals of it still hold true. God is sovereign over all—over time, history, and each of the events in our lives. He directs all of history and our lives according to his plan. And he is good. So his plan must be good too.

And the rest of Scripture, even ones far removed from Isaiah, or promised to different people, echo this truth. “He who began a good work in you will bring it to completion at the day of Jesus Christ” (Philippians 1:6) “that you may stand mature and fully assured in all the will of God.” (Col 4:12). “And we know that for those who love God all things work together for good” (Romans 8:28).

Now that doesn’t mean all of life will go well, nor that we’ll think God’s plan is good according to our ideas and standards. Just ask Jim Elliot, Corrie Ten Boom, or Dietrich Bonhoeffer. Ask those who have suffered, or seen very little fruit. God’s plans are often far different from what ours would be, or what we would consider good. But his plans are ultimately good, for they lead us to him, the only true Good.

So I’m not saying you can’t put Jeremiah 29:11 on your graduation announcement. And I’m certainly not saying you can call people heretics who do. (It’s called exaggeration to make a point; misappropriating a verse this innocently comes nowhere near heresy. I’ve done it myself more often than I can count.)

But we need to be careful when we claim the promises of God, that we aren’t reading a single verse out of context and ignoring who it’s exactly for. Whether or not we like a verse doesn’t mean that its promise is for us. Not all of God’s promises are. But all of God’s promises do point back to his character, and his character does pertain to all of life. Though he hasn’t given us every promise, he is a good father, who has promised us everything (1 Corinthians 3:21-23).

So next time you receive a card with some low-grade heresy, smile, and remember that though not all of God’s promises are given for us, he did fulfill his promise to give himself for us.