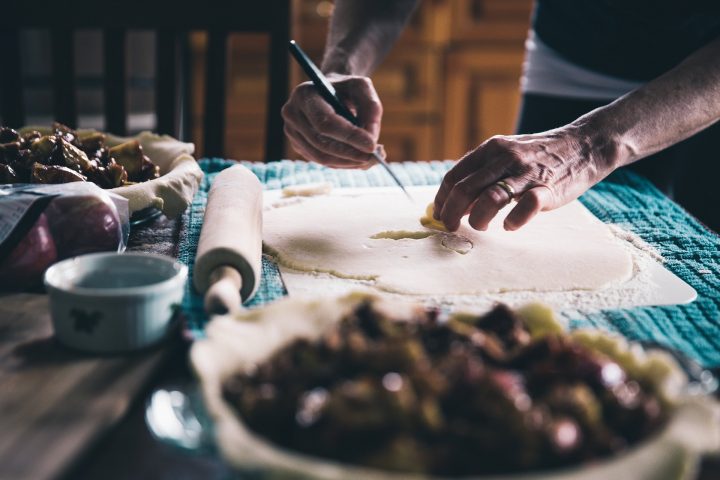 Now there is a reason for that and the reason is simply this: I’m bad at it. Like really, really bad at it.

I knew this when I decided it would be a fantastic idea to try making a homemade pecan pie. After all, what could go wrong?

I mean, the recipe I found didn’t look that hard. All I really had to do was follow the directions. So that’s exactly what I set out to do.

I mixed my filling together excitedly and slowly stirred in all the pecans. Everything was going great so far. Then I reached for the frozen pie crust and noticed that it was sitting in a tin foil pan, and I wasn’t sure what to do with that. Assuming it probably didn’t matter, I opted to take the pie crust out of the foil pan and just place it on a baking sheet after I poured the filling in. I figured if anything spilled over, at least the baking sheet would be there to catch it. (I am aware that this was not my smartest moment ever.)

Let me assure you—there is a purpose for that foil pan the pie crust comes in. And you should always, always leave the crust in the pan.

My perfect pecan pie had probably only been baking about five minutes when I turned on the oven light to reveal disaster. Cue my panicked gasp and rush to pull the pie out of the oven.

The crust appeared to have melted and completely flattened, allowing all of the filling to spill out. Without the foil pan holding the crust in place, it wasn’t going to be able to stand firm in the heat of the oven while it cooked.

Unfortunately that is the end of my sad pecan pie story, as I have decided that next time I will simply go to the grocery store and pick one up. However, as I stared at the gooey mess of filling and melted crust, I also realized that I could learn something from this pecan pie. You know, something besides the lesson that I shouldn’t be left to bake alone.

I learned that sometimes in life I place my focus in the wrong places.

And when I place my focus in the wrong places, I lose sight of what matters most.

You see, I became so focused on perfecting my pie filling that I neglected the crust, which was the most important part. Without the crust being taken care of properly, everything else inside was going to fall apart.

Sometimes I do that with God. And I’m not the only one.

The story of Mary and Martha is a popular one and I have read it over and over again. We can find it tucked between the text of Luke 10:38-42. If you’re not familiar with the story, allow me to recap it for you.

Meanwhile, Mary sat at the feet of Jesus and chose to just be with him. She knew she could serve him later, but for now her focus needed to be in the right place–simply being with him.

This irritated Martha because she was already worried and stressed out. When our focus is in the wrong place at the wrong time, worry and stress abound.

What did Jesus tell her? He gently reminded her that she had her focus in the wrong place and that indeed the only thing she needed to focus on at that moment was exactly what Mary was doing. Serving him is important, but she had it mixed up in the wrong place, because she allowed her work to come before her Savior.

I mix it all up too. I mix up my priorities and I mix up my focus. Just like I did with my pecan pie.

Next time I become more focused on other things and lose sight of what matters most, I’m going to remember what I learned from failing at pecan pie.

And I’m going to remember that if my focus is on my relationship with Jesus, he is going to hold everything else in place. I hope this can help you remember too.

Don’t miss what matters most.