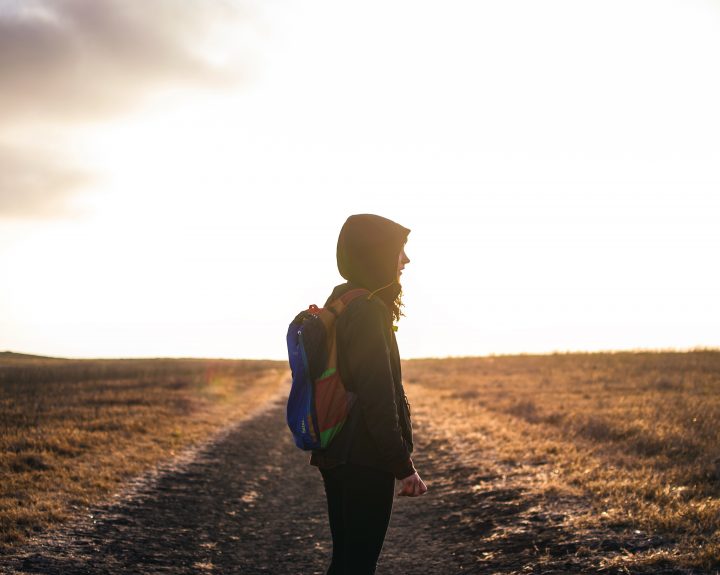 Editors Note: Today we’re celebrating the one-year anniversary of The Rebelution’s latest book Love Riot: A Teenage Call to Live With Relentless Abandon for Christ! Below is one of our favorite excerpts from Love Riot taken from Chapter 6: Everything Means Everything.

Jim Elliot could have done anything he wanted.

Well-liked and respected among his fellow college students, he was handsome and talented, with a sharp sense of humor and a flair for drama. As well as being one of the best wrestlers on campus, he had a gift for acting and public speaking. His unconventional opinions—and boldness in stating them—coupled with his incredible oratory skills, made him particularly unforgettable. You couldn’t know Jim Elliot and not recognize that there was something distinctly different about this college student from Oregon.

Yet none of that mattered to Jim. He had one goal in life. One purpose.

To live for Christ and bring Him glory.

Jim’s dream was to go to Ecuador and share the gospel. Again, his purpose was resolute and his goal simple: to glorify God and share Jesus Christ.

And he was willing to give anything to see that goal accomplished. “God, I pray Thee,” Jim wrote in his journal in 1948. “Light these idle sticks of my life and may I burn for Thee. Consume my life, my God, for it is Thine. I seek not a long life, but a full one, like you, Lord Jesus.”

After planning, dreaming, and experiencing delay upon delay, Jim finally embarked on his life’s mission, sailing for Ecuador on February 4, 1952. He was twenty-five years old.

After spending five months in Quito, the capital of Ecuador, learning the language, and staying with local missionaries, he headed to the mission station at Shandia, a small village in the middle of the rain forest. But Jim had one more audacious desire—to go where the gospel had never been proclaimed, to a people never before reached. To the Huaorani tribe, also known as the Auca Indians, an infamously violent people group, deep in the heart of the Ecuadorian jungle. Jim once said, “The will of God is always a bigger thing than we bargain for.” In the case of attempting to reach the Huaorani people with the love of Christ, that couldn’t have been more true.

After years of preparing, learning as much of the Huaorani language as possible, and attempting to befriend the tribe by dropping gifts by airplane, it was time to embark on Operation Auca.

Jim and four other young men— Nate Saint, Ed McCully, Pete Fleming, and Roger Youderian—decided it was time to meet face-to-face with the Huaorani people. They knew the risks. No outsider was welcome in Huaorani territory. But their love for the gospel was too great to give up an opportunity to share it. Jim told his wife, Elisabeth, before leaving, “If God wants it that way . . . I am ready to die for the salvation of the Aucas.”

On Monday, January 2, 1956, the five men departed, unsure of what they would encounter, but with a fire for God in their hearts. By Friday, “the thrill of Jim’s lifetime was given. He took an Auca by the hand.” Elisabeth later wrote, recounting the experience, “Two days later, on Sunday, January 8, 1956, the men for whom Jim Elliot had prayed for six years killed him and his four companions.”

Elisabeth wrote in Jim’s biography, “Jim’s aim was to know God. His course, obedience—the only course that could lead to the fulfillment of that aim. His end was what some would call an extraordinary death, although in facing death he had quietly pointed out that many have died because of obedience to God . . . Is the distinction between living for Christ and dying for Him, after all, so great? Is not the second the logical conclusion of the first? Furthermore, to live for God is to die, “daily,” as the apostle Paul put it. It is to lose everything that we may gain Christ. It is in thus laying down our lives that we find them.”

And for Jim, Nate, Ed, Pete, and Roger, there was no greater privilege than to lay down their lives for something far greater. After all, it was Jim who famously wrote, “He is no fool who gives that which he cannot keep to gain what he cannot lose.”

Indeed, they gave all.

But maybe, despite their sacrifice, they gained more.

Do You Love Enough to Give Everything?

Jim Elliot is one of my heroes. Everything about his life challenges and inspires me. The way he died, yes, but even more the way he lived. Committed. Surrendered. Sold out. He gave up his time to serve God. He gave up his resources and energy to share the gospel. For five long and hard years, Jim even postponed marrying his love, Elisabeth, because he felt God calling him to live as a single missionary. He truly had one goal: to obey God and share the love of Christ. Anything hindering that goal, he was willing to sacrifice.

Reading through his journals and prayers, I wonder, Would I be willing to give up so much? Do I love Jesus like that? Do I love Him enough to give everything?

I pray I do. But I know I fail. Jesus commanded radical obedience in Mark 8:34–37, when He said, “Whoever desires to come after Me, let him deny himself, and take up his cross, and follow Me. For whoever desires to save his life will lose it, but whoever loses his life for my sake and the gospel’s will save it. For what will it profit a man if he gains the whole world and loses his own soul? Or what will a man give in exchange for his soul?”

This shows me that there’s no such thing as a complacent follower of Christ. You’re either following Him or you aren’t. You’re either living for yourself or living for God. There are no “sort of” followers of Christ. There is no in-between. Not every follower of Jesus is called to physically die for Him. But we are all called to die to ourselves—to our sin and old way of living. Paul wrote, “I have been crucified with Christ; it is no longer I who live, but Christ lives in me” (Gal. 2:20).

We often settle for going halfway with God. I know I have more times than I care to remember. We think, Okay, God, you can have this part of my life, and that area, but don’t you dare mess with these other things. Don’t ask me to change this or give up that. We hold on to sinful patterns and old habits. We’re stubborn and fiercely rebellious.

I recently read an article that transformed my perspective on surrender. In it, the author wrote, “We look at Jesus and say, ‘Lord, there’s nothing I won’t do for You. I will die for You!’ But I think Jesus is responding by pointing to places in our lives and saying, ‘Yes, you are willing to die for me . . . but are you willing to let this thing die in you?’ . . . At the same instant that we are shouting, ‘God, I want more of You!’ He is looking back and saying, ‘No, I want more of you!’”

Take a minute and think about it. Can you think of any areas in your life you’ve been afraid to give to God? Afraid of what He’ll do or how He’ll ask you to change? Afraid if you allow Him to be Lord of everything, maybe He’ll take away something you love?

You’re not alone. I’m often afraid what He’ll ask me to give up.

My dreams? My writing? My hopes for a husband and family of my own?

I’m afraid what He’ll ask me to do.

Move away? Become a missionary? Give up my life?

I’ve been terrified of opening my hands wide and relinquishing my fears and dreams. I’ve thought deep in my heart, If I surrender this, He’ll take it from me. I need to hold on tightly.

But you see, neither of those things are true. We can’t hold on, no matter how tightly we grip. God doesn’t ask us to surrender to be unkind or exert His power. If He asks us to give something up, He does so with love. He knows it’s hindering us from a closer relationship with Himself, is a sin in our lives, or is keeping us from something better. God won’t take our surrender and throw it back in our faces.

Surrender and sacrifice are good, because God is good.

In Luke 14, Jesus told two parables—one about a builder, the other about a king. In the first parable, the builder was working on a tower, but he didn’t figure out how much it would cost and was only able to lay the foundation.

The second parable tells the story of a king who was going to war, but he didn’t count on the size of his rival’s army and, in order to spare his vastly outnumbered men, had to ask for conditions of peace before the battle even began.

What builder doesn’t calculate the cost of the tower he intends to construct before he begins? Likewise, what king goes to war without considering the might of his enemy? The message in both examples?

Count the price that needs to be paid before you start, or you risk not being able to finish. Following Jesus comes with a cost. There’s always a price to be paid. Sometimes the cost is great—it could be your life. Other times smaller, but no less important, things must be offered.

Sound radical? Listen to Jesus’s own words: “So likewise, whoever of you does not forsake all that he has cannot be My disciple” (Luke 14:33).

Let me ask again. What is He calling you to surrender?

To be honest, I don’t have this figured out. I don’t say these things as if they’re easy. They’re not. I struggle daily.

But I’m so thankful that Jesus is continually sanctifying me, convicting me, offering grace upon grace. I pray I’m more surrendered today than I was yesterday. And hopefully tomorrow I’ll be more surrendered than I am today.

But even more, I pray He sees in me, despite my flaws and failings, a heart that says, “Yes, Lord. I surrender.”

We can give everything, because God is everything.

It’s time to count the cost. 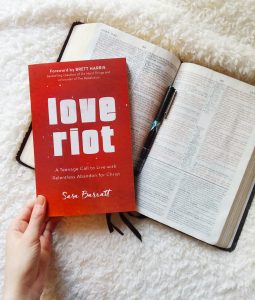 Can you believe Love Riot has been out for a year? If you haven’t grabbed a copy yet (and want more practical encouragement on living for sold-out for Jesus) pick up your copy today from any online retailer such as Amazon, ChristianBook.com, or Barnes and Noble. 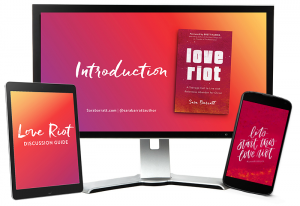 Find out more about Love Riot here as well as snag a free Love Riot Leader’s Guide and video series.

If you’ve read Love Riot, comment below what you learned from it and share this post with a friend! What was your favorite chapter? How did it help you grow closer to Jesus?