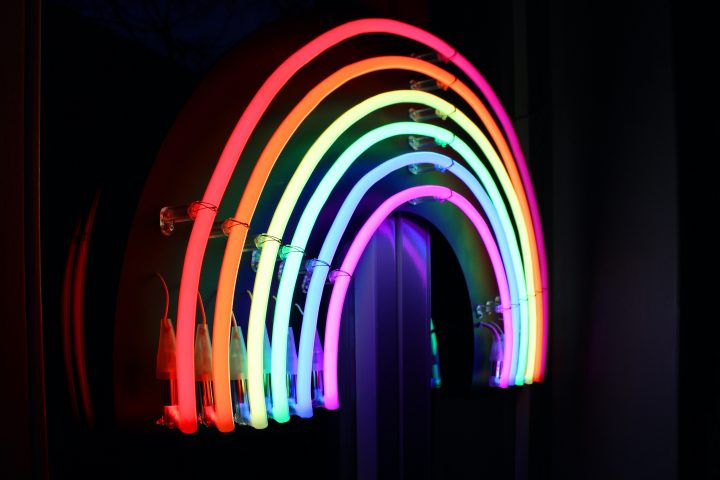 I drove past a rainbow on my way home yesterday.

Stripes of color fluttered in the breeze, the flag displayed in my neighbor’s front yard more proclamation than decoration. It’s interesting how a simple piece of fabric woven with a certain pattern of color can make such a bold statement. It’s a symbol of solidarity and inclusion. Of embracing one’s “true self” without shame or reservation.

It’s a symbol of Pride.

June is National Pride Month. Every year, the beginning of June marks a month-long celebration of LGBT+ rights. It’s a month where society is encouraged to learn about the struggle of the LGBT+ community and grow in awareness and acceptance and where members of the LGBT+ community can embrace and celebrate their sexuality.

I’m sure you, like me, have seen countless flags, social media posts, articles, headlines, and ads all celebrating Pride month. It’s a month the majority of culture can easily applaud and join in celebrating, even if they don’t personally identify as LGBT+.

But what about Christians? Is Pride month something Christians should celebrate?

How Should Christians Respond to Pride Month?

How do you respond when your school sets aside a day to celebrate the LGBT+ community? What do you do when your city has a Pride parade? How do you react to your neighbor who waves a rainbow flag in their yard?

Should you applaud it? Ignore it? Condemn it? Confront it?

The possibilities of responses are numerous. Some Christians openly approve of the LGBT+ lifestyle and claim that God accepts and approves of all sexual expression. Other Christians vocally condemn those who experience same-sex attraction or gender confusion. Many awkwardly ignore the issue and hope it doesn’t come up in a personal situation.

But how should we respond?

Before we can get our responses right, we need to get our theology right. Before we can dive into how to respond to Pride month, we need to consider what God says about homosexuality, gender confusion, and every other letter on the ever-growing acronym.

So let’s start there.

What does God say about Gender?

Rewinding to the opening acts of the world in the beginning of Genesis, we get a front-row seat to God’s creation of humanity. “Let us make man in Our image,” God said. (Genesis 1:26) And so He did. “God created man in His own image; in the image of God He created them; male and female He created them.” (Genesis 1:27)

The creation of humanity was divinely marked by the distinction of gender. “Male and female He created them” doesn’t infer that He created us to be both a little bit male and a little bit female or that there’s a gender spectrum we slide down to determine if we’re male, female, or both. Rather these words clearly define that when God created humanity, He created us to be gendered beings. Gender was not a social construct, but God’s intentional design. He created two distinct genders that are not interchangeable or fluid. Instead, gender is designed by God and given by God.

What does God say about Sexuality?

Why did God create gender in the first place? Moving along in the story of creation, we see one reason why. God created us to be gendered so we could display sexuality.

When God created Adam (Genesis 2:7), Adam’s design was fully male. His gender and sexuality were complete in God’s design, but lacking because he couldn’t express them as God’s design intended. So God created a counterpart for Adam called woman. Like Adam, Eve was designed with a distinct gender, hers uniquely feminine and the opposite of Adam’s masculinity. The distinction of their genders allowed them to express their sexuality. When God brought Eve to Adam, he rejoiced and said, “This is now bone of my bones and flesh of my flesh; she shall be called woman, because she was taken out of man. Therefore a man shall leave his father and mother and be joined to his wife and they shall become one flesh.”

What does “one flesh” mean? Well, to put it bluntly, a huge component of what it means to be “one flesh” is sexual union. Adam moves along the natural progression of acknowledging the existence of two distinct genders to what masculinity plus femininity can accomplish—sexual expression.

This picture in the creation story writes the script for sexuality throughout every generation. Sexual expression in the beginning was made possible through the creation of two different genders and designed to remain solely as an experience between those two genders.

What does God say about Marriage?

The next piece in our theological puzzle is labeled marriage. We know God’s design for gender. We know how those genders are meant to relate sexually. But who can act this out? Can any man and woman regardless of relationship status or commitment experience sexual intimacy? Can you experience it with more than one person?

When God designed our sexuality, He put in place a context for that sexuality to flourish. We call that context marriage. In the first marriage on earth, God sets the standard, “Therefore a man shall leave his father and mother and be joined to his wife, and the two shall become one flesh.” A covenant, committed relationship (described here by leaving and joining) comes first, and then the sexual expression (becoming one flesh) follows. The rest of Scripture affirms this truth from Jesus’s words in Matthew 19 to Paul’s instructions on marriage in Ephesians 5 and 1 Corinthians 7. Any sexual action outside of the covenant of marriage is described as “sexual immorality” (1 Corinthians 6:18) and marriage is the only place where sexual activity is permitted.

But What about the LGBT+ Community?

If these conclusions about gender and sex are true, how do you explain the presence of same-sex attraction and gender confusion?

When God created the world, it was perfect and harmonious. But sin entered the scene and the perfection shattered. Our bodies became broken. Our desires became distorted. And yes, our sexuality was damaged as well.

Romans 8:20 offers this insight, “For the creation was subjected to futility, not willingly, but because of him who subjected it, in hope that the creation itself will be set free from its bondage to corruption and obtain the freedom of the glory of the children of God.”

Our world has been subjected to futility. It’s broken and messed up. We see it all around us—in hatred and injustice, in sickness and disease, in tragedies and natural disasters. If we can easily acknowledge that something is wrong with the world by pointing to these things, then why is it difficult to believe that the brokenness which affects our social life, relationships, and even the natural world around us, also affects our sexuality? Because we live in a fallen world, we experience fallen sexual desires, broken emotions regarding our gender, and confusing feelings about our sexual design.

So should we celebrate Pride Month?

Now we come to Pride month. Should we participate in it? Should we celebrate the LGBT+ community?

So if we don’t celebrate, how should we respond?

I believe that answer can be boiled down into two words: with truth and with love.

Everywhere we turn, we’re being fed the LGBT+ agenda—homosexuality is normal, gender is fluid, obeying your emotions and being your “true self” is heroic. As followers of Jesus, we bow to a higher truth than the subjective truths of our emotions and desires. This truth transforms how we view sexuality and it’s critical to remain steadfastly committed to God’s truth no matter what culture promotes.

It shouldn’t surprise us that the world defies this truth and sets out to blaze its own path of inclusivity and acceptance. The world will always do what the world has always done—rebel against God. But what should deeply concern us is when God’s people turn from His truth and dilute it with lies. The more these messages become ingrained in our culture, the stronger the pressure will grow to conform. But conforming to anything outside of God’s standards is not an option for the faithful. When it comes to Pride month and the saturation of the LGBT+ agenda, we must ensure that we’re not allowing the perspectives of the world to muddy up the truth of God’s Word.

A second aspect of responding with truth is being faithful witnesses of the truth. If our non-Christian friends, family members, co-workers, or neighbors ask us our perspectives on Pride month, truth should be the answer we share, even if it’s not an answer they agree with. If we boldly share why we won’t participate in the Pride celebrations at our schools, workplaces, or communities, our explanation should be grounded in God’s Word.

That leads to our second response: love.

Christians are often called homophobes, bigots, or haters because of our convictions on God’s design for marriage and sex. At times these labels have fit as people have forgotten Christ’s example of truth given in love and let hatred and bias fuel their actions. Promoting truth with an attitude of hate is just as sinful as promoting lies. Let the world call us what they want for our beliefs, but let no one have any ammunition against us for our actions.

Instead, may we remember the mind-blowing reality that all people are defined not by the brokenness of their humanity, but by the Imago Dei truth that we are all made in the image of God. From the teen struggling with gender dysphoria, to the man living an openly homosexual lifestyle, to the woman wrestling with lesbian lust, all are pricelessly valuable to the God who created them intentionally and loves them infinitely.

That love—the love that longs to pursue, mend, and restore each and every heart and soul—is the love we’re called to display in our lives.

Let Pride month be your opportunity to love your LGBT+ neighbors, co-workers, and friends. Let it be your open door to share the gospel with them, pray for them, and point them to the Savior who died for them.

The LGBT+ community is desperate for the hope of Jesus. 52 percent of LGBT individuals regularly experience depression and 40 percent of LGBT+ youth have contemplated suicide within the last year. I can think of no movement hungrier for love, acceptance, and affirmation.

True, lasting, and satisfying love can never be found in the fulfillment of a lust, gratification of a desire, or even acceptance of our “true selves.” It always comes up empty. The love, acceptance, and affirmation every soul craves can only be found in Jesus Christ.

With every reminder of Pride this month—every flag we drive by, every social media post we scroll past, every advertisement we see—may it stir our hearts to pray for transformation and a revival of truth, to faithfully proclaim God’s uncompromising standards, and to love the broken, confused, deceived, and hurting with Christ’s blood-bought love.

For More Resources, Check Out:

What Would You Say? LGBTQ+ video playlist

Is God Anti-Gay? by Sam Allberry

Gender Ideology: What Do Christians Need to Know? by Sharon James