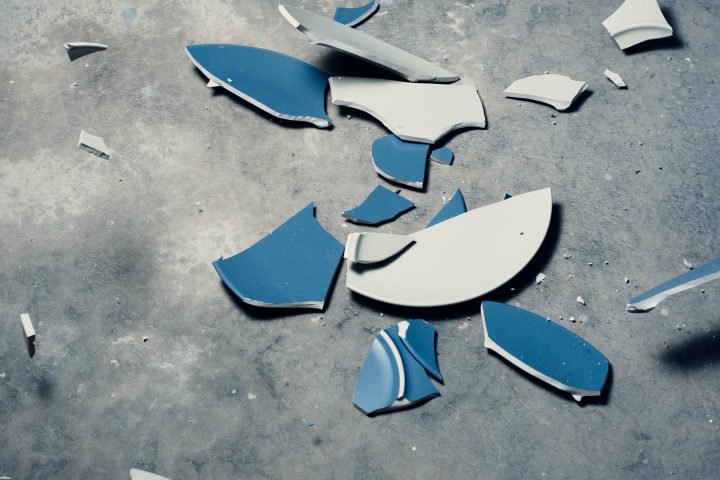 The world is ripe with brokenness.

Natural disasters rage, conflicts ensue, and bitterness stirs within. Death is rampant and suffering is widespread. Around 690 million people go to bed hungry every night, and approximately 150,000 people die daily. Fifty percent of marriages end in divorce, thus separating families, and suicide is one of the leading causes of death in the United States.

Where is God in the midst of such sorrow?

But even though we burned the bridge that brought us into communion with God, He made a way. Through the fire He brought restoration. He bridged the gap once and for all.

Yet some brokenness still remains. Although those who believe upon the Lord Jesus will be saved unto him, the world is still groaning for the Lord’s return. God’s people have received new hearts that are no longer broken, yet we still live in an innately broken world.

It’s in the most broken times that we cling to grace all the more. We must first understand the darkness before we can fully appreciate the magnificence of the light.

It’s in the most broken times that we cling to grace all the more. Click To Tweet

1. God uses brokenness to discipline those He loves.

“And have you forgotten the exhortation that addresses you as sons? ‘My son, do not regard lightly the discipline of the Lord, nor be weary when reproved by him. For the Lord disciplines the one he loves, and chastises every son whom he receives.’ It is for discipline that you have to endure. God is treating you as sons. For what son is there whom his father does not discipline? If you are left without discipline, in which all have participated, then you are illegitimate children and not sons” (Hebrews 12:5-8).

The correction we receive from God through suffering shows us that we are His children. A parent shows love to her child when she consistently redirects him in order to show him the proper way in which he should walk. A child does not simply learn how to walk on his own. First, he must be shown how to do so.

This idea seems upside down, does it not? The world tells us that we will only be happy if we’re successful and prosperous. But God doesn’t tell us this. In 1 John 3:13, John writes, “Do not be surprised, brothers, that the world hates you.”

We’re not promised prosperity, but we are promised tribulation and hatred. Yet we’re not left without hope. Jesus once said to His disciples, “I have said these things to you, that in me you may have peace. In the world you will have tribulation. But take heart; I have overcome the world” (John 16:33). Jesus promises that we will face tribulation and suffering, but He also promises peace. We can have peace because Jesus conquered death by His own death and resurrection.

To our mortal minds, it seems that we would know we are God’s children by our successful jobs, loving families, or our happiness within our circumstances. But we can take heart in the fact that God sovereignly places us in times of suffering because He loves us and is drawing us closer to Himself.

2. God uses brokenness to form us into His image.

There have been many times in my life when I believed I could learn on my own. My pride became a stumbling block to my growth when I believed I knew what was best and didn’t need correction. I wanted to prove that I have the strength to grow on my own, without the need of others correcting me and God guiding me. But this is similar to a tree believing that it doesn’t need sunshine or water to grow, but that it can simply grow by its own strength and willpower. It’s impossible.

When we mask our brokenness, we merely stunt our growth. It is when we fully acknowledge our reliance on the Lord that we grow and become more like Christ.

When we mask our brokenness, we merely stunt our growth. It is when we fully acknowledge our reliance on the Lord that we grow and become more like Christ. Click To Tweet

Suffering reveals that we don’t hold the keys to our own lives. We’re merely the painting. God is the painter. We don’t have any say about the picture he is creating. Instead, we simply trust that he maintains His sovereignty over every stroke of His brush.

In the end, when one looks at us, he shouldn’t see us. As one looks at a masterful painting, he doesn’t gaze upon it in awe that the painting did such a wonderful job being a painting. Rather, he would be in awe that there was one who exhibited the talent and the patience to create such a masterpiece.

Let that be said of us as we “Face trials of various kinds” (James 1:2). When others look at you, they should see the evidence of your Savior written over your entire life. Brokenness produces such evidence.

God uses every trial to reveal what is buried deep within the recesses of our hearts. Our thoughts and desires are revealed and refined, producing in us the fruit of the Spirit. Trials put our hearts under the X-ray of God’s Word, revealing any discrepancy in our walk with the Lord.

But this is why God ordains the suffering. Without the suffering, we would forget our need for a Savior. When the Israelites prospered, they turned to other gods for fulfillment. When all was well, they no longer relied on God for their every breath because they were not left wanting.

God gives his people many good gifts that we are to enjoy, but we shouldn’t be surprised when we face a storm. God promised that trials would come, but we don’t have any cause to fear them. The modern hymn by Keith and Kristyn Getty, “When Trials Come,” proclaims:

It’s in the very depths of the valley that God draws the closest. When we feel we cannot move another step, it’s there that God gently reminds us that He was guiding us all along. He places us under the fire in order to draw us to Himself. When He draws us to Himself, our sin is exposed and we become more and more like Christ, producing deep joy amid any circumstance.

No one desires to be broken. But brokenness is the only way one knows what it is like to be mended.

3. God uses brokenness to awaken the world to Himself.

One needs only to glance at the world to know that there is corruption everywhere we look. From ungodly politicians, to abortion, to broken relationships, to road rage, the world is a broken place.

But have you ever wondered what would happen if God restored the world back to the way it was in the Garden of Eden? If the world was in perfect order and provided flawless justice and satisfied its people, would we long for a Savior? If the Israelites had not been slaves to various countries, would they have cried out for a rescuer?

Without the disease, there is no cure. It is a grace that the world exists as it does today. God does not turn His face from the hurting. He is near to the brokenhearted. He uses the world’s brokenness to shine the beauty of the gospel all the more. The world must see its need before it appreciates the remedy.

As for injustice, God will repay on the Day of Judgement. The Lord promised that he will have vengeance on that last day, and his promises are irrevocable. Singer-songwriter Andrew Peterson wrote in his song, “Rise Up”:

He will rise up, and He will repay, but it’s not our responsibility to fret over His timing. Although it may seem that God doesn’t see our pain, He does indeed, and He is “patient in His anger.” The time of vengeance has not yet come, but it is coming. His timing is neither a second late nor a second early.

Paul writes, “For we know that the whole creation has been groaning together in the pains of childbirth until now. And not only the creation, but we ourselves, who have the firstfruits of the Spirit, groan inwardly as we wait eagerly for adoption as sons, the redemption of our bodies” (Romans 8:22-23). Brokenness causes all of creation to groan in longing for eternal restoration.

God uses the brokenness that we ushered into this once perfect world. We’re not only promised to be met with various trials, but we are also promised that the Lord will give us the strength to endure. The Holy Spirit guides us every step of the way, and though it may be hard, we can know that brokenness is a special kind of grace.

As J.R.R. Tolkien once said, “We can only come to the morning through the shadows.”