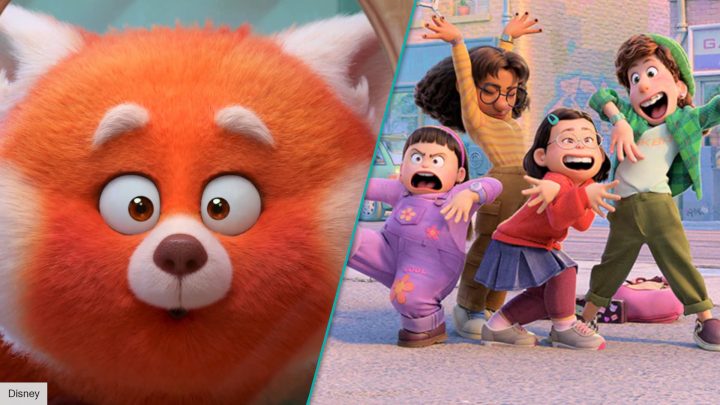 Pixar’s newest film, Turning Red, is clearly about puberty: as protagonist Meilin Lee enters her teenage years, she discovers that she is transformed into a giant red panda whenever she experiences strong emotions. What the film’s marketing has not made clear is who the intended audience is.

Rated PG for thematic material, suggestive content, and language, this is decidedly not a children’s movie. In and of itself, that isn’t a problem. Not every animated film needs to be geared toward the youngest common denominator.

A simplistic interpretation of the film’s message is that rebellion and disrespect are an ultimate good, and parental authority is an ultimate evil. The underlying issue Meilin pushes back against, however, is not her parents’ authority, per se, but rather her mother’s overbearing nature—i.e., controlling everything about Meilin’s life without caring about the development of her own preferences and personality.

Not even a solidly biblical perspective would consider human authority to be absolute and immutable. The apostles themselves even said, “We must obey God rather than men” (Acts 5:29). While parental authority over a teenager is an inherent good, it is not—or, rather, should not—be limitless in its scope and execution.

That being the case, it is understandable (to a degree) that Meilin considers her friends the most important people in her life, and that she wishes to assert her growing independence through going behind her mother’s back. On the other hand, this priority of one’s friends—and one’s self—over family is not treated with the sobriety and criticism such skewed allegiances warrant.

A Rebel Whose Cause is Herself

There are two statements Meilin makes that help decipher the film’s thematic core. First, at the very beginning of the movie, Meilin says honoring one’s parents shouldn’t be taken too far because “you might forget to honor yourself.” And second, in the film’s denouement, she boldly asserts to her mother, “My panda, my choice” (a declaration that noted critic Richard Roeper says “sticks out like a tweet more than an organic moment of expression”).

These two lines of dialogue provide a cohesive thesis statement for Turning Red. Meilin’s paradigm is a capitulation to the Western deification of the self as the ultimate authority. Some have called this expressive individualism.

In Meilin’s case, her individualistic “honor yourself” ethic is displayed thus: by commodifying her body in panda form (taking pictures with fans, selling panda-themed merchandise, and being the entertainment at a party for other kids) to fund her trip to a concert. But by literally selling herself to make money, she eerily resembles a real-world phenomenon: how many pubescent girls have shared pictures of their developing bodies with people who weren’t interested in them before, but who now find them fascinating.

To be clear, there is no discernible subtext of sexual objectification within the film itself. Nevertheless, Meilin obviously lacks the emotional intelligence to discern the true difference between honoring herself and dishonoring herself. And yet we as the audience are invited to sympathize with her misguided and repeated pursuit of expressive individualism.

Yes, there is a lot of passive rebellion in this movie. Meilin continually lies to and disobeys her mom, often at the encouragement of her friends. Sometimes this rebellion is even played for laughs.

In an especially cringe-inducing scene, Meilin (in panda form) intentionally aggravates her mom, who has just accused her of being crass. “Oh, that’s nothing,” Meilin replies. “You wanna see crass?” She then starts twerking and slapping her backside, taunting, “Is this bothering you? Take it, Mom! Take it! Take it!”

Now, I’ve seen it argued that this twerking isn’t so much an act of self-realization as it is an act to distract her mom so as to protect her from the long-lasting effects of a mystical curse. (If you’ve seen the movie, you’ll know what I’m talking about.) While this explanation makes a certain amount of sense, it fails to acknowledge the fallacy behind the “ends justify the means” thinking. Regardless of her intentions, a teenager rebelliously twerking at her mom is…well, a teenager rebelliously twerking at her mom.

Turning Red’s warped perspective can be better discerned by comparing it with another recent Disney film: Encanto. While these two movies are worlds apart, they both have a teenaged female protagonist who struggles under the domineering presence of a matriarch.

Both films explicitly address the burden children (or grandchildren) feel when expected to be perfect. But the way in which these themes are addressed are as different as a blood moon and a blazing candle.

These differences reach their peak in each film’s climax—between Meilin and her mother Ming in Turning Red, and between Mirabel and her grandmother (Abuela) in Encanto. It should be noted that both Meilin and Mirabel have legitimate critiques to make: Meilin is right about her mother refusing to give her any room to breathe; and Mirabel is right in discerning that their family home is being destroyed because of Abuela.

One can legitimately address the failings of an authority figure while maintaining a respect for the authority structures God has set in place for our protection. That being the case, the answer to one extreme (abject authoritarianism) is not the opposite extreme (abject rebellion), but rather firm and respectful dissent.

On the whole, this is where Mirabel succeeds, and Meilin fails. Mirabel is not a rebel; rather, when forced into a corner, she points out Abuela’s culpability in tearing their family apart. The goal is the good of the family, and to “save the miracle.”

Meilin, on the other hand, is a functional rebel with a self-centered cause: a (misguided) pursuit of her own (perceived) good. Right before her defiant twerking, Meilin shouts at Ming, “I like boys! I like loud music! I like gyrating! I’m thirteen. Deal with it!”

Again, the point is not that Meilin has no legitimate grievances, but that her rebellion is the wrong solution. Furthermore, we know from scripture and human nature that rebellion serves only to worsen, rather than resolve, family tension.

A Pixar Film in Name Only

There are many in our society who view rebellion, not necessarily as an inherent good, but more as an inevitable passageway between childhood and adulthood. I get the sense the filmmakers of Turning Red share this perspective (especially considering the additional material in Embrace the Panda, a making-of documentary about the film).

Despite what society tells us, rebellion is not some necessary evil for proper teenage emotional development. Click To Tweet

But despite what society tells us, rebellion is not some necessary evil for proper teenage emotional development. Turning Red fails to acknowledge this—with detrimental results.

This film is only one example of the “junior knows best” narrative trope. It won’t singlehandedly redeem rebellion in audience’s eyes. But the collective message of other films like it provides, as film critic Steven D. Greydanus puts it, “a virtual pedagogy in filial contempt and rebellion.”

Pixar’s filmmakers aren’t irresponsible for addressing teenage rebellion, but they are responsible for presenting it through rose (red?) colored glasses. They have exchanged the typical Pixar poignancy for discourteousness. A glorification of rebellion may not be the intent of Turning Red, but it is a functional side effect.

is the author of the curriculum Personal Purity Isn’t Enough: The Long-Forgotten Secret to Making Scriptural Entertainment Choices ( here ). As a cultural commentator, he has contributed to numerous print and online publications, including Zondervan Academic, The Christian Post, Crosswalk, and The Gospel Coalition. He writes regularly at Unpop Culture .

By Cap Stewart 11 months ago
2 comments