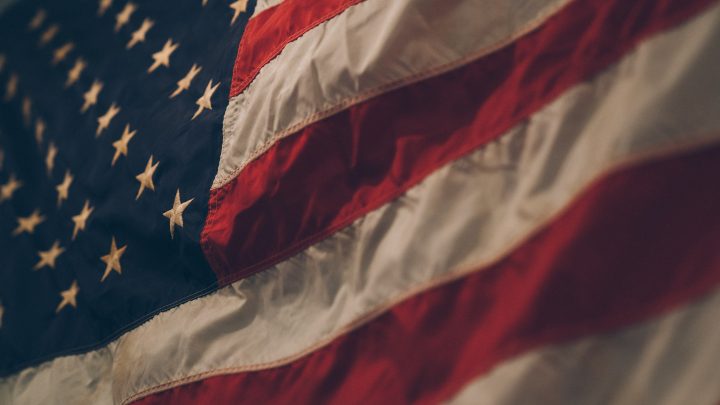 “I pledge allegiance to the Flag of the United States of America, and to the Republic for which it stands…”

If you live in America, these words are undoubtedly familiar to you, but sometimes they can seem rote and meaningless. When you recite the Pledge of Allegiance, do you really think about your liberty and our country’s values?

It may be hard when our country has values like abortion, racism, and homosexuality.

This question is one I personally struggled with when recent midterm elections came up. I could see with my very eyes that our country was far, far from unified.

Here are three ways that we can embrace a love for our country while not embracing all our country’s values.

Remember that Our Country Was Founded for God and By God

If you’re like me, when you think of “founding fathers,” Benjamin Franklin, Thomas Jefferson, and Samuel Adams come to mind. The ones who wrote the constitution, the Declaration of Independence, and formed our country’s laws.

The real founding fathers, in my opinion, were the pilgrims who came here for religious freedom.

Being oppressed by the Church of England, the Separatists left their homeland and family behind to venture to this land. By doing so, they risked their lives crossing the fierce Atlantic. If they survived the journey, the weary travelers encountered brutal cold and unfamiliar terrain when they reached the New World.

Why would they take such risks and endure such hardships?

Because they wanted religious freedom from the Church of England, who focused more on checking off the boxes than honoring the one true God. The Separatists tried to start their own churches in England, but many were ridiculed, jailed, or even executed.

The ones who founded our country were led by God and founded it for God. Nothing but grace brought them across that fierce ocean intact. Click To Tweet

In short, the ones who founded our country were led by God and founded it for God. Nothing but grace brought them across that fierce ocean intact.

Once they reached the New World, the pilgrims fell on their knees and thanked God for bringing them safely through the tortuous journey.

Needless to say, there were hardships ahead for the pilgrims. However, their suffering and loss were all worth it for the opportunity to worship their Savior.

When our country is being torn apart, it can bring us hope to remember that many of our founding fathers were men seeking to honor God in all they did.

Remember God Is Sovereign Over Our Country

There are days when I feel as if our country is spinning out of control. Recent court cases, elections, and arguments make me feel as if America is heading down a hopeless, no-way-out road to destruction.

When I lose faith that our country can be saved from its impending downfall, I’m losing faith in the ruler of that country.

We all know it, but sometimes we forget that God can do anything and everything He wants to in His divine timing. God has the ability to stop abortion right in its tracks.

Have you ever seen those picket signs in someone’s yard: “Jesus 2024?” Those signs are a wonderful reminder that whatever happens in our nation, God is sovereign over all of it.

God is in control. Christians can find rest in this truth even as we do our part to vote for biblical values, speak the truth with boldness, and take fervent action when and where we can. Click To Tweet

Although we may dislike or hate the direction our country is going in, God is still in control. God is still on His throne. Christians can find rest in this truth even as we do our part to vote for biblical values, speak the truth with boldness, and take fervent action when and where we can.

The president or Congress or the Supreme Court don’t ultimately mean anything.

God is still King over all.

Remember We Have the Ability to Fight for Our Country

When you read this subheading, what did you think of? Were you thinking, “I don’t have the ability or desire to become president?”

Well, I don’t either, but I believe that we can change our country for the better without leaving our own bedroom.

Have we forgotten prayer?

Think about it. Prayer can move mountains, part seas, and heal sickness. Prayer can bring people back from the dead.

Isaiah 40:15, says this: “Behold, the nations are like a drop in the bucket, and are accounted as dust on the scales…”

If the nations are like dust to the Lord, don’t you believe that He can change them?

Prayer, my fellow brothers and sisters, can change our nation.

We don’t have to stand by watching the U.S.A spiral down into destruction. We can be prayer warriors for the ultimate, immortal, forever King. We can participate in fighting against the sin our nation has fallen into.

Prayer can change everything. Will you join me, fellow Rebelutionaries, in praying for our nation? What are you waiting for?

Caitlyn Koser is a young homeschooled writer who lives in the Appalachian Mountains of Virginia. She loves Jesus, good books, and good friends. She loves reading and writing historical- and non-fiction. When not reading, writing, or making long cliche-replacement lists, she is usually outside in God's creation or quizzing her siblings on science trivia questions.

By Caitlyn Koser 4 weeks ago
2 comments