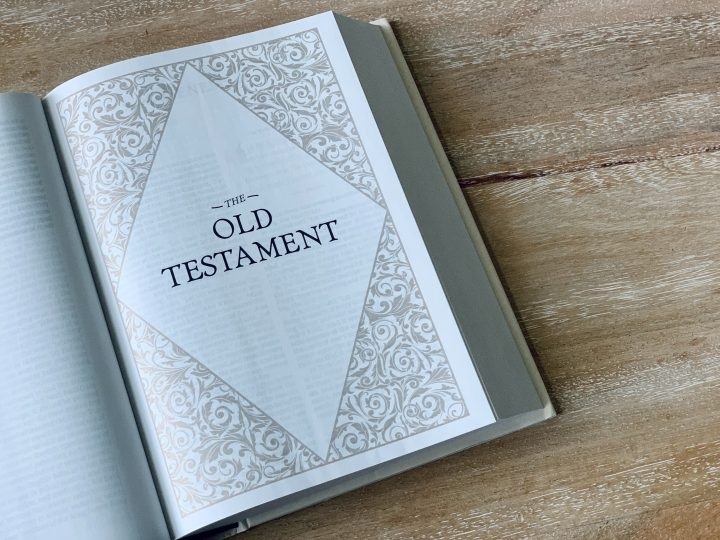 But the Bible is one story, split into two parts, but still a single narrative.

Jesus Himself claims that the Old Testament speaks of Him: “You search the Scriptures because you think that in them you have eternal life; and it is they that bear witness about Me” (John 5:39).

The Old Testament is filled with prophecies and visions of Jesus. If we unpack them, the Old Testament will come alive like never before as we see Jesus portrayed there.

God and My Grandma

In my own Christian walk, I did not begin to appreciate the impact of the Old Testament until I was 19 years old. That’s when I started taking my faith more seriously. Until that time, I thought we could learn about Jesus only from the New Testament. I knew nothing about Jesus’ presence in the Old Testament.

In my faith journey I credit my grandmother as being my spiritual parent. Ever since I was a young child, she would always tell me about Jesus and give me lessons from the Bible. She always had (and still does have) a piece of scripture on hand regarding any problem I was facing. When I reached the age where I felt drawn to read the scriptures on my own, she was naturally the first person I turned to. Eager to learn about God’s story and how He has interacted with us since the beginning, I thought that I would start in the Old Testament at Genesis and read straight through.

But my grandmother advised me to do the opposite: Start in the New Testament and only then go to the Old Testament. She told me that the entire Biblical story is about Jesus, and to see it that way I would need to read about His life first. I dove right in and finished reading the New Testament in a month. When I turned to the Old Testament, I started seeing the foreshadowing of Jesus from the very beginning that I had never noticed before.

When I finally finished, I was able to see exactly what my grandmother meant. I was able to appreciate the Old Testament much more because the New Testament helped me to see that it was all about Jesus the entire time.

All throughout the Old Testament is foreshadowing of Jesus the Messiah. It shows us who Jesus is: a promise from the beginnings of creation fulfilled. Click To Tweet

All throughout the Old Testament is foreshadowing of Jesus the Messiah. It shows us who Jesus is: a promise from the beginnings of creation fulfilled.

Jesus Shows Up Right at the Beginning

Many people don’t realize that Jesus shows up in the very first book of the Bible. The earliest prediction of the coming Messiah is the prophecy of Genesis 3:15. The theme of Genesis 3 is how the original human couple committed the first sin. God confronts Adam and Eve with the consequences that their sin will have throughout history. He then turns to Satan, who has appeared in the form of a serpent, and says,

“I will put enmity between you and the woman, and between your offspring and hers; He will crush your head, and you will strike His heel.”

In the highly symbolic language of Genesis, the seed of the woman is Jesus, and the rest of the verse refers metaphorically to Jesus’s crucifixion. To kill a snake, you must go for the head. Genesis is saying that in His crucifixion Jesus will defeat Satan (“He will crush your head”), though in the process, He will be hurt (“you will strike at His heel”). This verse is often called the protoevangelium, which translates to “first gospel,” because it is the first promise of a Redeemer.

Where else do we find signs pointing to Jesus in the Old Testament? One of the names that Jesus gave Himself is the “good shepherd.”

For example, Jesus says, “I am the good shepherd. The good shepherd lays down his life for the sheep,” (John 10:11). Jesus is intentionally describing Himself using language of the Old Testament.

Ezekiel 34:22-23 says “Therefore I will save My flock, and they shall no longer be a prey; and I will judge between sheep and sheep. I will establish one shepherd over them, and he shall feed them—My servant David. He shall feed them and be their shepherd.”

Because of this verse, the Jews of the time were looking for a Messiah specifically from the line of David. Jesus fulfilled this prophecy because He was a descendant of David. We learn to see who Jesus is more clearly when we view Him through the lens of the Old Testament.

A Messiah by Any Other Name

What other clues do we get about Jesus from the Old Testament? Jesus used a name for Himself that may seem unusual—Son of Man. He said, “Foxes have holes and birds of the air have nests, but the Son of Man has nowhere to lay His head,” (Matthew 8:20).

Where did He get that phrase from? An Old Testament reference to the “Son of Man” is found in Daniel 7:9-14. Here the prophet Daniel talks about the Ancient of Days (referring to God the Father) and His power and glory. “One like a son of man” came on the clouds of heaven and approached the Ancient of Days. He was given authority to rule over every people, nation, and language, and His dominion would never pass away.

Jesus is making the claim that He is that figure that will come on the clouds and be given authority over all nations and peoples.

is 21 years old and is a student at Houston Christian University. He is studying electrical engineering and pursuing a minor in mathematics. He was born and raised in Houston, Texas. He loves music, art, and spending time with his friends and family. Most importantly, he loves Jesus and professes Him as his Lord and Savior.

By Mason Robertson 1 month ago
4 comments