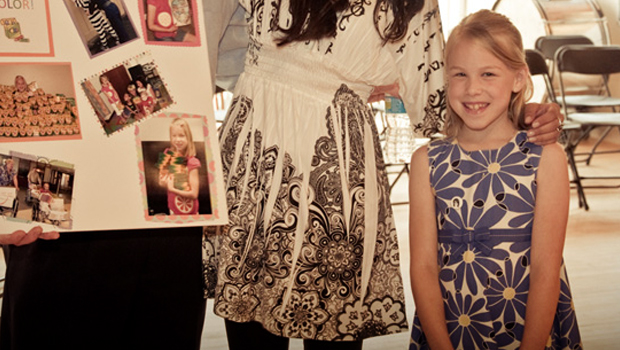 Abby Enck is only eight-years-old, but her story provides an excellent blueprint for rebelutionaries on how to make a difference. This shy girl found a cause close to home (supporting her brother who has cerebral palsy) and took one small step to meet that need (raising $4.50 selling lemonade to buy crayons).

Once she had developed a successful model, she multiplied it (buying crayons for other kids too and equipping other people to sell lemonade) and that is only the beginning (she is going to buy DVD’s next year and wants to become a special education teacher when she grows up).

We hope Abby’s story will encourage you that starting small is better than doing nothing. Whether it is raising money for Haiti, witnessing to friends at school, or volunteering to help out at church, remember that God can do great things when we make ourselves available. So, stop making excuses, and step out in faith!

But 8-year-old Abby Enck found a way to use her refreshing entrepreneurial enterprise to bring some color into the life of her 6-year-old brother Cameron and his cohorts at Lutheran General Children’s Hospital in Park Ridge. Cameron was born with Cerebral Palsy.

“It’s hard sometimes to have a sibling with a disability, but Abby is a really great sister,” Abby’s mother Becki Enck said. “I’m amazed by her everyday. She’s a very giving, thoughtful, gentle person.”

Cameron was diagnosed with the disease when he was just one week old. Big sister Abby has accompanied him to almost all of his appointments, and she noticed that the kids at the hospital liked coloring.

So when Abby made $4.50 from selling Delicious lemonade to neighborhood locals, she decided use the money to buy 36 boxes of Crayons for Cameron and the other kids at the hospital.

“Cameron’s doctor loved it,” Abby said. “I really like to color, and I thought the kids would love it too.”

When 2010 rolled around, Abby thought she could best last year’s donation. So rather than sling lemonade on her own, she created “lemonade kits” consisting of a bottle of water, a packet of lemonade and a homemade tag that explained her goal. Abby made 52 kits and recruited family and friends to help sell them for $1 each.

The franchise idea turned out to be Crayon boom-town, and Abby has been able to purchase 869 boxes of Crayola Crayons so far this year. She hopes to make it to her goal of 1,000 boxes in the next few weeks.

Officials at Lutheran General are thrilled.

“What’s special about this donation is that she took it upon herself and made it personal,” Lutheran General communications manager Nate Llewellyn said.

It doesn’t hurt that the kids at Lutheran General love using the gifts.

“Coloring is a great creative outlet for kids,” Llewellyn said. “It helps them work through any issues they may be going through and take their mind of metal or physical pain. It really creates a sense of home, safety and comfort for them.”

Becki said Abby handled the whole operation herself: She created a to-do list, compiled a list of family and friends that she planned to reach out to, designed a company logo on the computer and came up with a slogan: “If life gives you lemons, COLOR!”

The whole experience has been good for Abby and Cameron.

“She used to be very shy, but this is really bringing her out of her shell,” Becki said. “She wants to share and this is something exciting that she can be recognized for.”

Abby says the best part about making the kits is buying and donating the Crayons. When her mother asked what she had learned from the project, the 8-year-old replied, “Everybody can make a difference”.

Abby will deliver the next batch of Crayons to Lutheran General on July 25. In the meantime, she continues to be a supportive, caring sister.

“Whenever Cameron is having issues, she always says things will be okay,” Becki said.

Cameron’s treatments include a demanding set of therapy sessions that focus more on cognitive work than physical rehab. The sessions work to progress Cameron’s developmental capabilities. The doctors and therapists at Lutheran General have taught Cameron to play with toys, try new things and sign words like “thank you,” “more” and “please.” And Cameron continues to learn, with his sister always by his side.

“She really puts the saying ‘When life gives you lemons, make lemonade’ into practice,” Becki said. “She is always looking on the bright side.”

The bright side for Cameron is that he’ll join his sister in elementary school when he enters first grade next year. Abby will surely help him along the way: She says she wants to be a special education teacher.

“We are so proud of her, and we know that whatever she does, she’ll go onto great things,” Becki said. “She’s just got a great compassion for people.”

Abby already has big plans for next year. She’s going to upgrade from handing out Crayons to handing out DVDs. How refreshing!