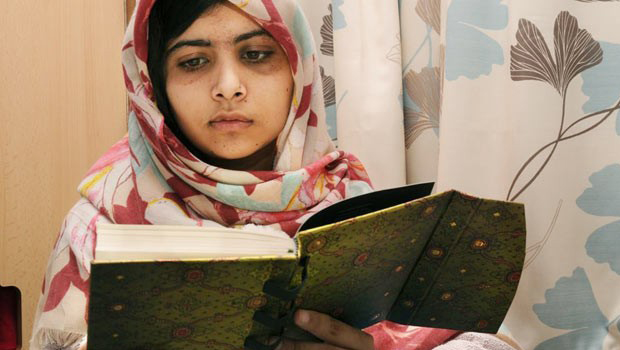 Can young people still change the world today? Absolutely. And there’s no better example than Malala Yousafzai, the young Pakistani teenager targeted by the Taliban for advocating education for all children — boys and girls.

Malala’s story was front-page news in October 2012 when she was shot in the head and neck by Taliban gunmen while returning home on the school bus — but she refused to die. She was flown to Great Britain where she underwent a miraculous recovery, aided by doctors, surgeons, and the prayers of millions around the world.

Five months removed from the Taliban’s brutal attack, Malala is back in the fight, authoring a memoir, and launching a global fund to further education for girls. Watch the video above, read the story below, and then check out what you can learn from Malala at the bottom of this post:

LONDON — The Pakistani teenager who survived an assassination attempt and inspired a worldwide movement for girls’ education will soon become a published author.

Malala Yousafzai, 15, says she wants her book, “I Am Malala,” to reveal and help children across the world who still struggle to get to school.

“I want to tell my story, but it will also be the story of 61 million children who can’t get education,” she said in a statement released by her British publisher, Weidenfeld and Nicolson. “I want it to be part of the campaign to give every boy and girl the right to go to school. It is their basic right.”

Yousafzai was shot by Taliban gunmen in her native Swat, Pakistan, last October. After emergency surgery in Pakistan she was flown to Birmingham, England, for medical treatment and has just begun school. The book will document the shooting, her survival and her recovery, which have turned her into a global ambassador. She has been nominated for the Nobel Peace Prize and was runner up for Time’s Person of the Year, behind only President Obama.

“Malala is already an inspiration to millions around the world,” said Michael Pietsch, executive vice president and publisher of Little, Brown, which will publish the memoir in the United States. “Reading her story of courage and survival will open minds, enlarge hearts, and eventually allow more girls and boys to receive the education they hunger for.”

Ziauddin Yousafzai, Malala’s father and the founder of the Pakistani school she used to attend, told ABC News today that she was very happy back in class. She likes her new friends, he said, and intends to finish her General Certificate of Secondary Education, or GSCEs, in Birmingham. By then she will be 16 and consider attending another school for her Advanced Levels — the equivalent of the last two years in high school in the United States.

Malala’s cause still needs urgent attention, especially in Pakistan. This week, Malala and her father became the first two signatories on a petition dedicated to Shahnaz Nazli, a girls public school teacher who was killed on Tuesday near the Afghan border. Nazli, 41, was about 500 feet from work when a car with gunmen drove up, shot her, and sped away. Nobody accepted responsibility, but local officials said the killing matched previous Taliban targeting of girls school building, workers and students — including Malala.

Most of us live extremely safe lives. Malala didn’t. She publicly campaigned for something that was getting other activists killed. She kept speaking out even after being threatened by the Taliban. She continues to fight even after being shot at point-blank-range by terrorists. What can we learn from her?

Stop being afraid. Malala knew her cause was more important than her personal comfort and safety. She was willing to risk her life so that other girls would receive an education. Her example reminds us that the “persecution” we face (e.g. teasing, shunning, etc.) is kid-stuff compared to real persecution. We need to swallow our fears and stand up for what’s right.

Do hard things for others. Malala didn’t have to campaign so publicly for education. She could have quietly pursued her own studies and avoided drawing attention to herself. Instead she chose to risk her own education (and life) in order to speak up for those who would not or could not speak up for themselves. Are you willing to risk everything for your cause? Or do you prefer to be safe?