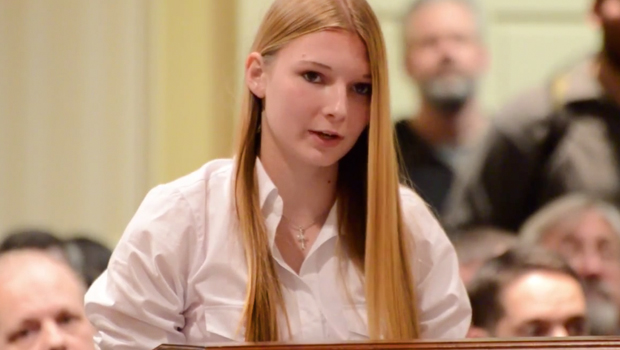 Who cares what a teenager thinks about gun control? Apparently a whole lot of people. Sarah Merkle’s three-minute speech before the Maryland State Legislature has vaulted the 15-year-old onto the national stage — and garnered over 2.3 million views on YouTube. Watch the video, read the story, and check out our commentary below to see what you can learn from her example:

A teenage girl skyrocketed to the center of the gun control debate when a YouTube video of her three-minute pro-gun speech went viral, acquiring more than 2.3 million views.

Sarah Merkle, 15 of Maryland, has been shooting guns for almost eight years and is a member of the Maryland Rifle Club and Maryland State Rifle Club. She says in the video that signing anti-gun legislation would not be doing away with gun violence but rather “liberating American citizens of our constitutional rights.”

Merkle, who says that her favorite rifle is a Bushmaster, makes a gripping plea to legislators who are considering passing legislation to enact stricter gun control laws.

In her testimony, Merkle tells that she has become eligible for various shooting scholarships at prestigious universities, and the laws proposed would interfere with her eligibility to join their shooting teams.

“Achieving stricter gun control laws would obliterate any opportunity I could have had to attend a decent college on a shooting scholarship,” she says.

A provision in the Maryland law makes it more difficult for residents to transport their firearms across the state border. In the case of Merkle, it is problematic because she would be unable to shoot at a range that is located over the border in nearby Delaware. Stricter gun laws would hinder her ability to practice.

In her plea in front of Maryland State Legislature in Annapolis, Merkle says that guns are not the problem, people are.

“Purging our society of violence and murder cannot be done by gun control legislation.” She continues, saying that in passing legislation,”You are not eliminating guns from society but eliminating our ability to protect our lives, liberty and pursuits of happiness.”

Regardless of what position you take on gun control, we can all learn from Sarah’s example. As far back as the young prophet Jeremiah in 626 BC, young people have been responding to the call of God with some variation of, “But I don’t know how to speak, I am only a kid. No one will listen to me anyway!” Sarah’s story suggests a different reality — one where our youth is an asset, not a liability.

Sarah’s video got 2.3 million views because she is 15 — not in spite of it. Let’s be honest, Sarah wasn’t saying anything that hundreds of middle-age men haven’t already said. Moreover, her delivery wasn’t stellar. No doubt she was nervous. She spoke quickly. She was mostly reading from her notes. But 2.3 million people heard her speech because her age was a megaphone.

Of course, it helped that she had written a good speech. Yes, it helped that gun control is a huge, hot-button topic. But ultimately, Sarah’s age was the highlight of her video. Despite the rampant low expectations (or perhaps, because of them) our world is desperate for teens who care, who are informed, and who speak up.

What about you? What issues do you care about? Have you decided to keep quiet because “no one will care”? Have you told yourself no one will listen because of your age? Consider what Sarah was able to accomplish and change your perspective. Start viewing your age as an asset — a gift to be carefully stewarded — and use the megaphone while you have it.

How will you use your megaphone?