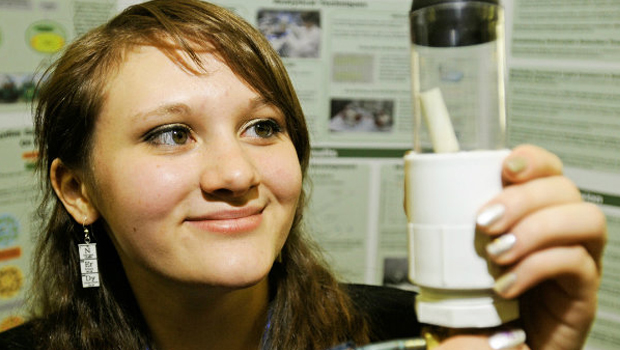 Algae biofuel has often been floated (no pun intended) as an alternative to other biofuels — but the problem is to get the plants to produce enough oil to compete with petroleum-based fuel. Enter Sara Volz, age 17, a young scientist who made an amazing breakthrough in the lab she built under her bed.

When a teenager has something growing under their bed, it’s usually the mold on a peanut butter sandwich forgotten among the clutter they don’t want their parents to find.

But growing under the bed of 17-year-old high school senior Sarah Volz may be the answer to a question that’s stumped the largest oil companies in the world: How do you make algae biofuels financially viable so they can replace petroleum-based fuels at the gas station?

Volz, the winner of the 2013 National Intel Science Talent Search, may be on track to solving this problem, all from the lab that’s she’s built under her loft bed in her parents’ Colorado Springs, Colo., home.

In her research she developed a process of artificial selection where she killed off algae with low levels of acetyl-CoA carboxylase (ACCase), an enzyme crucial to lipid synthesis. Left behind in the beakers under her bed were an efficient bunch of high yield algae, which she discovered produced a significant increase in lipid production.

The world’s largest oil companies have invested hundreds of millions of dollars and years of research looking for ways to make algae biofuel cost effective, but they’ve been unable to develop predictable, high yield algae that would make it financially viable.

Rex Tillerson, chairman and chief executive of ExxonMobil Corp., told Bloomberg News that he believes we’re still at least 25 years away from filling our diesel engines with algae biofuel because scientists haven’t been able to develop strains of algae that produce enough raw fuel, among other technical issues.

Thanks to Volz we may be able to shave some of those years off of Tillerson’s prediction. So how did she celebrate winning the National Science Fair and the $100,000 scholarship? Ice cream, of course. Maybe Exxon should build a sundae bar in their cafeteria.

This is just one more example of teenagers putting their minds to work on big problems and coming up with novel solutions. Of course, Sara hasn’t completely solved the bio-fuel dilemma, but she’s drawn the world’s attention to a simpler and cheaper approach — all from her bedroom lab. Here’s the lesson from Sara:

Don’t just leave it to the experts with the big budgets. Sara wasn’t intimidated by the fact that some of the largest corporations in the world were investing hundreds of millions of dollars into solving the problem she tackled. She put her mind to the task and came up with a solution that had evaded everyone else.

What about you? What problems exist in your family, school, church, or community? Are you leaving the problem-solving to the grownups? To the experts? To the people with authority and resources at their disposal? Why not put your mind, heart, and energy to work at coming up with a solution?