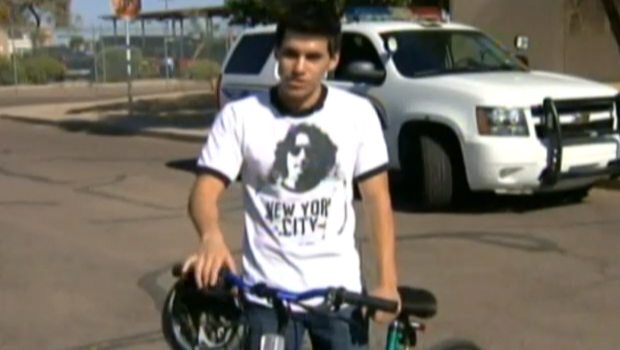 You might think that kids today are entitled and self-absorbed, too busy watering their virtual tomatoes and tweeting their breakfast to know the meaning of hard work. But every now and again a story comes out that seems to bust this myth. The latest comes from Arizona, where a police officer pulled over a teenager who was walking down the street late at night.

Phoenix Police Sgt. Natalie Simonick, 46, spotted a young man walking alone through a desolate neighborhood at 11 p.m. When she asked him what he was doing, Christian Felix, 18, replied that he’d missed the bus, so he was walking the nine miles home from his job at McDonald’s, reports local station KNXV.

Simonick offered him a ride, and while talking to Felix became increasingly impressed. Felix didn’t drink or smoke, and had never been in trouble with the police. She asked why he didn’t ride a bike home, and when he replied that he didn’t own a bike, and had never learned to ride one, Simonick decided to give him her spare. And she arranged for her employer, the Phoenix Police Department, to give him a bike-riding lesson.

“It’s really something when someone comes off on the street and offers to do a kindness for you,” Felix told KNXV. “These days you don’t see anything like that.”

In February, another hard-working teenager’s chance meeting made news. Jhaqueil Reagan, also 18, and from Indiana, was hiking the 10 miles through an ice storm to interview for a minimum wage job at a thrift store, when he stopped to ask a man for directions. He confessed to the stranger that he couldn’t afford the bus; his mother had died two years before, and since then he’d been staying home to care for his siblings.

Question: Do you have a job this summer? Tell us about it in the comment section. There are currently __ Comments.