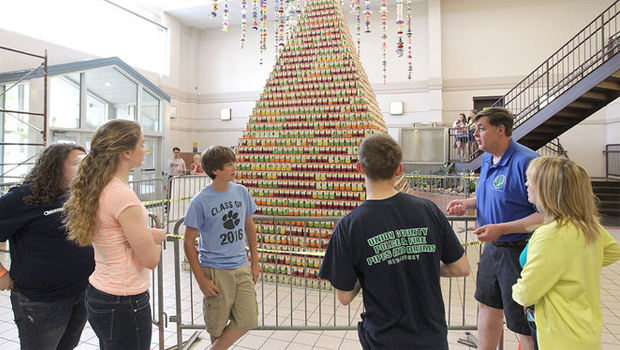 It began with a group of Cranford teenagers and spread across the township in a effort to help others, and maybe set a world record.

Last Saturday, after months of collections, the township Teen Advisory Board assembled more than 28,000 cans of food into a pyramid, breaking the Guinness Book of World Records by more than 8,000 cans, a group leader said. All of it will go to the Community Food Bank of New Jersey in Hillside to aide people less fortunate.

“It really did turn into a township-wide project, which is kind of cool,” said Mark Dingelstedt, the volunteer co-chairman of the board. He praised the teenagers’ persistence. “They gave a 110 percent,” he said.

In the end, Dingelstedt said, the students were not alone. Engineers gave technical support. A construction company provided scaffolding. Firefighters helped with construction and donated money. Restaurants sent meals for the volunteers. School officials, Boy Scout leaders and the Police Athletic League all pitched in.

Students had pursued many opportunities for collecting cans.

“A lot of cold mornings outside of stores,” said Alexandra Tanagakos, 17, and a Cranford High School senior. “It was worth it,” she said. Not only were students going for a record, she said, but “at the same time we’re helping others.”

Question: What do you think of this project? Could you do something similar in your community? You can leave a comment by clicking here.