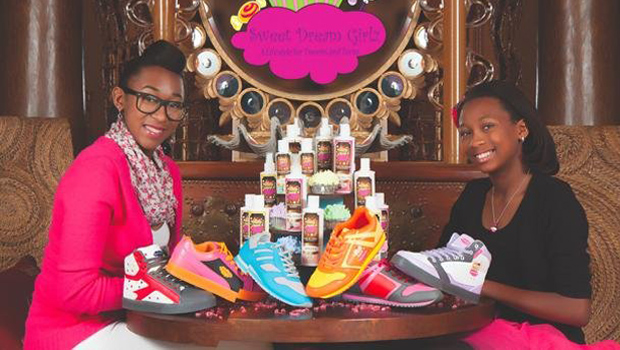 (Yahoo!) – Halle Holmes was 10 years old in 2010 when she came home empty-handed and aggravated after a trip to the local mall. As hostess of an upcoming spa party, she had her heart set on finding all-natural beauty products in fun fragrances that her girlfriends would like and her sensitive skin could tolerate.

“We didn’t want to smell like lavender and sweet pea. We wanted something youthful smelling,” she says. Downright indignant that no such product existed, Halle says she turned to her teenage sister Brea and said, “Why don’t we start our own?”

As the saying goes, necessity is the mother of invention. The Holmes sisters began researching their idea online, tapped their family dermatologist for advice, and sent their mom out to investigate a few cosmetics manufacturers they identified.

With $6,000 in startup funding from their parents, Halle and Brea officially launched their beauty products business the same year. Named Sweet Dream Girlz for a favorite Beyonce song, the Holmes’ line of moisturizers, cleansers, lip balms, and hair products are paraben- and talc-free, feature shea butter and natural oils, and come in “yummy” scents like Pink Sugar and Iced Lemon Cookie.

From sales online, at trade shows, and in specialty stores nationwide, the business generated more than $25,000 in revenues its first year, and $42,000 in 2012. According to mom Lisa Holmes, Sweet Dream Girlz is profitable, but all income goes right back into the company to support marketing and new product development.

The young entrepreneurs—now 13 and 19—have been featured in USA Today, Tigerbeat, local television news, and various other media. They were invited to the 2012 Nickelodeon Kids Choice Awards where their products were featured in the swag bags. And they’ve made it to the final casting call for season 5 of ABC’s Shark Tank.

Leave a Comment: Have you had a good idea for a product? What’s stopping you from making it yourself? There are currently __ Comments.